YEAH YEAH YEAHS Smash It Up in Los Angeles 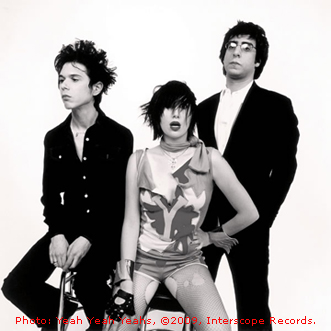 ‘It's Blitz!’ the Yeah Yeah Yeahs third album proper, is out now and creating legions of new fans, as the band sells out rock venues around the world. ‘The Hollywood Sentinel’ had the pleasure to attend the sold out show September 17th, 2009, at the Greek Theatre in Los Angeles, which was opened by the infamous punk feel-good band ‘Yacht,’ and 90’s power legend ‘The Breeders,’ headed by the legendary ‘Kim Deal,’ formerly of the phenomenal band the ‘Pixies.’

As the music started with lights and a curtain blocking their view for a number of moments, the crowd roared, as the curtain slowly rose to the band playing around 90 minutes of great material. This incredible show was one of the most memorable of all, with a perfect summer feeling night beneath the stars and trees here, in Autumn. Thousands of adoring fans of all ages packed the venue, from the pit, to the bleachers and balcony. There were no teenage riots.

A few songs in to her set, Karen O. yelled out, ‘Hey every body! Stand up and dance! How can you dance in your seats?!’ And at another moment, ordering everyone to clap their hands. Karen O. seems to love what she does, and she demands that her audience have a good time as well, and we did. The bands newest hits, Heads will Roll, Zero, Gold Lion, etc, were played early, as well as Cheated Hearts, and more. With a pristine sound system at the Greek, Karen O’s voice sounding amazing, and fierce delivery by her and the band, this show went down as a massive success in rock and roll history.

Tearing between sweet ballads with soft feminine beauty, to elegant pop perfect pitches, Karen O. shifted quick with ass kicking punches to belt out some beautifully angry screams at intricate moments amidst brilliant songs. Rock and roll has rarely sounded or been delivered so good as by The Yeah Yeah Yeahs.

Nick Zinner, Brian Chase, and the explosive Karen O. comprise the band, who built a steady power of incendiary force that began in 2003 in NYC, and has skyrocketed with masterful jams across continents over six short years, becoming what Subnormal Magazine put on its list as one of the ‘Top 10 Greatest modern rock bands of our time.’

Sexy singer Karen O tells us, ‘I just love the feeling of getting on stage and the audience screaming for us to play our songs.’ And scream they do, for good reason. Check out their music below, and our last article one amazingly cool band.