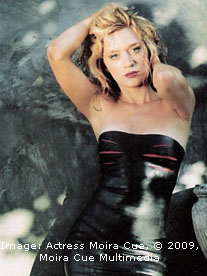 The first time I had the honor to be introduced to Moira Cue, I was sent one of her paintings through the internet, and a photograph of herself from a fashion show. The first thing I thought was, what a beautiful, great painting it was. I was also upset that some one was trying to play a trick on me by having torn out and scanned a masterpiece painting from Picasso from an art book, and a photo of a pretty girl and told me the model was the artist.
I racked my brain for some time thinking of where I had seen the painting (pictured on next page). After some lengthy E-mails, and finally a phone call with Moira Cue herself, I found out the shocking truth. This beautiful woman was not only the actual painter, she had also created over 1000 other works of art, equally impressive. And she was an actress, writer, and singer. I was blown away. With artwork in the collection of Madonna, appearances on E! and Chicago Tonight, and songs that have been praised by some of the biggest names in music, Moira Cue is creating her mark in the world of entertainment as one of the greatest prodigies of our time. The following is our exclusive interview with her.

An Exclusive interview with Moira Cue

The Hollywood Sentinel: What advice do you have for young girls that are seeking to move to Hollywood to pursue a career in the entertainment industry?
Moira Cue: You can’t become famous on your own. You also won’t become famous just by being really interesting. (You may have some luck, but it takes professionals with connections to parlay your good luck and exposure into a career. The people who are going to help you are going to want one of two things: money, or something else. You are better off working with people who want money, but only if they understand that you can make them money, not just give them money for the services they offer. (I'm not saying you don't need services: That goes without saying). To be a money maker, you have to sell yourself as a professional – An attitude that won’t keep you employed as a waitress isn’t going to fly when the stakes are higher.

Before you get to L.A., save money. Get a car with a navigation system. Understand the difference between confidence and arrogance. Convince others to make money with you.

The Hollywood Sentinel: What are the biggest themes you tend to explore in your artwork, and why?

Moira Cue: Much of my earliest visual art references the rich tradition of women in art history, as visual icons. These women tended to be the love objects of male artists; yet, when we think of these men, the images that come to mind are of their models. What we value visually and verbally are two different things. A number of years back I heard a lecture at a Chicago bookstore by the author of “The Goddess and the Alphabet” who explained that this gap is due to left brain/right brain differences. It made sense to me. I think of these works as partnerships. That is in addition to appreciating women’s ability to actively create art: Women such as Paula Modersohn-Becker, Georgia O’ Keefe, etc.

More recently I have been interested in the formal essentialism of picture making, simplistically: the division of a (typically) four-sided picture plane, with vertical and horizontal lines. In 2004 I created 365 black and white pictures (one a day) of non-Arabic fonts. The series has yet to be exhibited. What interested me was how similar the history of calligraphy is to art. On one hand, you have a flat picture where motion is suggested through these diagonals and such. With letters the implication of this division is to reference sound. Now you have computers and the phenomenon of pixelation, where the organizing principal is still a stacked box, but now it is a color tone that fills the space to create meaning. I was interested in letters that had no meaning to me, from my Western vantage point, because I thought I could find a visual meaning in the representation of sound when the traditional interpretation of those characters was blocked.

The Hollywood Sentinel: In your music, and why?

Moira CueMost of my songs start from something personal, but then, the story changes from something real into a bit of theatre. I create a character who is singing the song. Once the character was me, but by the time the song is finished, it is a fictional person something like me. Not everything that I sing about really happened, or is convoluted. My songs are emotionally true, but historically, not so much.

The Hollywood Sentinel: You have been described as a feminist artist. Who is one feminist that you identify most with, and why do you?
Moira Cue: I came of age in Madison, Wisconsin, during the apex of the political correctedness. The theorists I explored at that time were women such as Mary Daly, whose work made a profound impact on me. Later I attended the School of the Art Institute of Chicago. The majority of feminists on the curriculum there were prostitutes and pornographers, the Annie Sprinke types. Between these two extremes, I can only identify with myself.

The Hollywood Sentinel: What makes you a feminist?

Continued on next page.
© 2009, The Hollywood Sentinel / Moira Cue MultiMedia, All rights reserved.