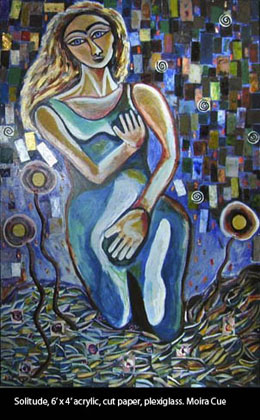 Moira Cue: I am a feminist because I do not wish to be limited in what I achieve because of my gender. I also don’t want to make less money just because I’m not a man.

The Hollywood Sentinel: What is the biggest issue facing women today that needs changed?

Moira Cue: In many countries, women still lack equal access to education, or to make choices about who or if or when they will marry. In every country, women, as a whole, live in some degree of fear of sexual violence. The biggest issue is probably money. In every field women are paid less than their male counterparts. There are explanations - usually a polite way of saying, “but you’re worth less.”

The Hollywood Sentinel: What painters, musicians, and actors do you admire most, and why?

Moira Cue: One thing I’ve been very lucky to do since arriving in Los Angeles, is attend many red carpet premieres. I know first hand how much work goes into getting ready for one of these events, and I am really into fashion, so the actors I admire are the women who always look good on the red carpet. Diane Kruger and Olivia Wilde have been looking exceptionally well-coiffed at every turn. As a child I went through a period of watching Turner Classics. I was mesmerized by Claudette Colbert. Today I will go see any movie if Meryl Streep is in it. If I could pick any actress to be friends with, it would be Jennifer Aniston. She comes across as trustworthy.

As for visual artists, there are painters I admire because they can paint, and painters I admire because they succeeded in turning themselves into celebrities with big paychecks. I am always looking for new art to find beauty in. Going back to my childhood, in order, I have gone through at the age of six, an infatuation with Degas’ ballerinas, at eleven Botticelli’s Venus (modeled on his cousin, Sonetta Vespucci) and Cy Twombly’s On The Wilder Shores of Love, which I saw in Milwaukee, at thirteen Gustav Klimt’s The Kiss, at seventeen, the Clouzot film Le Mystere Picasso, in college, the cave paintings of the Chumash, as well as the art of my professors and fellow students.

In my early twenties I went through periods of (…) Janis Joplin (and) Frida Kahlo. I respect Madonna’s personal strength and commercial achievement. I have a huge appreciation for a number of women from the Golden Era of Jazz, notably Nina Simone and Eartha Kitt, both of whom, sadly, we lost in this last decade.

The Hollywood Sentinel: What are some things you love about Los Angeles?

Moira Cue: I love that this is the entertainment capitol of the world. This is the town where dreams come true. The weather and the beach are icing on the cake.

The Hollywood Sentinel: What are some of your favorite things to do in L.A?

Moira Cue: Every time I get to perform or do a publicity event it is a total high. Recreationally, I enjoy going to concerts, from classical symphonies at the Walt Disney concert hall to bands like the Yeah Yeah Yeahs which I just saw at the Greek theatre. I like to stay fit by running on trails or along the beach, as well as swimming in the ocean. There are also a lot of great restaurants in LA and I always enjoy eating out.

The Hollywood Sentinel: What is your life’s motto that you live by?

Moira Cue: A few years back, I went through a hard time where I was very alone. It was around the time that my aunt, Mary Harycki, a poet, passed away. One of the things she left me was a vocabulary book. In that book I found my motto: Gold is immune to acidulous agents.

The Hollywood Sentinel: How do you want to be remembered?

Moira Cue: As a mystery.

Moira Cue performs an special acoustic set, with Mark Woolley on guitar, on Monday, October 26th, 2009, at 8pm, at the legendary Viper Room, in Hollywood, California. For ticket information contact 310-226-7176.