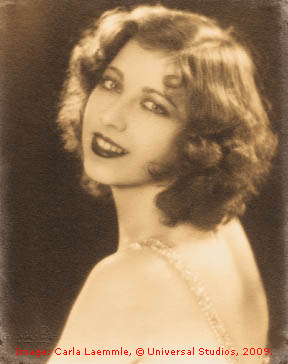 Born in Chicago, Carla Laemmle’s birthday is a celebration of over eight decades in cinema. The actress has lived a most extraordinary life, growing up on her uncle’s Universal lot and witnessing the early years of Hollywood’s growth. At just 16 she was the prima ballerina who danced in the Lon Chaney classic The Phantom of the Opera (1925). She also spoke the first lines in Universal’s first ‘talkie movie’ Dracula (1931) starring Bela Lugosi, the classic horror film that established the beginning of Universal Pictures’ success and legacy in popular horror films.

In May 2009, Laemmle co-authored a book with Daniel Kinske, Growing Up With Monsters: My Times at Universal Studios in Rhymes, detailing her experiences growing up on a motion picture studio lot. The instant hit offers an introduction by sci-fi legend Ray Bradbury. Laemmle continued to star in small roles until the late 1930s and recently became the subject of two works titled after her immortal opening lines; Among the Rugged Peaks: An Intimate Biography of Carla Laemmle by Rick Atkins, and the film documentary, Among The Rugged Peaks, by actor, producer, director, and biographical journalist Tom Tangen, a red carpet favorite who has interviewed over 2,000 celebrities. The film, edited by Emmy-winning Mary DeChambres, will debut in 2010 from Elusive Entertainment.

The VIP private, invitation-only event will begin with a special red carpet reception. Celebrations will include Laemmle’s Lifetime Achievement Award Ceremony, a ballet performance organized by Famous Monsters of Filmland’s Robert Aragon, who also presents the event, and a presentation by actor Tom Tangen. Mr. Tangen is represented by Starpower Management LLC.

Check out a sneak peek of Carla Laemmle, interviewed by Tom Tangen here below, an interview like only Tom Tangen could capture, and the charming, beautiful spirit and presence of the living legend, Carla Laemmle herself.