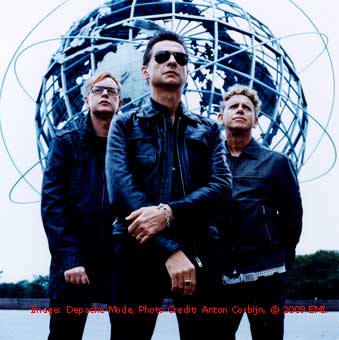 Named by the Hollywood Sentinel as one of the top 20 greatest ‘dance - rock’ bands of all time, the groundbreaking, chart-topping electronic legends Depeche Mode returned this year with one of their most intense and and diverse albums ever. ‘Sounds Of The Universe’ finds Martin Gore, Dave Gahan and Andy ‘Fletch’ Fletcher back at the top of their game after being a force of power for nearly 30 years. Eclectic and energized, they sound like a band reborn.

With global sales in excess of 100 million, including Number One albums and dozens of classic singles, Depeche Mode belong to a select premier league of legendary groups alongside U2, Pet Shop Boys, and Sonic Youth, who have survived from the early 1980s with their ideals, their creative vision and their core members intact. They overcame internal friction and critical hostility to become one of the most influential bands on the planet.

Musically, Sounds Of The Universe will please fans of every age and taste. From Dave’s overlord chant on the mighty first single, ‘Wrong’ to Martin’s velvet-lined Scott Walker croon on the sensual lounge-music ballad ‘Jezebel,’ and from the sci-fi gospel-blues hymn ‘In Chains’ to the sultry electro-glam powered ‘Corrupt,’ this is classic Depeche Mode at its finest.

As they approach their 30th anniversary, Depeche Mode are on a personal and musical high. Old tensions have been resolved, hatchets buried and bad habits conquered. Recorded in Santa Barbara and New York, Sounds Of The Universe was born from positive creative chemistry, and it really shows.

‘It’s a tremendous record, just to blow our own trumpet,’ laughs Dave. ‘We’ve had the luxury this time of recording a lot more songs than we really need, all of which have been of great quality.’ The Hollywood Sentinel adds, ‘He’s not kidding folks!’ Martin Gore continues, ‘All of us have had a really good time being together, The overall atmosphere in the studio has been fantastic…We were very focused.’

The album title, Sounds Of The Universe has various meanings, from its spiritual subtext to its retro-futuristic arrangements. ‘We’ve used a lot of old analogue synthesizers and drum machines, which conjure up image of the universe and space travel somehow,” Martin explains. ‘We’ve gone back to a lot of old vintage gear, without making the album sound too retro. It’s like yesterday’s future. That’s why for me it’s a perfect album title.’

Like Playing The Angel, Sounds Of The Universe features writing credits for both Martin and Dave. After honing his talents on two solo albums, Dave has earned his place as Depeche Mode’s second songwriter. ‘The fact that Dave has started writing songs has done a lot of good for the band because his confidence is much higher now,” says Andy. ‘He feels a lot more attached to the band because of that.’ In fact, Sounds Of The Universe is the closest collaboration yet between Depeche Mode’s two main songwriters. br/>
Martin and Dave share vocals on several songs and they have even co-written one track on this record. It felt like ‘a true partnership,’ says Dave. ‘I think in a blind test people would find it difficult to tell who wrote which songs,’ adds Martin. For Martin, another album highlight is ‘Peace’, with its sublime techno-gospel arrangement and cascading choral refrain. It was written back to back with ‘Footprint,’ a seductive whirl of warped fairground pop, which became a kind of nocturnal sister song to ‘Peace.’ ‘Both those songs had a spiritual element to them, and to me that formed a sort of cornerstone to the album,” Martin explains. ‘We’ve had spiritual references on previous records, but I think with this one it’s a little more obvious.’