Michael Jackson's This Is It Film Hits Theatres 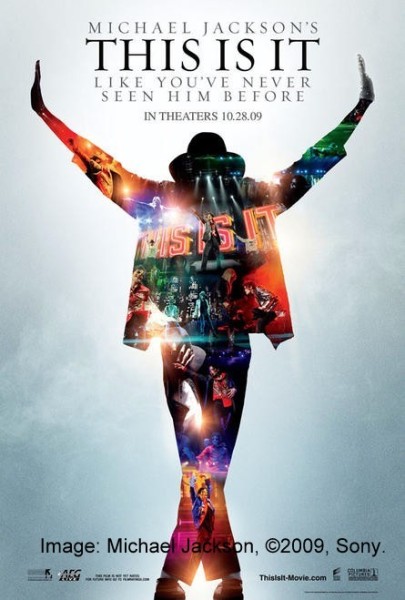 Michael Jackson started in the music business at the age of eleven with his brothers as a member of the Jackson Five. In the early 1980s, he helped defined the art form of music video with such ground-breaking videos as "Billie Jean," "Beat It" and the epic "Thriller." Michael Jackson's sound, style and dance moves inspired generations of artists of all genres.

During his extraordinary career, he sold an estimated 750 million records worldwide, released thirteen number one singles and became one of a handful of artists to be inducted twice into the Rock and Roll Hall of Fame. The Guinness Book of World Records recognized Michael Jackson as the Most Successful Entertainer of All Time and "Thriller" as the Biggest Selling Album of All Time. His long standing guitarist, David Wiliams was recently inducted in the the Guinness Book of World Records as the guitarist who performed on the most number of hits in the world. Michael Jackson won 13 Grammy Awards and received the American Music Award's Artist of the Century Award.

Five of Michael's solo albums, "Off the Wall," "Thriller," "Bad," "Dangerous" and "HIStory," are among the top-sellers of all time. "Thriller" holds the distinction as the largest selling album worldwide in the history of the recording industry with more than 70 million units sold. Singles released from the Thriller album sold more than 100 million copies worldwide, another all time record.

Michael Jackson "This is It" will be released exclusively for a special, limited, two-week engagement worldwide on October 28th. This Is It is being produced with the full support of the Estate of Michael Jackson and will be drawn from hundreds of hours of rehearsal and behind-the-scenes footage, captured in high definition with state of the art digital sound as the late singer was preparing for his concert series in London. The film, which will also offer select sequences in 3-D, will provide a unique career retrospective and feature interviews with some of Michael Jackson's closest friends and collaborators.

Michael Jackson "This is It" will offer fans worldwide a rare, behind-the-scenes look at the performer as he developed, created and rehearsed for his sold-out concerts. Chronicling the months from April through June, 2009, the film is drawn from more than one hundred hours of behind-the-scenes footage, featuring Jackson rehearsing a number of his songs for the show. Audiences will be given a privileged and private look at the singer, dancer, filmmaker, and genius as he creates and perfects his final show.

The film's director, Kenny Ortega, has directed feature films, television, stage, concerts, and massive llve events including The Olympics with equal bravado. The majority of the film's footage was shot in June, 2009 at Staples Center in Los Angeles, California and The Forum in Inglewood, California, as Michael prepared for "This Is It," the series of fifty concerts he planned to present at the O2 Arena in London. Michael Jackson, one of the most widely beloved entertainers and profoundly influential artists of all-time, leaves an indelible imprint on popular music and culture. His legacy shall live on.