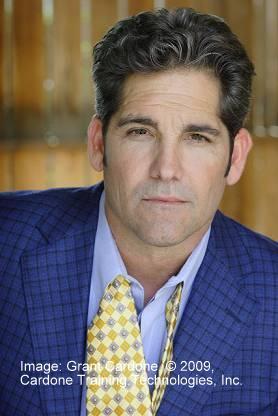 An Exclusive Interview By Bruce Edwin

The Hollywood Sentinel - Bruce Edwin: You created a program I read about called E-pencil.

The Hollywood Sentinel: And you were working prior to this in the automotive industry, is that the main work you were doing before you became an entrepreneur and inventor?

Grant Cardone: No actually what I did was I got out of college, and I didn't want to be an accountant, which is what my degree was in, I was in an environment that had 25 percent unemployment, two and a half times worse than it is today, interest rates for credit cards, or an automobile purchase, or a home was 15 to 18 percent, the economy was ridiculous, terrible. And this was in the late 70's, caused by the oil embargo, and so really the only job I could get at that time was sales. And when I got in to the sales business, at that time out of college, I didn't know any thing about selling, the people around me obviously didn't know any thing about selling. It’s what makes selling such a bad experience for people. People say God, I hate salespeople, and I say, 'Well, you've never met one, how would you know?" And they say, "What do you mean?,' and I tell them, "You hate meeting people that don't know how to sell, because a professional salesperson that knows what they're doing, is never offensive, they never pressure people, they are just polished professionals, and its a great experience."

So I got in to selling, and committed to learning everything I could about it, just like you do in college, you know, where if I'm going to be an accountant, I'm going to learn every thing I can about accounting. If I'm going to be in sales, I'm going to learn every thing I can about selling. And out of that, I made discoveries, and at that time I was in the automobile business, and I made some discoveries about that business that seemed completely backwards to me, the processes took too long; it was antagonistic to a customer. Customers didn't like it, the salespeople didn't like it, the dealers didn't like the results they got actually, they'd just never tell you that, and the customers didn't like the control, and didn't like the lack of information. So I went about writing a program which is called now 'Information Assisted Selling." This is way before the E-Pencil, way before the internet, way before any one was thinking of this information, and we trademarked it 'Information Assisted Selling, 'and started introducing that when I was 28 years old to automobile dealers all around the country, about another way to do things. Now since then, that was greatly, vehemently opposed at the time, I was ridiculed that they would never do that, that was ridiculous, and I was an idiot, all of which indicated to me that I was probably on the right track...

Grant Cardone: And what happened was, Lexus and Saturn picked it up. And this has now become really the way to do business in the automobile business. Some people do it better than others, but entire manufacturers now, I've worked with the top 100 car dealers in the country, I'm talking about mega dealers, public companies, have all adopted this system, this assisted selling approach, and it is now being adopted by other industries; consumers, electronics, furniture stores, the Army is now using this way even (for) recruiting, which is a vital, survival point. The heartbeat of the Army is to recruit, which is to sell. So E-Pencil came as a solution basically to quantifying what I was teaching people. We went in to companies and basically said, look, you need to shorten your process. You need to be friendlier, faster, and easy with information. And I'd hear, "Well Grant, that's great Grant, you can do it because you're a pro. You're perfect, that's what you do every day, you have that perfect thing. Right?" And they'd say, "You know Grant, if you could put that in a bottle, and make sure all my people use it, then you'd have something." And I was like, "Wow man, how do I put things in a bottle?" Well the way to put things in a bottle today is software.

So I basically did for car dealers what consumers hate, which is negotiating prices. How to get information from a car dealer? And we basically built a piece of software that delivers payment, prices, interest rate, and trade figures, in seconds, and it makes sure that every one is working from the same information, that the information is quantifiable, and that the information is recorded, so we know what we actually gave out, what the car dealer gave out. And what happened was immediately, we shortened the sales process. Some sales processes were reduced by a quarter, that is, people were spending 3 or 4 hours to get information that they were now getting in 40 minutes. What happened that we didn't know would, was employee retention increased, which is a major, major cost and problem in car dealerships, and number two, customer satisfaction increased by almost 80 percent. Now the phenomenon with this, employee retention went up, customer satisfaction increased, and, the gross profit for the dealership actually improved, by using technology to generate a proposal, or negotiating part of the sales process.

The Hollywood Sentinel: That's great, that is very smart of you.

Grant Cardone: This goes with what we teach people in my seminars, my programs, and all of my books. They are basically written about problems. I made a comment on a radio show one day in New York, and that is 'the reason people don't have money is they don't solve problems.' And the guy doing the radio show said, 'What are you talking about?' And I said 'Poor people hate problems, and rich people love em.' Poor people hate problems. They avoid problems. They don't want problems. They talk about problems like they're a problem. And, rich people are like, 'problems equal money.' They know if they solve a problem, you get money. Solve a problem and you create a service. And Velcro, Mac computers, I-Pods, automatic transmissions all solve problems.

The Hollywood Sentinel: Yes, that's brilliant. It sounds so simple, but it's genius.

Don't miss part 2 of our exclusive interview with Grant Cardone, continued in the next issue of The Hollywood Sentinel, where Grant discusses with us notions of the New World Order, What actors and models need to do to succeed, and much more.