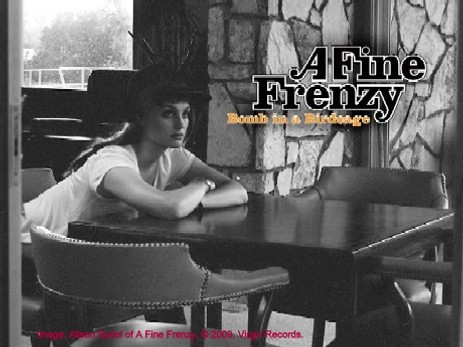 Born in Seattle and raised in Los Angeles, 24-year-old singer and songwriter Alison Sudol began in the entertainment world as a fashion model and actress. She made her acting debut on the crime drama series CSI NY. But it was her music, and her connection to the modern, that helped make her a star. Becoming active on Twitter long before it became a cultural phenomenon, she generated well over one million followers, making her one of the top ten musicians on the service, and becoming one of the many new artists that social media helped make famous. Of course, having a brilliant talent as a singer and songwriter didn't hurt either. Her debut, "One Cell In the Sea," which reached number one on the charts, put her on the musical map around the world thanks to her sultry, romantic ballad "Almost Lover," and a voice and talent that shined well beyond her years. She signed a deal with Virgin Records, and her life would never be the same.

She followed less than two years later with the album "Bomb in a Birdcage," which was a Number One Top Pop Album, #3 on the Top Album iTunes chart, and reached #2 on the Amazon MP3 Best Sellers chart. The Hollywood Sentinel states that the album's first single "Blow Away" is "simply sweet pop brilliance." Vogue described "Blow Away," as "irresistible." The record showed even further growth and development of Alison Sudol, which was extraordinary to begin with.

Wasting no time following up their acclaimed second album the band announced a special treat for the holidays. On November 3, 2009, A Fine Frenzy will be releasing the six-song EP Oh Blue Christmas. Singer Alison Sudol states of the recording sessions, "It was the most wonderful thing. We all holed up in a lovely studio, which was built in the '70's and hasn't changed much since then, and though it was the sticky, hot LA summer outside, inside, it was snowy, delightful Christmastime." For the upcoming, highly anticipated record, the band expanded its sound with horns, mandolins, and pedal-steel guitars. Alison Sudol continues, "We basically put down six songs in five days, recording everything together around an invisible campfire, everyone picking up different instruments and playing them on a moment's notice. There was definitely some holiday magic in the air that week."

The EP hits the world when A Fine Frenzy is in the throes of a nationwide tour. Alison Sudol will take a break from the frenetic tour schedule later this month to do an exclusive interview with The Hollywood Sentinel, which will appear in the first of this publication's two November issues. Don't miss it!