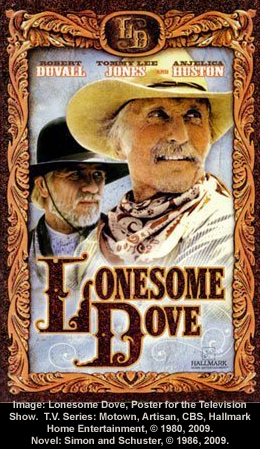 Moira Cue is reading and reviewing, in random order, every Pulitzer Prize winning novel / work of fiction, exclusively for the Hollywood Sentinel.

Allow me full disclosure, I don't like Westerns. I find the all-male, dusty, sparse with flora, gun-toting allegories, be they cinematic or literary, too far from my own experience to relate. Yet, when asked which of the Pulitzer Prize winning novels I liked best, while many excel and compel, Larry McMurty's Lonesome Dove, (winner, 1986) and also a four-part miniseries set in the Wild West during the last days of the buffalo, when settlers still avoided certain trails due to the risk of being scalped, is the story that moved me to skip meals, avoid phone calls, and stay up late until I knew if Gus would save Lorie, and if he would wind up with his old sweetheart Clara.

Captain Augustus McCrae and Captain Woodrow F. Call are ex-Texas rangers who run the cattle ranch at Lonesome Dove, Texas. Most of the cattlehands are in love with Lorie, a young woman who was forced into prostitution by her lover and then abandoned. Lorie works in the local saloon, where the owner is also in love with her. When she falls in love, it is with another young, physically beautiful character, Jake Spoon, who starts out as a Texas Ranger with the Captains but is so used to his life being easy on account of his looks that he slowly drifts, lacking moral resolve, into a band of gamblers and then worse. Gus knows that Lorie will fall for Jake before she does; He is used to Jake's effect on women and knows that Lorie is no better judge of character than any other foolish young woman. But Lorie reminds Gus of the woman he loved when he was a young man, whose name is Clara. Clara rejected Gus's marraige proposals, taking up with the first "stable" opportunity that presented its self, because she felt that Gus's true love was adventure. Gus married, and was widowed, but never forgot Clara.

When Gus sees Lorie he wants to protect her from her own bad decisions and impetuous wrecklessness. But the drive toward a larger adventure seizes hold of Gus and his partner, the reserved, orderly, stern Woodrow Call, usually referred to as Call. Call is the opposite of Gus. Gus likes to ponder, pontificate, and relax. Call keeps his mouth shut and is more comfortable working than anything else. Somehow Call and Gus take hold of the idea of a cattle drive to Montana, to start the first ranch there. If they succeed they will be rich, as the only competitor for a government contract to supply soldiers with beef. Jake Spoon, shows up at Lonesome Dove shortly before the grand adventure, on the lam from an accidental shooting of a dentist, whose brother-in-law, July Johnson, has been reluctantly dispatched to bring him back to justice. Meanwhile, July's wife runs off to find the man she really loves, an associate of Jake's, and July's deputee chases July to tell him that his wife is missing.

The villain of the story is a bloodthirsty criminal, an Indian named Blue Duck. This is not a simplistic cowboys and Indians story where one side is good and one side is evil. There are many whites in the story who are alcoholic, depraved, bigoted, or cowardly. Gus and the other cowboys have more in common, he realizes, with the natives than with the whites who come after men like him have blazed a trail. He prefers to get along with the Indians as he sees how similar they are. But this particular individual, Blue Duck, is a real bad guy. He kills slowly when he has the time, brutally when he is in a hurry. He steals horses. He kidnaps women and sells them into sexual slavery for horses and supplies, then gambles and cheats to win back his "property" and kills any one who argues with him. He's ugly. He's mean. He smells bad and everything about him is sick and cruel, just for the sake of cruelty. At the beginning of the adventure, when Gus has a chance to shoot him in the back, he doesn't; a decision he comes to regret.

The story reminds me of something I find hard to imagine: That before the shopping malls, the railroads, the highways, there was a different kind of law, wide open skies, and wilderness. In this context love and redemption never come easy, if at all. Others have told this American history, but none have made it so vivid, so real, so heartachingly rendered.

© 2009 Moira Cue for The Hollywood Sentinel. All Rights Reserved.