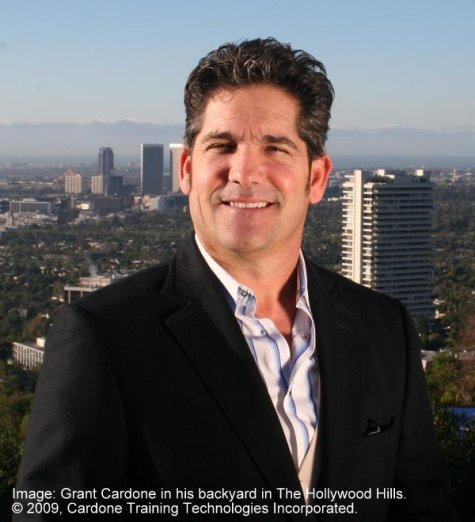 The force of Grant Cardone defines leadership to its core, in its highest, greatest form. His energy is massive, his charm, legendary, and his motivation of positive, successful thinking, matched by few. Starting from modest beginnings, Grant Cardone, who is also an inventor, is now the founder and owner of three multi-million dollar companies, a successful software company, a sales training and consulting business, and a real estate company with a portfolio worth over 100 million dollars.

As if all that were not enough, Grant Cardone is now a successful author, and public speaker, lecturing around the world to industry leaders, managers, CEOs and entrepreneurs, on sales, money, finance, business strategies and business expansion. If you have not yet read our first part of our interview with Grant, go here now first to do so at PART ONE.

Grant Cardone's work has had a profound influence on some of the most successful companies and artists of our time. We are pleased to give you here, Part Two of the exclusive interview with the man that other financial experts are calling ‘The entrepreneur for the 21st Century,’ Mr. Grant Cardone.

The Hollywood Sentinel-Bruce Edwin: It seems to me that the majority of society out there thinks, ‘well, this is how things are, I just have to deal with it and live it, this may be terrible, but, this is how it is.’ You obviously saw a problem, and you saw something that could be improved, and you didn't say, I'm just going to accept this, I'm going to improve how things run, and make it better, and you did, and I feel there are a small percent of people out there in society like that, that actually takes initiative that moves society forward with creation, and invention, and I guess my question to you is, what do you feel makes some one that has the inclination and acts on that impetus, versus some one that just says, ‘well, I'm just going to go with the flow and stay how it is?’ What is the difference between two people like that would you say?

Grant Cardone: You know, I don't know that there is any difference actually, one if there is two people, and there's not, but lets say there are two people, and one is like O.K., I'm gonna go with the flow, and another is like, no, you know, I want things to be better, I think the only difference is, with the second guy who says, no, I want things to be better, maybe he's just like look, I just can't live that other way, you know, and they both work. You know, some people say the other guy is lazy, and no, it takes a lot of work to accept whatever is given to you every day. It takes the same amount of work, maybe even less, but it's more fun, to say, I'm going to change things around me.

And here's the good news, there is more people that don't want to change things, than do. There's less competition, and while people think, oh, they're pushing through it all and there's so much competition, the reality is, when you get to that real place, where there is not that much competition, where there is not that many people willing to do what it takes, and so there is less people at the top, and so there are less players up there, the thinking is freer, the air is better, I mean, there's less traffic there, there's not as much competition,it's not as bogged, every thing goes faster. Are there bigger problems? Yeah, but you want bigger problems.

And so, you know, I like to think that there is not really that much difference between me and some body that doesn't want to do it, because I've been there. Look man, I remember being in a bowling alley, I was 17 years old, playing, me and my brother, every day, for three and four hours a day, playing the game, Asteroids.

The Hollywood Sentinel: Ha Ha, yeah, I used to play that.