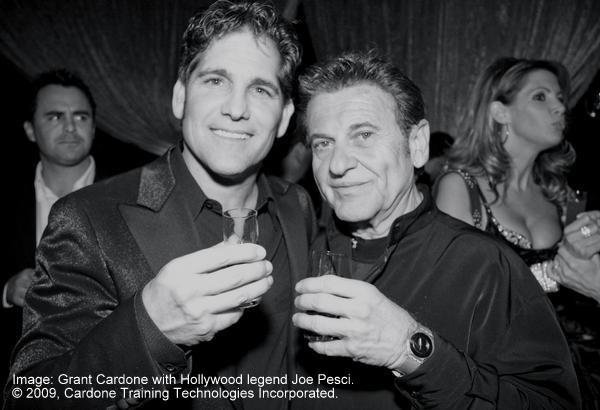 'Your personal willpower is meaningless when you are surrounded by a bunch of people with a combined willpower that exceeds your willpower, and their will is to destroy you, themselves and everyone around them.'-Grant Cardone

Grant Cardone: And so I was hanging around a lot of people and, it was the great will that was winning, so, probably the single biggest shift for me was the book 'Dianetics' by L. Ron Hubbard, and it’s about the mind. That book is not about Scientology. When you say Dianetics, most every body thinks Scientology immediately. That book is Dianetics, the word dianetics is what the mind is doing to the body, and that book literally changed my life. It woke me up, it took me out of a state of unconsciousness.

And that book is not Scientology, a person confuses this and thinks oh, that's Scientology, but its not. Dianetics is a different thing than Scientology is. A person can read that book, you know, I was brought up Catholic, so a person can read that book and still be a Catholic, or a Muslim, or agnostic, or whatever you want to be, Baptist, or Protestant, or Mormon. That book is about your mind, and regardless of whether you're a Mormon, or Muslim, or Catholic, or whatever you believe in, that book is just about how your mind works. And that was the problem I was having in my life. Drugs basically disguised the problems in my mind, and it covered things up, until the drugs wore off, and it was like, oh! problem! And that book really, really woke me up.

Bruce Edwin: Cool. That's something that I like about you and your work, is what you said earlier, and that is when you said, oh, people kept saying I was doing every thing wrong, so I must be doing something right, and with what you said here about Dianetics, because obviously what you are talking about with that book in particular, is obviously criticized negatively, and as you said, misunderstood, and that's not how the majority of the world thinks about some of these things...

Grant Cardone: You have to understand, the majority of the world used to think the world was flat, so every great thing that has ever come along, it doesn't matter whether it was fire, or the automobile, they've all been resisted. Everything. I'm building a condo on the Ocean front right now in La Jolla (California), it's a great thing! It’s much better than what’s there now. I own the property there now, I own twenty units there. We're going to build it, but we're going to get people to resist it. And the only thing they're resisting is a better thing!

People resisted Gandhi, Jesus Christ, you know, entire civilizations have burnt every book that they ever had. You know, the Greek don't even have any thing (much of their own) to read any more, because every thing was burned. So, things are resisted. They killed John Kennedy, Martin Luther King was killed, these weren't bad people, these were great people! They were people that were resisted!

Grant Cardone: See, all the controversy surrounding Scientology actually drew me to it. I figured it must be something interesting if it is getting everyone so jacked up, I will go check it out and discover what the truth is for myself. I like looking at things that are new and that other's either don't understand or just refuse to even consider. The fact is history proves that when masses of people make a decision one way or the other regarding any topic most of the time the masses are wrong. Scientology and Dianetics is a great thing, I know it helps people, it has made my life incredibly rich in every way....and no one should be threatened by it just because it is new. It solves problems, it puts man in a position to be in control of his / her life, and wakes people up so they can discover what is true for them. The biggest secret about Scientology is how many wildly successful business people use it in their businesses to create success.

Bruce Edwin: Wow. Grant, Something great about you is your energy and motivation, which helps enable you to do all these huge things you have done and are doing. Aside from the people around you in life, I'm sure that helps, but is there kind of a ritual that you go through in your life? I mean, what advice would you give people to get and stay motivated?


Don't miss PART THREE of our exclusive interview with Grant in the next issue of The Hollywood Sentinel, out December 1st, 2009. To order Grant's books and cd's, to take your life and career to the next level, contact his office at: 1-800-368-5771.