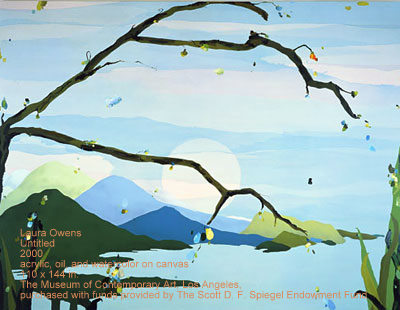 The current exhibition at the MoCA (Museum of Contemporary Art, Los Angeles, in downtown L.A., on Grand Avenue, across the street Northeast of the curvaceous and reflective Walt Disney Concert Hall, perched atop a hill that overlooks the city like a jewel, with a lavender mountain ridge as a backdrop) is titled Collection: MOCA's First Thirty Years. To any one who has frequented the museum even the past half a decade, many of the works are familiar. Traveling southeast to northwest, counterclockwise, through the galleries on the main level, one sees Warhols and Rothkos and Tapies, and a Pollack and a Krasner, that one has seen in recent exhibitions.

The first thing that is different about this collection is the audio tour. Attendees are greeted with a handout that instructs them to call 213-455-2926, then press the number associated with the work. I really like this idea. A whole audio tour with headphones seems like too much of a commitment for our commercial and internet shortened attention spans. I never pick up the headphones for that reason, and, I have to sift through so much I do know to find the few nuggets of information I don't know. With the cell phone tour, I skipped over artists who have oversaturated contemporary art history classes with their justifications and agendas, and only called and pressed the number for the few pieces that either intrigued (such as #12,Gautemalan-born Alfred Jensen, whose colorful abstraction, A Quadrilateral Oriented Vision, looked like kodachrome Braille but referenced the Mayan calendar) or charmed me (Edward Ruscha's Chocolate Room, 1970-2004, which I learned from the audio presentation had originally been presented at the 35th Venice Biennial, and attracted both ants and anti-Vietnam war protesters, who respectively consumed and vandalized the installation. As a bonus, the room gave the impression one had walked into a giant chocolate scratch and sniff sticker).

The sound bites, both textually on the wall, and on the cell, brought the artists' visions to life, as in Rosenquist's "dread of the drip" or Ad Reinhart's tongue-in-cheek "12 Technical Rules" which included "no color" and "no brushwork" beneath a very blue painting. I was delighted as well that nearly one full room was devoted to Franz Kline's signature black and white canvasses with all their arduous mimicry of spontaneous movement. Really that was enough to make the trip worthwhile. But this show doesn't stop. It keeps giving until you realize you just might not be physically or mentally capable of absorbing everything you should without coming back for a second walk-through, with a fresh mind, starting backward and going the opposite direction. Luckily, the show started 11/15/09 and runs all the way to 5/03/10, so I will have time to do just that.

The photography was mixed in with the painting, a curatorial decision which at first created tension but soon seemed natural. The most psychologically disturbing, emotionally wrenching work was the photography. Nan Goldin, Larry Clark, and Diane Arbus shot misfits, freaks, transvestites, heroin junkies, Down's syndrome sufferers, skinheads, parents, triplets, and punks with a candid yet carnival-like immediacy. In many of the paintings you felt the subject was an idea or an object. Either it was an idea about beauty or order or paint its self. With these three photographers, you felt, the idea was to put back into art all that painting had shut out of the door: places you, as a high-minded art patron, don't go and people you, as some one with an education, don't see.

Then there was sculpture: A row of Claes Oldenburg's pieces that looked like giant cookies trying to mimic other real objects, but made out of mashy paper mache. And a strange circle of Yayoi Kusama's silver shoes in the middle of the Nan Goldin room, with what looked like the sprout buds that grow on potatoes, except they were silver, and growing out of silver shoes.

There were the instantly recognizable artist's: Ellsworth Kelly, who has no real imitators. You can always spot one of his shaped and brightly colored thin framed canvases. Sam Francis is another whose signature (bright poured primary colors, often flirting with all the edges of the picture plane) no one has encroached upon. Dan Flavin is another. You see a flourescent light in a museum that's not on the ceiling, and you know it's Dan Flavin.

Almost like themselves; there was one Kenneth Noland whose signature circle inside a circle inside a circle ring of pure color didn't quite look like I'd imagined his work would look after seeing it reprinted and thus scaled down so many times. There was a Donald Judd that seemed too sleek and beyond utilitarian to be a Donald Judd, because the deep blue seemed to invite rather than impose. There was so much op art. Bridget Riley's Green & Magenta Diagonal, 1968, did more than pulsate. The even bands of peppermint stick alternating magenta green magenta/green magenta green candy cane diagonal stripes blurred, buzzed, popped, dilated and striated. It was only with great effort that one could discern that the swatches were of even width and proportion.

For further mind-bending, one only had to look to that screwball cousin of sculpture, installation. A Bruce Nauman maze of corridors led you just around the corner, to a televsion screen, where you could just barely see yourself 15 feet behind where you had just been. Or was it fifteen feet ahead of yourself? A Doug Wheeler room made me feel like I was inside a movie where I had died. The room was full of UV white light emanating from a rounded glass cube mounted on the wall. You had to take your shoes off before entering. Once acclimated to the inside, the world outside seemed garishly yellow.

In closing, with over 500 works of art, this is a show within a show, one you can return to over and over. I urge you to go see for yourself.www.moca.org

© 2009 Moira Cue for The Hollywood Sentinel. All Rights Reserved.