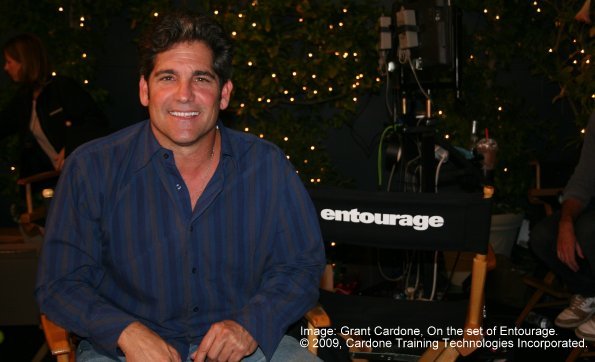 Grant Cardone: You know, and many people today will be like, what's that? You know, it was after Pac Man, today it will be Call of Duty, or you know, just listening to music, or the baby boomers watching CNN all day long, I remember just wasting time, well somebody, you know, my Mom would say, 'Oh, you're so lazy', but you know, the truth is, I wasn't lazy, I was bored, and I wasn't lazy when it came to playing Asteroids, I used a lot of time and energy to play that game, and that could be said about all people, Generation X, they're not lazy, they're just spending all their time doing something that you don't understand yet.

Look at what you're doing Bruce, you know with the entertainment world and all this, these people could be judged by a business man as, oh well, they're not doing any thing. No, they're creating, its just in a different genre. The problem with that whole industry today, radio, music, movies, man that world is changing so fast today, that you have to be on your game if you're an artist, and, there was an artist here in L.A. that picked up my book 'Sell to Survive,' and this guy writes probably 20 percent of all movies made, he probably writes the music for that much, and he said, this is the thing that's been missing in my business, probably more than any other thing, the ability to sell my self, and sell my product, and get my price, and as things get more and more competitive, whether its music, business, housing, mortgages, whatever it is, its all the same, there's creativity in every one of these fields, you know, computers, but whatever it is, you have to move your product, and get your product in to the marketplace, and then sell that in to the product and monetize it.

The Hollywood Sentinel-Bruce Edwin: Do you think there was a time when you learned this on your own, or did you just happen to have family that instilled this in you, or did you just get this yourself?

Grant Cardone: You know, I was 25 years old, and my life sucked, I mean it was terrible, I was renting an apartment that was 400 bucks a month, my dad died when I was 10 years old, I had a brother that I lost when I was 20. Things were not going well for me in life from the ages of 10 to 25, I ended up in drugs, got in drugs when I was 15 or 16 years old, ended up with a drug problem till I was 25, and one day looked around and said, man I can not do this any more. I'm either gonna die, or I'm gonna change...

Grant Cardone: And I made the decision to change, and really, really started at looking at what do I have to do to change my life. And I literally changed every thing, my friends, where I hung out, and I took all the time and energy I spent destroying myself in life, and I turned it in to learning, and how do I get an education. (Learning) what do successful people do? What are happy people doing? You know, why do people get rich and then they're unhappy? You know, I don't want to be those people, there's people going to my church that didn't seem happy, they'd be happy for an hour, and then unhappy for the other seven days, and so I'm like, O.K., that's not what I want, so I'm like O.K., I've got to find the best of all of this. There's not reason not to have money, there's plenty of it on this planet, and there's no reason not to have happiness, there's plenty of that you know?

So, there was something that I was doing, I was causing these problems in my life, and I took responsibility, and I quit blaming every body else. It wasn't even the drugs, it was me. Drugs just happened to be a symptom of another problem.

Bruce Edwin: Really, yeah, that's incredible that you did that, unfortunately many people don't have that willpower to over come all that, or they do, but don't act on it.

Grant Cardone: Your personal willpower is meaningless when you are surrounded by a bunch of people with a combined willpower that exceeds your willpower, and their will is to destroy you, themselves and everyone around them.