Alison Sudol is One Fine Frenzy 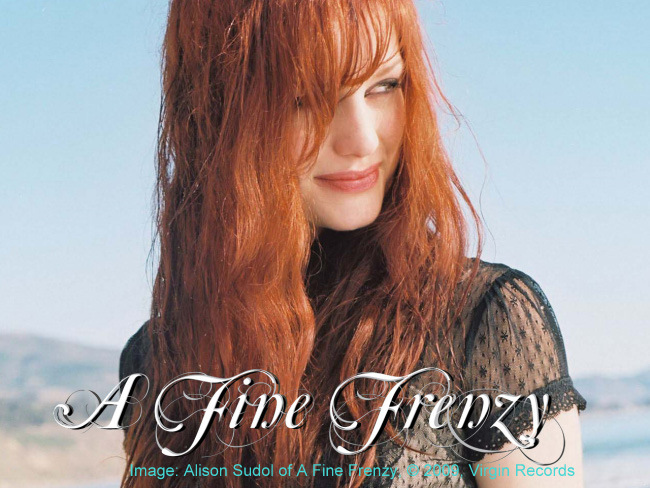 It is on a rare occasion that there emerges in the world of music, a brilliant voice and talent that takes the music world by storm. A sweet, pretty girl with a voice like an angel, and songs just as lovely, named Alison Sudol, otherwise known as A Fine Frenzy, is one such artist.

Born in Seattle and raised in Los Angeles, Alison Sudol began in the entertainment world as a fashion model and actress, before making her acting debut on CSI NY. She then signed a deal with Virgin Records, and her life would never be the same. Her debut, 'One Cell In the Sea,' which reached number one on the charts, put her on the musical map around the world thanks to her sultry, romantic ballad 'Almost Lover,' a brilliant song that signifies a timeless power, and a voice and a talent that shines well beyond her 24 years of age.

After 'One Cell in the Sea,' Alison Sudol later followed with the album 'Bomb in a Birdcage,' which hit Number One Top Pop Album, and hit the top of the digital charts around the world. 'The Hollywood Sentinel' stated that the album's first single "Blow Away" is 'simply sweet pop brilliance.' Vogue described 'Blow Away,' as 'irresistible.' The record showed even further growth and development of Alison Sudol, which was extraordinary to begin with. Wasting no time following up their acclaimed second album, the band announced a special treat for the holidays. On November 3, 2009, A Fine Frenzy released the six-song EP 'Oh Blue Christmas' which like the bands other work, is a must have for any music collection.

Alison Sudol, who is a rare person of great talent and kindness, took a break from her busy tour schedule late last month to do an exclusive interview with The Hollywood Sentinel.

An Exclusive Interview with A Fine Frenzy's Alison Sudol

The Hollywood Sentinel - Bruce Edwin: Hi how are you?!

Alison Sudol: I'm good how are you?

Alison Sudol: Do we really?! That's awesome! Do you like it or hate it?

Bruce Edwin: You know, I always used to get asked, 'oh, you're a Christmas baby, do people try to skip your birthday, or skip your Christmas?' You know, I've never really minded it, how bout' yourself?

Alison Sudol: I don't really mind it either, because I feel like, after Christmas, it's harder, but before Christmas, people are in such a festive mood, that, you know what I mean? I feel that everything is decorated for my, or, you know, for OUR birthday!

Alison Sudol: You know, every body is like, on the light sirah's, and people are having parties, and I love every thing about winter time too, I love cold...

Alison Sudol: Well, yeah I mean it's like, such a great season, I like fall and winter.

Bruce Edwin: Yeah, I agree, it's nice to see the change of the seasons, and it is pretty.

Bruce Edwin: Exactly, I'm originally from Illinois, and then I moved to Chicago where I lived for many years, so I've definitely gone through a lot of that, but I read you lived in Seattle, and then grew up a lot in L.A?

Bruce Edwin: And that was obviously a bit of a change. People are down on L.A. a lot, but I saw one of your You Tube Videos I believe it was, and you were doing kind of a documentary thing, like running around going to cool shops and stuff, was that in L.A. or where was that?

Alison Sudol: Yeah, that was in L.A., like Silver Lake, do you actually live in L.A.?

Bruce Edwin: I do.

Continued on next page