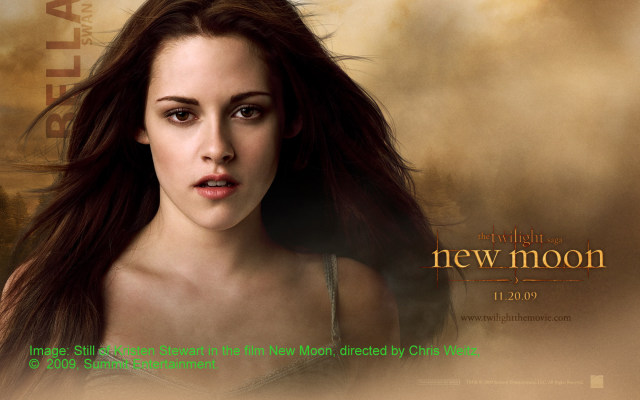 Directed by the brilliant writer / producer Chris Weitz (The Golden Compass, Nick and Norah's Infinite Playlist, American Pie 1 and 2, etc), and written for the screen by the fine talent of Melissa Rosenberg (Dexter, The O.C.), New Moon is the second installment of phenom Stephenie Meyer's massively successful 'Twilight' series books.

The romance between a mortal and a vampire soars to a new level, as Bella Swan, played by the sexy Kristen Stewart, delves deeper into the mysteries of the supernatural world she yearns to become part of, only to find herself in greater peril than ever before. Following Bella's ill-fated 18th birthday party, Edward Cullen, played by the handsome Robert Pattinson (also of Harry Potter fame), and his family abandon the town of Forks, Washington, in an effort to protect her from the dangers inherent in their world. As the heartbroken Bella sleepwalks through her senior year of high school, numb and alone, she discovers Edward's image comes to her whenever she puts herself in jeopardy. Her desire to be with him at any cost leads her to take greater and greater risks.

With the help of her childhood friend Jacob Black, played by Taylor Lautner, Bella refurbishes an old motorbike to carry her on her quest. Bella's frozen heart is gradually warmed by her growing relationship with Jacob, a member of the mysterious Quileute tribe, who has a supernatural secret of his own.

When a chance encounter brings Bella face to face with a former nemesis, only the intervention of a pack of supernaturally large wolves save her from a grisly fate, and the encounter makes it frighteningly clear that Bella is still in grave danger. In a race against the clock, Bella learns the secret of the Quileutes and Edward's true motivation for leaving her. She also faces the prospect of a potentially deadly reunion with her beloved that is a far cry from the one she hoped for.

In New Moon, Bella's best friend, Jacob Black, makes a bid for her heart as well creating an adventurous love triangle for the Forks area teens. With more of the passion, action and suspense that made Twilight a worldwide phenomenon, The Twilight Saga: New Moon, is a spellbinding follow-up to the box office hit, and it rocks the world November 20th, 2009. It was shot in Italy, Canada, and Portland, Oregon.

Author Ms. Meyer will do her only interview of the year this week on Oprah. Many screens around the country will be launching the film one minute past midnight, the night of the the 19th, the earliest second they can legally play the film, which, like the first Twilight, is expected to be a mega blockbuster. The first Twilight film was made for under 40 million, and has grossed world wide over 350 million dollars and counting.

The third installment in the Twilight franchise, Twilight Saga: Eclipse, is already now in post production. In the third film, due out in the summer of 2010, lovestruck teenager Bella must choose between her vampire boyfriend Edward and werewolf Jacob. The third film adds to the cast, lovely star Bryce Dallas Howard (daughter of Ron Howard), and the exceptional talent, Dakota Fanning.