Should Los Angeles Follow in Utah's Footsteps to Help the Homeless? 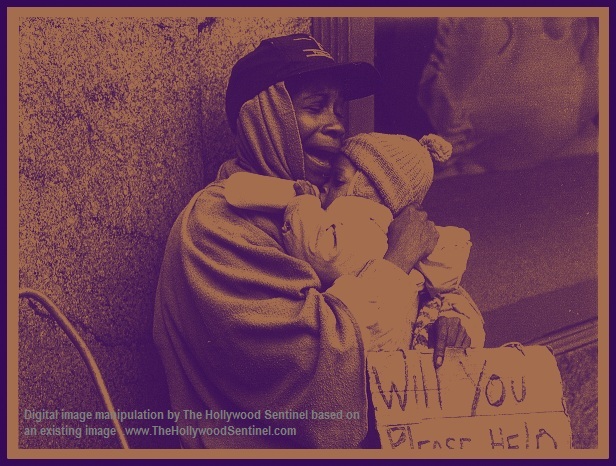 
My partner and I are walking down the sidewalk for an evening stroll. “There he is,” I whisper. “See?” “No, I don’t see a thing.” The lump of blankets and personal belongings on a bench in the shopping plaza is well hidden from prying eyes, yet visible enough to patrolling police to detract thieves and aggressors. My friend and pro bono coaching client, who we will call “Karl,” has chosen “his spot" with care.

Karl is one of the invisible people, the ones who fall through the cracks of society. Unlike the homeless people you see panhandling, Karl has a job, though it’s only a couple of days a week. He tries to be discreet with his backpack, so he won’t look homeless. He doesn’t scream at traffic, get drunk or do drugs. He takes classes at the community college. He even donates some of his income to food for the needy during food drives for the poor at St. John’s, the church where I first met him. When I told him The Hollywood Sentinel would be collecting blankets for the homeless, he asked, without irony, “how can I help?”

Karl became homeless after losing full-time employment due to layoffs when the economy tanked in 2008. He could not afford to properly maintain the paperwork on his motor home, and it was confiscated by police in 2009, shortly after he was terminated. He lacked the social skills and emotional support to handle the situation, and has been sleeping outdoors ever since, saving his money for a new (used) motor home.

Karl’s story, I continue to learn, is deep and complex. Part of what makes life hard for him is not just being African-American, but being tall, strong, and physically imposing. In other words, he is easy to stereotype as a threat to society, even though he is truly kind and gentle. He makes me wonder about the missing stories, the ones of people who die out there, cold and alone, taking their stories with them. In Los Angeles county, the emergency shelters are full to capacity every night. The better programs have wait lists. Being transferred from one city worker to the next, it feels like it would be easier to get into the Vanity Fair Oscar party than get Karl into a program that will provide the short and long term assistance that he needs.

Tens of thousands of people a night sleep outdoors, in tents and makeshift shelters, or sometimes in dirty clothes, on open-air sidewalks, in broad daylight. While Occupy LA members no longer camp out at city hall, the problem isn’t getting better. And in addition to those at risk of death by exposure to the elements, there are tens of thousands more who live in substandard, overcrowded, and vulnerable conditions. This is a human rights issue that is largely accepted as “the way it is.”

Yet, perhaps unbelievably, there is good news to report. The good news is: You a nd I can make a difference and end chronic homelessness in Los Angeles County by following the example of our neighbors to the east, in Utah. Utah's Housing First program takes the simple approach to homelessness. It treats homelessness as a condition and homeless people as people who deserve safe and secure living conditions. It is based on compassion, choice, and human dignity. And if it can work there, it can work here too.

I spoke with Gordon Walker and Nic Dunn at great length to prepare for this story. And I hope you can believe me. Together, we can end chronic homelessness in Los Angeles county. Curren Price, the city council man for the 9th district, has already expressed desire to help. All we need is public support (in other words, YOU). Thank you, dear reader, in advance for your compassion and concern. You can click here to donate money, or send us a message through the contact form on the front page to arrange a drop-off location for items such as blankets, shaving kits, and hand sanitizer.

And for you fiscal conservatives, there is more good news to report: Housing First saves Utah taxpayers an estimated $8,000 per year per homeless person. (Multiply that by the homeless population in LA and you've saved almost enough money to make a big budget action movie.) Good policy doesn't just save money. It makes sense. Together, we can do the right thing.