A new leader of the rapidly growing ranks of female abstract artists in Southern California, the award winning fine artist Guadulesa has become known for abstract or loosely figurative works of art, which reflect spontaneity, strong rhythm, texture, and color blends. The visual artist is a Boston native and former resident of the Piano Factory. After studying, she began her art career in Los Angeles, California, where she began to exhibit her work and painted sets for the theatre, television and the film industry. Exhibitions at Ligoa Duncan Gallery in New York City led to her discovery in Paris in 1981, where she won Le Prix de Peinture du Centenaire de Raymond Duncan at L'Academie des Duncan. (The academy was established by the famous dancer, Isadora Duncan). Guadulesa's work is also included in the Massachusetts collections of the Black Indian Inn, the Harriet Tubman Gallery, and The Cambridge Lawyers Guild. Further of her works are also be found in private collections throughout the United States, including Puerto Rico and St. Croix, as well as Mexico, Israel and Spain.

From 1986 through 2003, Guadulesa was an active member of the arts community in Boston, where she headed arts programming at United South End Settlements. In 1991, she received a Drylongso Award from Community Change, Inc., and in 1992, Guadulesa was the recipient of an Individual Project Grant by the Massachusetts Cultural Council, a state agency funded by the National Endowment for the Arts. She was appointed to the Boston Cultural Council by Mayor Thomas M. Menino and served in that capacity for six years.

Guadulesa participated in interdisciplinary events with musicians, dancers and poets at numerous venues; including Mobius, the Gallery at the Piano Factory, Harriet Tubman Gallery and the Knitting Factory in NYC. In 2002, with a group of local artists, Guadulesa founded the Boston Metropolitan Arts Guild and opened Gallery G. After leading a bi-coastal life for four years, she returned to Los Angeles as a resident in 2003, and Gallery G was incorporated into the Black Indian Inn in Dorchester.

In the summer of 2013, Guadulesa released a painting, "Boston - Survivors' Tribute," dedicated to the survivors and victims of the Boston Marathon. In the fall of 2013, Guadulesa launched her first project on Kickstarter, which successfully received funding. The project, titled Matrix 5; Tones of Resonance, will culminate in an art book published by the painter detailing her journey through the 'healing tones of pure sound' which she used to paint with in this series, as taught by her Native American Cherokee ancestors. Guadulesa's future work includes a Los Angeles gallery show, and further cultural involvement in the arts, with a strong emphasis on teaching youth how to turn their energy into art for creative and positive projects that elevate the culture they live in. 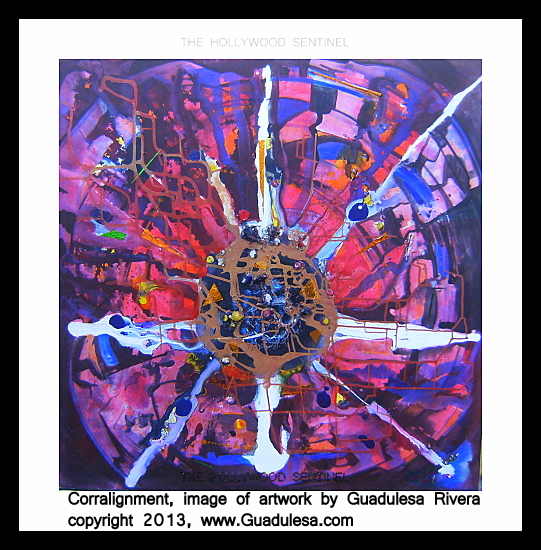 Hollywood Sentinel: How did you get started as an artist?

Guadulesa Rivera: I've been drawn to the arts all my life. I studied drawing, painting and dance, when I was young. My father was a jazz musician and played alto sax. Through my family I became a jazz aficionado. We always had music in the home, and there were other visual artists and musicians in the family. As an adult, I settled into paint as my preferred method for expression.

Hollywood Sentinel: What is your training and background as an artist?

Guadulesa Rivera: I studied formally in my early years, earning an Associate Degree in Studio Arts. There were older artists who helped to shape my path including Kanemitsu, Betye Saar, and Paul Jenkins. I began to exhibit my work and at the same time, I was drawn to work as a Scenic Artist. I painted sets for theatre, T.V, and film. Later, I coordinated the arts and cultural programming for a community-based organization in Boston. I taught at times, but managing and infusing the arts into programming for all ages kept me very busy. I ran a gallery and historic art centre for children. All of these opportunities have shaped my career as an artist.

Hollywood Sentinel: Who are some of your favorite famous fine artists and why?

Guadulesa Rivera: I am drawn to the abstract expressionists. I like freedom of expression in art, because I am an emotional being. Franz Kline is one of my favorites, because he achieved a sense of space and structure. There is a balance between the emotional, intellectual and spiritual energies.

Hollywood Sentinel: Does one need to know color theory and perspective in order to be a great artist? Why or why not?

Guadulesa Rivera: In order to be a great artist, one has to approach the craft with every serious intention of presenting the best work possible. Studying the technical aspects of one's craft is essential to developing a fluid language for the expression of ideas and feelings.

Guadulesa Rivera: Essentially the value of art represents the time and materials that go into creating and developing a work of quality, as well as the artist's experience and reputation. In other words, the public's perception of the artist may increase the market value of the work.

Hollywood Sentinel: Why do so many artists have such great trouble with coping with the difficulties in life they may face, and how can they overcome this?

Guadulesa Rivera: In order to produce art that truly comes from the soul, the artist must be willing to delve into the inner self and open that up to the public. This does not happen easily, nor frivolously. The intensity that leads to great works of art inspires us all, but it can leave the creative artist drained. When life's normal challenges and struggles add to the emotional drain, it can be overwhelming. I suggest a balanced life including fresh air, time with friends and family, and other diversions. I know some artists feel that their angst is what helps them to achieve their stronger pieces, but a balanced individual usually produces a more balanced body of art. Our work usually reflects the state of being.

Hollywood Sentinel: Can art ever be 'wrong?' Why or why not?

Guadulesa Rivera: Fine art is an expression of self. I would consider personal art, not commercial art, wrong only if it did not truly reflect the artist. Many artists experiment with different mediums and styles, as they expand their artistic language. So I am not saying that is wrong. What I mean is that a work of art should touch the soul, from the artist to the viewer. That relationship is very subjective, so the artist must be in control.

Hollywood Sentinel: What do you consider the most important art movement, and why?

Guadulesa Rivera: For me, I greatly admire the early 20th century, when artists dared to bring a new approach to the work. That opened up new avenues and a greater appreciation of some of the older ethnic cultures that contributed to the expression of human life.

Hollywood Sentinel: What responsibility does the artist have to society?

Guadulesa Rivera: As any human on the planet, the artist has a responsibility to grow and mature as a person and member of the society. The artist is in a special position, however, because we are expected to reflect various aspects of the society with insightful commentary.

Hollywood Sentinel: What responsibility does society have to the artist?

Guadulesa Rivera: Society should value creativity in all its forms. The creative mind of the artist encourages others to search for creative answers to their own lives and to value ideas and imagination. Society needs to value the cultural mirror that the artist presents. There are many artists among us.

For more information on Guadulesa, and to see more of her work, visit: www.guadulesa.com.

This content is ©2014, The Hollywood Sentinel, all world rights reserved.