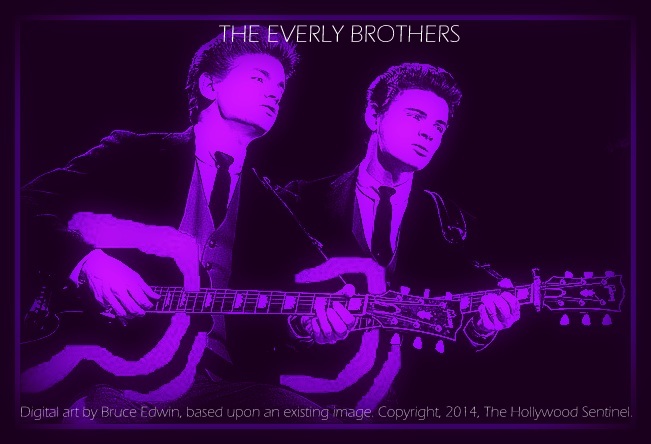 One of the most groundbreaking, talented, and important bands in the world of music; The Everly Brothers, have lost their half. The great Phil Everly of the Everly Brothers has passed on, which is one of the saddest days for music, leaving a great musical loss to the world with his parting. Phil was born in Chicago, and spent his last days in Burbank, California. He was 74. The other half of the iconic band; Don Everly carries on. When I first heard The Everly Brothers, I was probably an infant. The first time that I can remember hearing The Everly Brothers, I was 8 years old, and music was already starting to have a profound effect on me. I would sit spellbound for hours on the shag carpeting of our living room floor, in front of the stereo, playing my Dad's records and 8-tracks. The Everly Brothers were one of my favorite groups, and I knew all of their songs by heart, playing them over and over again.

The sound of The Everly Brothers was out of this world. Their voices together were magical. No one sounded like them before or since. The timbre of their voices together, and their unique approach lyrically and on their guitars gave them a varied range of dynamic cadences and warmth that ranged from soothing and healing, to romantic, daring, and exciting. The Everly Brothers merged the down home roots of country and bluegrass music with the somber vocal keys of blues, along with the rebellious nature of rock, and the energy of pop, into a sound that had never before been heard on the planet. Their voices were captivating, their sound spellbinding, and their musicianship-among the best ever heard. Singing songs of love, crushes, romance, break-ups, and devotion, The Everly Brothers tenderly and genuinely delivered genius works of music that influenced the greatest, and stood the test of time. Paul McCartney stated that The Everly Brothers were the greatest influence on he and John Lennon, and helped to shape the early sound of The Beatles. With many of their songs written by others, a number of their great hits they wrote themselves including; 'Till I Kissed You' written by Don, 'When Will I Be Loved' written by Phil, and 'Cathy's Clown' written by both Phil and Don among more. As one of the creators of modern rock and roll, the brilliance and legacy of The Everly Brothers will forever influence music for all time. We pay fond respect to Don and the loved ones of Phil Everly. Their sound shall forever carry on.

This story is ©2014, The Hollywood Sentinel, all world rights reserved.