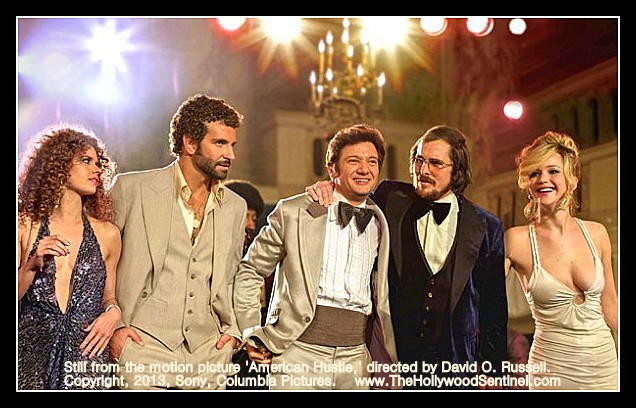 Academy members from each of the branches vote to determine the nominees in their respective categories – actors nominate actors, film editors nominate film editors, etc. In the Animated Feature Film and Foreign Language Film categories, nominees are selected by a vote of multi-branch screening committees. All voting members are eligible to select the Best Picture nominees.

Official screenings of all motion pictures with one or more nominations will begin for members on Saturday, January 25, at the Academy's Samuel Goldwyn Theater. Screenings also will be held at the Academy’s Linwood Dunn Theater in Hollywood and in London, New York and the San Francisco Bay Area. Active members of the Academy are eligible to vote for the winners in all categories.


Nominations for the 86th Annual Oscars

“The Wolf of Wall Street” Screenplay by Terence Winter

Achievement in music written for motion pictures (Original song)
“Happy” from “Despicable Me 2,” Music and Lyric by Pharrell Williams
“Let It Go” from “Frozen,” Music and Lyric by Kristen Anderson-Lopez and Robert Lopez
“The Moon Song” from “Her,” Music by Karen O; Lyric by Karen O and Spike Jonze “Ordinary Love” from “Mandela: Long Walk to Freedom,” Music by Paul Hewson, Dave Evans, Adam Clayton and Larry Mullen; Lyric by Paul Hewson


Academy Rescinds Original Song Nomination For "Alone Yet Not Alone"

So, 'Alone Yet Not Alone' is alone after all. On Tuesday night, January 28th, 2014, the Academy’s Board of Governors voted to rescind the Original Song nomination for “Alone Yet Not Alone,” music by Bruce Broughton and lyric by Dennis Spiegel. The decision was prompted by the discovery that Broughton, a former Governor and current Music Branch executive committee member, had e-mailed members of the branch to make them aware of his submission during the nominations voting period. Academy President Cheryl Boone Isaacs stated of the matter, "No matter how well-intentioned the communication, using one’s position as a former governor and current executive committee member to personally promote one’s own Oscar submission creates the appearance of an unfair advantage.”

The Board of The Academy determined that Broughton’s actions were inconsistent with the Academy’s promotional regulations, which provide, among other terms, that “it is the Academy's goal to ensure that the Awards competition is conducted in a fair and ethical manner. If any campaign activity is determined by the Board of Governors to work in opposition to that goal, whether or not anticipated by these regulations, the Board of Governors may take any corrective actions or assess any penalties that in its discretion it deems necessary to protect the reputation and integrity of the awards process.” An additional nominee in the Original Song category will not be named.

The members from each of the Academy’s branches vote to determine the nominees in their respective categories – actors nominate actors, film editors nominate film editors, musicians and composers nominate song and score. During the nominations process, all 240 voting members of the Music Branch received a Reminder List of works submitted in the Original Song category and a DVD copy of the song clips with film and song title only (additional information including composer and lyricist is not provided). Members were asked to watch the clips and then vote in the order of their preference for not more than five nominees in the category. A maximum of two songs may be nominated from any one film.

Academy Awards® for outstanding film achievements of 2013 will be presented on Oscar® Sunday, March 2, 2014, at the Dolby Theatre® at Hollywood & Highland Center® and televised live on the ABC Television Network. The Oscars, produced by Craig Zadan and Neil Meron, also will be televised live in more than 225 countries and territories worldwide.

The following is a message from The Academy of Motion Picture Arts and Sciences;

The Academy is deeply saddened by the passing of our beloved former president Tom Sherak. Mr. Sherak joined the Executives Branch of the Academy in 1983. He served three terms on the Board of Governors, from August 2003 through July 2012, the last three as President. He was most recently named Los Angeles film czar by Mayor Eric Garcetti to support local film production and serve as a liaison between state lawmakers and the entertainment industry.

Mr. Sherak’s remarkable five-decade career has seen him at the pinnacle of motion picture marketing, distribution and production at companies including Revolution Studios, 20th Century Fox and Paramount Pictures. He was founder and chairman of the MS Hope Foundation, an organization dedicated to supporting the needs of the Multiple Sclerosis community. His passion and tireless energy impacted the Academy in countless ways – especially his support of our new Academy Museum of Motion Pictures.

Ms. Cheryl Boone Isaacs, Academy President states, "In the more than 30 years I’ve known Tom, his passionate support of and excitement about the motion picture business, the Academy, his family and friends never wavered. He was truly larger than life, and he will be missed.” Ms. Dawn Hudson, Academy CEO states, “He was my mentor and my friend. I learned from him, I laughed with him, and I couldn’t be more grateful for the time we shared together. He had a huge influence on the direction of our Academy and on me personally. I will miss laughing with him most of all.”

The following is a statement from the Sherak family. “To the entertainment community, With broken hearts we want to share with you the news that Tom Sherak passed away today (...) at home surrounded by his family giving him hugs, kisses, and love. Tom is, was, and always will be, our loving husband, daddy, papa, brother, friend, and 'Go to Guy.' He blessed this Earth for sixty eight incredible years, and he will be missed every single day. Tom lived his life as an open book. He opened his heart and let the world in, and anyone who was lucky enough to know him knew first hand the power of his love. He gave everything he had to help others, regardless of whether or not he knew them. Tom is a true hero in our lives who has a star on the sidewalk and wings to fly. We love him so very much.” The Hollywood Sentinel extends its condolences to the family and loved ones of Mr. Sherak.

Richard Shepherd headed production at MGM and Warner Bros, and worked as an agent at MCA and CMA, which later became ICM. He founded the Artists Agency, where he represented many stars including Marilyn Monroe among more. He produced the legendary cult film 'The Hunger,' with music by Bauhaus. Aside from all of these massive credentials among more, his even biggest credit still was producing one of the greatest films of all time, 'Breakfast at Tiffany's.' Mr. Shepherd was an industry great who will be remembered.

This content is ©2014, AMPAS, and The Hollywood Sentinel, all world rights reserved, with kind courtesy of The Academy of Motion Picture Arts and Sciences.