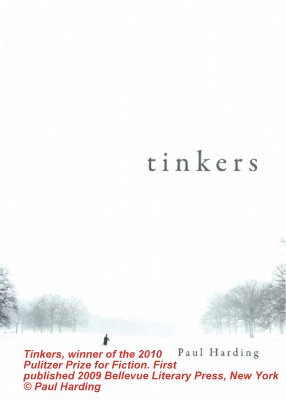 Paul Harding’s Tinkers, the winner of the 2010 Pulitzer Prize for fiction, is a father-son story that re-examines the son’s grappling with his father’s, and ultimately his own, life story and mortality. The story revisits themes already awarded multiple Pulitzers; 1938’s winning novel, John P. Marquand’s, The Late George Apley, is about a son who asks his father’s friend to write his late father’s biography. The 1962 winner, Edwin O’ Connor’s The Edge of Sadness, is, like the 1958 winner, James Agee’s A Death in the Family, essentially a meditation on death and dying with an emphasis on the family organization. In William Faulkner’s winning book, The Reivers, (1963) a grandfather reminisces about childhood while his grandson listens. In Wallace Stegner’s, Angel of Repose (winner, 1972), a 58-year-old amputee moves into his grandparent’s old home to write a biography of his grandmother. 1973’s The Optimist’s Daughter (Eudora Welty) details the immediate aftermath of a father’s death as it affects his daughter.

All of these novels belong to a different class of novel; they at times mimic the “I remember this, I remember that,” patois of memoir; they are short on action, unless it remembered in the form of the long-distant past, and they rely on technically well-crafted writing; an arty ear for rhythm, allusion, and expository comment, that resonates with the lingering vibration of a form of ecstatic trance. I would also put Carol Shields’ (1993) The Stone Diaries, a story about an old woman looking back, into this category of restrained and reflective Pulitzer winning novels. The Mambo Kings Sing Songs of Love, on the other hand (Oscar Hijuelos, 1990) is a story about an old man looking back, but the memories have so much action that you get more of a sense of traveling forward in time, very fast, but not really being in the present where he is an old man, until the end. Many of the winning stories are strong because they create vivid characters, and some have highly dynamic plots that keep readers on the edge of their seat. One must bring maturity, I think, to appreciate a writer who uses linguistic and philosophical chiaroscuro rather than big splashy plots (which are a big draw for me too, but in a different way).

Tinkers is like a spider web; delicate yet solidly engineered, perfect, and yet, something you need to adjust your frame of reference in order not to miss. Reportedly the book was rejected by 20 publishers and picked up by Erika Goldman at a very small press with a small budget. When the announcement of Tinkers as the 2010 winner was made, I logged on Amazon.com within hours to buy a copy of Tinkers, and I had to wait weeks before the order was filled so that the book could be reprinted. Every copy had sold out.

Tinkers is the story of a dying man, George Washington Crosby, as he remembers his father, Howard, an epileptic who abandoned the family. The reason Howard left was that George’s mother, Kathleen, betrayed his father, and it was a necessary act of self-preservation to flee from the consequence of Kathleen’s hard-hearted decision. Paul Harding, who received his MFA from the world famous, highly esteemed Iowa Writers’ Workshop, takes us through the last week of George’s life, as he floats in and out of consciousness, in a sea of memories, most of which address his father, and some of which take an omniscient view of his father’s father, who lost his wits and was institutionalized, traumatizing young Howard whose seizures started not long after the loss of his own father.

Later in life, in retirement, George becomes a fixer of antique clocks. The clocks are present in the room as he lies in his sickbed, surrounded by his loving wife, his children, and grandchildren. His meticulous attention to the clocks is like a wish to go back to the moment before his father left, if not to heal what time has wrought, then to heal time itself.

When an unknown writer, despite being rejected twenty times for publication, suddenly wins the Pulitzer, it is an exciting event for the literary world. Everybody loves an underdog, and that is reason enough to want to read Tinkers. If you need a few more reasons; because the characters have a genuine emotional bond, because the language is crafted by some one with an affinity for the peculiarity or preciseness of a word, and because, like other Pulitzer winning novels on the subject of death, the writer offers many layers and points of entry to interpret the story in accordance with one’s own views on life after death and the so-called afterlife.