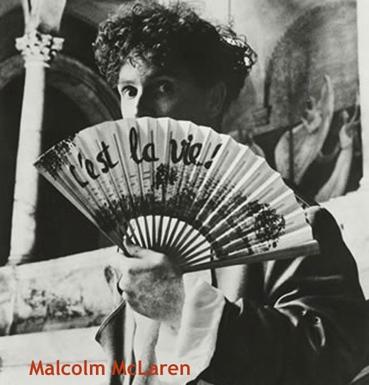 The undisputed godfather of punk, Malcolm McLaren died Thursday, April 8th, 2010. He was 64. The cause of his death was by a form of cancer caused usually by asbestos exposure. Having been sick for over 6 months, he died in a hospital in Switzerland, though lived in New York and London. His life partner, Korean American Young Kim, and his son, Joe Corre, were at his side.

Malcolm McLaren did not tell the press of his illness. In February, he flew to New York for a book release before returning to Switzerland for further treatment. Malcolm’s partner Ms Kim told the newspaper The Independent: "We were there with him when he passed away. He was diagnosed with cancer in October. He was very active until the end of February when his tumor became very aggressive. He just went very quickly. He said he wanted to be buried at Highgate cemetery. We are now taking steps to try to make that happen."

Malcolm achieved early in his life; ticking off as many people as he could with a snotty, dirty kind or rock and roll drenched in anarchy, sweat, and mucked up fashion, that all smeared together was called punk rock. The name itself which used to be an insult called to working class British youth.

Malcolm McLaren famously quoted what his grandmother once told him, she said, “To be bad is good; to be good is simply boring.” With that ethos, the stage was set for a young Malcolm to grow up and lead an underground social movement of misfits known as punk rock. The art provocateur Malcolm reveled in art school in London during the early days of punk before he got twice kicked out, ditching working for the man by joining wild child Vivienne Westwood in the formation of their store Let It Rock, and later changing its name to Sex, the name for an anti-fashion, S&M styled shop that catered to kids including Joey Ramone, Billy (not yet then) Idol, and the pack that would go on to be Sid Vicious and Johnny Rotten- the Sex Pistols.

Dame Vivienne Westwood, his former partner, stated, “Malcolm McLaren was a very charismatic, special and talented person. When we were young (…) I fell in love with Malcolm, I thought he was beautiful and I still do.” Subnormal Magazine, renown as a global punk zine in the early 90’s states, “The 60’s had Warhol, the 70’s had McLaren, and we all have the Sex Pistols. Malcolm McLaren was pure genius. His influence on the punk scene- and consequently, on youth culture from the 70’s up till now and beyond- was massive. It may take an atomic bomb and another revolution for his shoes to be filled again.”

Supposedly knowing more at the time about creating shocking art and causing a riot then business - as a creator in the so-called Situationist art scene that strove for provocation on the streets- Malcolm McLaren decided to start managing the bands, applying his anarchistic aesthetic to a mainstream rock and roll scene that had become safe and hum drum. He and Vivienne were already giving the punks their look; safety pins, trousers with the crotch ripped out, leather, spikes, studs, chains, padlocks, handcuffs, and of course, anarchy symbols used heavily by comrades like Emma Goldman back in the mid to late 1800’s.

And so as a band manager and press agent guru, he brought to the surface of the heap of the music industry, first the New York Dolls, and then a band called The Sex Pistols that he helped name after the store. Later on would he bring boiling to the top the band Generation X, led by heart throb Billy Idol, the former which became the unwarranted name for a bunch of rebel youth, and later Adam and the Ants whose cross dressing, make up wearing ways paved the way for Boy George and the Culture Club, who was an Adam Ant fan. Malcolm last most notably brought us the female new wave band Bow Wow Wow.

Malcolm created music himself, delving in to experimental, spoken word with jazz, trip hop, and even opera. He helped popularize the merging of styles and cultures through music including rock, Caribbean rhythm, reggae, and hip hop. He wrote, painted, published, documented, and made the hippest scenes in many numbers of decades. He made obscure films in the style of dada and pop art. In the end, he even hooked up with Hollywood icons Quentin Tarantino to help score Kill Bill, and others, made some T.V. appearances, produced some films, and furthered his legend.

But Malcolm McLaren’s greatest mark on the world was The Sex Pistols, which, with the over the top menace of Sid Vicious and Johnny Rotten, rounded out Steve Jones, Paul Cook, and earlier before Sid, Glen Matlock. Most know the story by now; Sid’s girlfriend was a groupie. Nancy Spungen was also a junkie, and so was Sid two years before meeting her of his own account. Both were on a downward spiral. Sid signed a paper stating he stabbed her but did not mean to kill her – she died. A few others around at that time stated a drug buy had occurred the same night and that Sid was out cold while Nancy tried to fight off the drug dealers who tried to make off with their cash and the drugs. Sid tried to kill himself a w ek or so later, ended up in a psych ward, and four months later, overdosed fatally on heroin given to him by his own mother. The Sex Pistols were dead – for now. Johnny Rotten aka John Lydon notoriously hated Malcolm McLaren due to business matters and other reasons, and as a result, the global punk scene, identifying with the voice of the Sex Pistols, rather than their manager, mostly hated Malcolm too. Few however could deny his importance, and Rotten, after winning full rights to the name along with the band back from McLaren, finally cashed in more on his own.

On the day that Malcolm McLaren died, the voice that he brought to terrorize the world with “Anarchy in the U.K,” Johnny Rotten, finally buried the hatchet. Johnny Rotten stated, “Malcolm McLaren RIP. For me Malc was always entertaining, and I hope you remember that. Above all else he was an entertainer and I will miss him, and so should you."

Check out the coverage on the Sex Pistols from one of our back issues here as follows: SeX PisTOLs

This page and article only is anti-copyright, 2010, Subnormal Magazine. Reprints or re-posts must be in full, unedited, and link back to this site. Punk’s not dead.