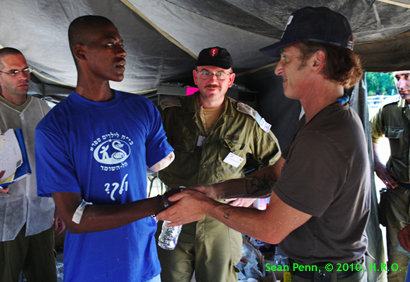 One of the finest actors of our time, Sean Penn is also a humanitarian and human rights activist which is something to be proud of on all accounts. He stars next in the political thriller Fair Game (2010) with Naomi Watts, which premiered May 20th at the Cannes Film Festival in France. He missed promoting the film at the festival, to instead attend a Senate hearing in which he has been asked to testify concerning the condition of Haiti, of which he has been actively donating his time, money, and labor to assist lives there since the devastating earthquake there this year. He tells us here about his work in this regard, and why so much more is needed.

Q. How long have you been over there in Haiti Sean?

A. SEAN PENN: I've been here almost two weeks. We have spontaneously formed an NGO (non government organization) called the (Penn) Haitian Relief Organization. The idea was to (just) bring seven doctors down. We have a total of 30 people, relief workers. And then after three days in an abandoned house, we were able to get our doctors working. We saw helicopters overhead landing nearby, and explored the area and found out it was where the 82nd Airborne had their base at Petionville camp, where there's about 60,000 people in a displacement camp there. And so they were gracious enough to let us camp on the perimeter of their base and then to contribute incredible encouragement and assets. So we were able to get to where we had as many as 30 doctors at a time and we do tailgate strikes with the military in the morning. We take them over to the DMACC clinic and now have a full hospital functioning at the camp. All of this with the support of Lieutenant Colonel Foster. And so we're just treating patients. We've done three food distributions and building every day in a situation that needs a lot more building…

Q. What is the biggest challenge now in Haiti?

A. SEAN PENN: The rain. When the rain comes, it's going to be a public health disaster. That could easily be on the scale of the earthquake itself. Disease is spreading already, tuberculosis, typhoid, tetanus, malaria. This place, you know, which already had incredible hygiene problems within the neighborhoods, now with the earthquake, this is a new disaster waiting to happen.

Q. Do you think this issue, Haiti is fading from the American view as compared to when it first happened?

A. SEAN PENN: It can't fade. Americans are an utter failure if it fades. And America won't be a failure. I've seen this military and I know the military won't be able to stay here for an endless period of time, but if the military can have the kind of human conscience it has had with a humanitarian disaster, the people and the media have to stay interested. And if we don't, we have failed the governments of the world, rather than the other way around. It's time to show the governments that we can do it, because no government can handle this by itself. (…) I was at Katrina. And Katrina, you know, so many people said it's not what you saw on television. It was a horrible thing that happened there. So many people lost so much. But you really could see it on television. This is something like nobody I've talked to has ever seen before. This is an apocalyptic city, and these are some of the most resilient souls in the entire planet and for them to be challenged like this is for us to help them.

Q. Its very generous of you to do so much here…

A. SEAN PENN: Well, you know, everyone contributes in the way that they can. In my case, you know, I'm in a very fortunate position to be able to afford the ticket. Then when I did that with Katrina, I met some people who had some more experience than I did in disaster relief issues, and those were the few people that I called originally. And by that time I had had some experience and certainly given a lot of thought to a lot of it and talked to a lot of people about it and learned what I thought would be a valuable thing to bring. And then you just come in and you find that there's obviously new challenges and new disasters. But what happened was I called those couple of people.

(…) So the next thing, four people turned into 30 on an airplane full of supplies and doctors, and that 30 people has turned into many more. And on top of that, the treatments of tens of thousands of patients that we've encountered, (…) we had transports going all through the night. Again, the food distributions that we do sometimes on our own, sometimes with the military when it's a larger amount of people (are important). But there's an endless amount of contribution that people can make on all levels. And number one, and really the challenge is on the people that do what you do (in the media). I think that, you know, after a period of shame in the media and the news coverage that allowed a war to happen that shouldn't have happened, I think that now it's time that there can't be the question anymore about whether this is going to fade or not. It's up to the media to not let it fade. It can't fade. These are our neighbors, and these are strong great people who have been through too much for too long. We cannot let it happen.