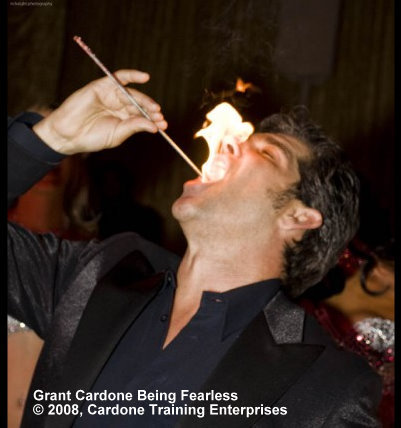 The force of Grant Cardone defines leadership to its core, in its highest, greatest form. His energy is massive, his charm, legendary, and his motivation of positive, successful thinking, matched by few I have ever known. Starting from modest beginnings, Grant Cardone is now the founder and owner of three multi-million dollar companies, a successful software company, a sales training and consulting business, and a real estate company. As if all that were not enough, he is now a successful author with a book on track to be a N.Y. Times Best Seller, an international speaker, lecturing around the world to industry leaders, managers, C.E.O.s and entrepreneurs, on sales, money, finance, business strategies and business expansion.

After graduating from college with an accounting degree, Grant Cardone held several sales jobs, including in the auto industry, where he saw opportunity and rewrote the way auto dealers would sell cars with his Information Assisted Selling programs. These programs have since been customized for businesses to expand outside of the auto industry. He then went on with an innovative Epencil™ software-negotiating program he created to make their businesses more successful, by reducing the time in the negotiation process, and improving customer satisfaction.

As a real estate investor, Mr. Cardone started with one home and parlayed it into apartments, shopping centers and development opportunities with over $200 million dollars bought and sold. His own home in which he currently resides in Los Angeles, along with his wife, the beautiful and talented actress Elena Lyons, is a 17 million dollar mansion in the Hollywood Hills, once owned by Lionel Ritchie. He is the author of numerous books, including the legendary 'Sell to Survive,' which stresses the importance of selling for any career. ‘Sell To Survive’ has become a survival manual for business executives, sales representatives, entrepreneurs, and small business owners. It is the definitive book on how to survive in any economy. His most recent book, to be released on June 1st, 2010, is on track to hit the N.Y. Times Best Sellers List.

With his solution oriented, no nonsense formulas, he has led thousands of individuals to succeed where before they had failed. With his proven business acumen, approachable persona, and growing list of financial achievements, Mr. Cardone has established himself as one of the leading opinion makers on finance and economic issues in the world. He is featured regularly on network news channels and sites reaching millions. His humor, wit, charm, and power of success, truly make him a leader of our time, to help bring the world out of its self- inflicted despair, to a place of hope, vision, and victory. Grant Cardone will be a guest with the legendary Joan Rivers on June 9th, 2010.

We are pleased to give you here, part 5 of our exclusive interview with the man that other financial experts are calling ‘The entrepreneur for the 21st Century,’ Mr. Grant Cardone, as he speaks directly to our readers in the entertainment industry. To see the first parts of our interview, visit here:

Bruce Edwin: (…) Grant, what would be your advice for actors and models and musicians to increase their market and revenue?

Grant Cardone: Artists must embrace the sales and marketing sides of their business. It’s impossible for me to get away from the idea that somebody has to learn how to sell themselves, look at Julia Roberts, what was the one she did, Pretty Woman, right?...

Bruce Edwin: Right, a great one, a huge film.

Grant Cardone: Right, was she the number one pick for that movie?

Bruce Edwin: No, I don’t think so, they didn’t initially want her…

Grant Cardone: No, I don’t think so. What was her first one? Mystic Pizza, her first film, she covered her hair with shoe polish, to make it darker, and showed up, crashed an audition, that she was already late for, and made herself known, stood out, even broke the social protocol and sold herself, that’s not acting, that is full blown hard selling! Had it not worked, they would have said she was obnoxious and an idiot, but it did work and now they call her a star!

This is a big problem for lots of artists, the unwillingness to sell themselves, promote and market. In any contracting and highly competitive industry you are required sell your products, in this case yourself! Take Van Gogh- a great artist who created over 400 original masterpieces in his lifetime, yet, he never collected more than four hundred bucks in sales! In total, he only ever sold one painting, he?sold it a nephew, or to a friend of a family member. Here was a brilliant artist that will be remembered and known forever, but refused to embrace how to sell and market himself while alive.

You know the thing is, artists think, you know, well, “Artists have to suffer.” That’s completely ridiculous. That’s so ridiculous! It’s like what are you thinking man, you have to suffer?! “Oh, well, I’ll really be known when I’m dead.” Well, maybe, maybe not! You know, so the reality is, why be known when you’re dead when you can be known right now? This is not a task the artist should turn over to the manager or PR firm but take responsibility for themselves.

Grant Cardone: I mean, look at Robert De Niro, it doesn’t look like he’s suffering to me. So did he get a break? Yeah, I’m sure he did, but I’m sure there’s plenty to that story that you don’t know, which is that ‘he showed up.’ He showed up and pitched himself when nobody knew him. He sold himself and probably had to do so over and over. The thing about Hollywood is, when you push through and make it, you get this sticky thing going, where people want you over and over again as long as you stay in demand through continued appearances. I talk about this in my new book, ‘If You're Not First, You're Last.’ It’s about how to be first in people's minds.

I don't know anyone that has made it that didn't have to do some things they didn't like, even things they hate, man. Do things you hate to do and that you know others don't like to do and you get an immediate advantage. People hate the word selling. You can see it on their face! They’ll say, “Oh, I hate that idea, I’m not a salesperson,” well you know what? You need to be! Because the people that did and are making it in this country, from Obama to Bill Gates, Steve Jobs, Richard Branson, even Jesus Christ, all sold themselves or their ideas. If you can’t sell yourself and make yourself known, make your ideas known, make your product known, then ain't nobody going to know how brilliant you are and you won't make your dreams a reality.

You know, there are six billion people on this planet that have a dream of some kind, everybody has a dream, it’s not how good your dream is or even the quality of your trade, it’s how good of a job the artist can do at being first in the minds of those that make the choices. Thus the Kardashians, Paris, and how about Ryan Seacrest- master examples. If you want to get the career you dream of and become known, learn more than just the arts, learn to sell.

Don't miss the final part of our exclusive interview, in part 6 with Grant Cardone, in our next issue, as Grant discusses with us another tip to actors getting work, and how what you believe about life after death affects your survival and success.

To see Grant's wisdom and magic on video, be sure to visit www.grantcardone.com

If you do not yet have the book that will transform your business life or entertainment career, 'Sell to Survive,' get it now, also get “If you’re not First Your Last – Sales Strategies to Dominate Your Market and Beat Your Competition,” and “The Closers Survival Guide – Close or Lose.”

To book Mr. Cardone for a speaking engagement or television appearance, contact management at www.starpowermanagementllc.com or call 310-226-7176.