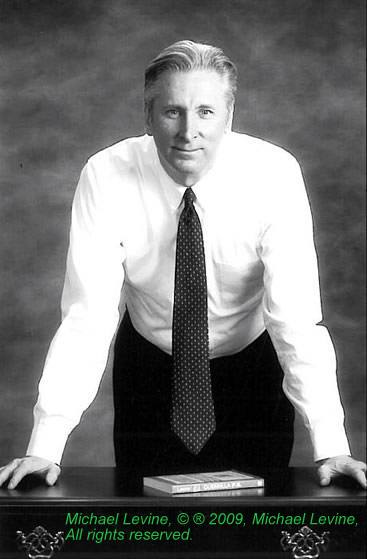 As the founder of one of the country’s most prominent entertainment P.R. firms, LCO-Levine Communications Office, Inc. www.LCOonline.com, Michael Levine has been called by U.S.A Today, “One of Hollywood’s brightest and most respected executives.” Mr. Levine founded LCO in 1983 and held the position of President for 22 years. He continues to serve with the title of Founder and has recently resumed the role of President.

MEDIA EXPERT: Regarded by the national media as one of the country’s most prominent media experts, Michael Levine has appeared on virtually every major national TV and radio show as a contributing media expert. His frequent appearances on TV include The Today Show, Nightline, Good Morning America, CNN, Fox News, ABC News, MSNBC, PBS, and many more. Additionally, Mr. Levine appears regularly on radio both nationally and locally. His quotes frequent many major print media ranging from Time Magazine, The Los Angeles Times, Newsweek, The New York Times, U.S.A Today, People Magazine, and beyond.

AUTHOR: Michael Levine is the author of 19 books, with his most recent titled, “Broken Windows, Broken Business” (Warner Books) www.BrokenWindows.com. His previous book “Guerrilla P.R.” (Harper Collins) is the most widely used introduction to P.R. book in the world, and his books have been translated into six (6) languages.

PUBLISHER: Michael Levine is the creator of the LBN E-Lert (Levine Breaking News) www.LBNElert.com, one of the world’s premier online newsletters, feeding the latest insider breaking news to over 360,000 readers in all 50 of the United States and 22 foreign countries including China, India, Japan, Australia, Russia, England, Israel, Germany, South Africa, Mexico, Canada and Korea.

WRITER: In addition to book writing, Michael Levine has written numerous articles for many prestigious magazines and newspapers including Psychology Today, The New York Times, The Los Angeles Times, The Wall Street Journal, U.S.A Today, and Reader’s Digest among many others.

CHARITY: The principal charity focus of Michael Levine’s life is his work to encourage self-education www.TheLevineMedal.org. As a self-educated man himself (only six months of college) and self-employed since the age of 18, Michael Levine works to inspire others to self-educate. In addition, Mr. Levine has given of himself to society by speaking at numerous unique locations for free, including seminars to aspirants in the entertainment industry, men’s and women’s prisons, and homeless shelters.

We are honored to feature here part two of our exclusive interview with Michael Levine, the power behind the stars. If you have not yet read Part One, be sure to do so here now first.

“Those who have easy, cheerful attitudes tend to be happier than those with less pleasant temperaments, regardless of money, 'making it', or success.” - Dr. Joyce Brothers

Bruce Edwin - The Hollywood Sentinel: I read you were friends with and represented Dr Joyce Brothers...

Michael Levine: I did, represented her in my early days of my career, and I think she's a very interesting teacher of psychology.

Bruce Edwin: You mention some fascinating stories in Guerilla P.R., which is a book any one should read by the way, whether they choose to get P.R. or work in the entertainment field or not; It’s just a fascinating read...

Michael Levine: The idea with Guerilla P.R. is with little or no money you can get the same results as fortune 500 companies If you know what you're doing and you learn how to be creative. Guerilla P.R. teaches us that any one can do it. Any one can get vast media attention.

Bruce Edwin: That’s amazing. I'm curious, you mention in the Guerilla P.R. book some of your influences which are interesting to find out. Obviously, with what you do, it requires a great deal of creative writing and inspiration, how do you get your self in that creative mindset to come up with these great ideas for publicity, and to write creatively?

Michael Levine: Well one of the things I do is I walk around the planet all the time with this bloody dictaphone, and I'm writing down ideas all the time.

Michael Levine: And then I take the ideas at later dates, and try to string them together, kind of like pearls in a necklace, Now one can figure out whether or not I've been successful at that, but that is essentially what I do. I'm a really curious guy, and I like interviewing people and learning about how they live and think. So any way I pick up information every where, I went to a play the other night and one of the actors of the play, his line was "a family is a charity, run by its sickest member." And that's kind of an interesting thing, if we think of a family as a charity run by its sickest member, that's kind of an interesting way of putting things...

Michael Levine: And I will use that no doubt, take it, adapt it, steal it in some way, so I can create something, hopefully of greater value.