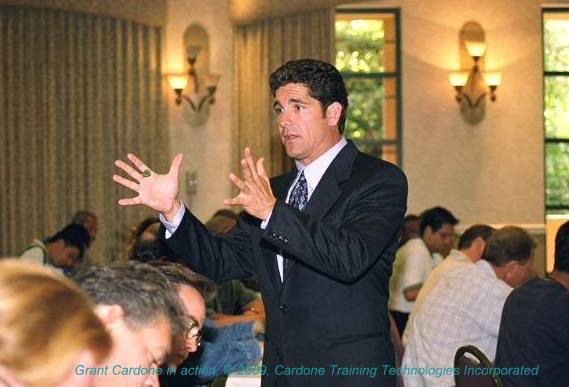 Grant Cardone defines leadership to its core, in its highest, greatest form. His massive energy, charm, and motivation of positive, successful thinking, are matched by few. Starting from modest beginnings, Grant Cardone, who is also an inventor, is also the founder and owner of three multi-million dollar companies, a successful software company, a sales training and consulting business, and a real estate company with a portfolio worth over 100 million dollars.

As if all that were not enough, Grant Cardone is now a successful author, and public speaker, lecturing around the world to industry leaders, managers, CEOs and entrepreneurs, on sales, money, finance, business strategies, and business expansion. If you have not yet read the first parts of our interview with Grant, go here now first to do so at PART ONE, PART TWO, and PART THREE.

Grant Cardone's work has had a profound influence on some of the most successful companies and artists of our time. We are pleased to give you here, Part Four of the exclusive interview with this legendary man that other top financial experts are calling ‘The entrepreneur for the 21st Century,’ Mr. Grant Cardone.

Bruce Edwin: Grant, is it true that the U.S. is being bought up by foreign interests, and is the United States in threat of being overtaken by foreign capitol or is that false?

Grant Cardone: Well, if I was the rest of the world I'd be buying America. Even Mexico, If I went to Mexico, if I had Mexican pesos, I'd be buying everything I could in America right now. If I was Canadian, I'd be buying every thing I could. If I was in England, look, they're getting half price on every thing. Not only has every thing been hammered, unrealistically hammered, but the euro to the dollar means I can not only buy America that's on sale, but I can buy it for half price, because the euro's so strong. So I don't know if there's a conspiracy or any thing to buy America up, but if I lived over there I'd be buying it up. I'd be buying every thing I could. Man, I can just tell ya' there's this one particular piece of property I have in San Diego right now that's being looked at by a group out of Mexico, a group out of Switzerland, a group out of India, and a group out of Belgium, so there must be somebody interested. Because America’s not going away. I don't care if there's unemployment, foreclosures, if we never produce any thing ever again, if we have no factories here, it doesn't matter, it's still America baby. It's America where you've got Kentucky Fried Chicken, and McDonald's, and bowling alleys, and movie theatres where you can go and watch 24 different movies in one day, you know, you have 96 screens, it's America! It's got great highways, great lighting, safe for the most part, you know, I dare any one to move to Iraq, and see how long you stay there. All these dissatisfied people. Go live in Panama if you think it’s so great!

Bruce Edwin: Ha! yeah. So do you feel that that theory is real about the so called "New World Order," the merger of one world currency, and all that?

Grant Cardone: And so I hear people saying all these conspiracy theories, and I'm like, OK, what's the solution though? Why don't you get your own world in order? And then, I remember people complaining about gasoline about a year ago. And I'm like, yeah, so what? What you're really saying is you don't have any money. Because if you were making a movie, or two movies a year, you wouldn't care. If you were an actor that's working on two or three or four movies a year, you wouldn't care what gasoline costs. You know, if you had a job, and you were producing at your job, and you were making it in the economy, you wouldn’t care! Look, that's not the problem! You have your attention on the wrong problem. You know, what's my world order like? Because most of the people I hear talking about the New World Order, ain't got any order.

Bruce Edwin: That’s great yeah. You’re obviously working in a lot of areas, what things have we not heard or read about that you are working on that you intend to manifest that we can expect in the future that we don't already know?

Grant Cardone: Well, I'm working on a program, we did the website, we call sales training VT.com. It basically stands for sales training virtual training.com. It's going to change the way companies prepare their sales force, and whether your sales force is 10 people, or 20 thousand, any thing you want to know about selling, attitude, motivation, follow up, prospects, everything it takes to drive revenue to a company, the employee will be able to log in on his computer, 24 hours a day, 7 days a week, go on, and get information from me, about how to drive revenue to that company, test out on it, an HR person or an executive can actually go in and see who tested out, what do they know, what don't they know, what do they need help with.

Grant Cardone: And I'm going to release that in about 2 weeks. I just got two book offers, a two book deal, one titled "Act Hungry," is the title we're playing with right now, how to succeed even when the economy stinks, and the other will be called "The 10 x rule," and this is a major, very well respected publishing company that wants to do these books.

Grant Cardone: And you know, I'm working on a radio show that will actually be on daily around the United States.

This article is © 2009, The Hollywood Sentinel / Bruce Edwin, All world rights reserved.