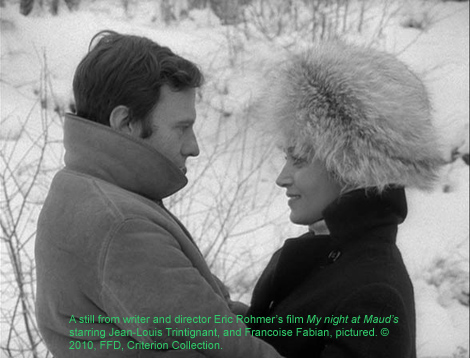 One of the finest filmmakers of our time, Eric Rohmer, also one of the founding leaders of the French New Wave movement in motion picture, passed away last month, he was 89. Born Jean-Marie Scherer, in Nancy, France, Eric Rohmer taught French and German literature for some time, then went on to pursue a career in journalism. After moving to Paris, and getting recognition for a film review he wrote, he then enrolled in some film classes, and fell in love with the craft of movie making.

In 1950, he self published the Gazette due Cinema with directors Jean Luc Godard and Jacques Rivette, and later wrote for, along with Andre Bazin, Godard, and Francois Truffaut, the influential film journal Cahiers du Cinema. It was here that the group founded the modern film criticism theory that motion picture can be effectively critiqued based on the personal life and philosophy of the director. This led to the auteur theory of filmmaking, which holds that the director is the leader and visionary of the film, not the actors, and that the talent is subordinate to the vision of the filmmaker.

In New Wave, dialogue and the story of the auteur director is king. It often incorporates philosophical, existential, radical poetics in to the dialogue, and often merges many styles such as action, romance, tragedy, or comedy in the same scene. Whereas most Hollywood films cut on the beginning and end of action, French New Wave often may begin coverage of a scene before and after any primary action, which creates more poignancy, realism, and portrayal of motivation for the character.

Eric Rohmer, who also produced and acted, achieved most recognition for his profound work as a writer and director. He wrote over 30 films, and directed over 50 motion pictures. With such classics as Pauline at the Beach, Love in the Afternoon, My Night at Maud’s, and Claire’s Knee among many others, his films often celebrated female sensuality, love, and freedom, with emotional and gender conflicts often at play.

French President Nicolas Sarkozy stated of the director, “Classic and romantic, wise and iconoclastic, light and serious, sentimental and moralistic, he created the ‘Rohmer’ style, which will outlive him.” The Hollywood Sentinel states, “The life of Eric Rohmer leaves us with his work, a great contribution to the world of cinema.”

© 2010, The Hollywood Sentinel, All rights reserved.