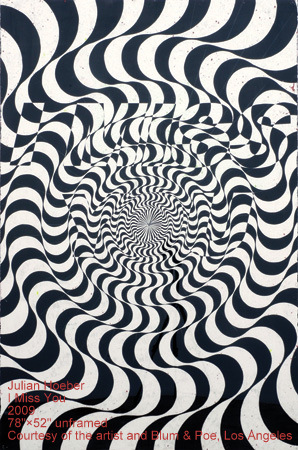 I am happy to report that the January 28-31 2010 Art Los Angeles Contemporary Show, at the Pacific Design Center, complements the more established FADA art show by focusing more on younger, living artists. If you read ARTforum, this is the show for you. Sixty five cutting edge galleries from around the world made the design and exhibition center their temporary home for the weekend.

At Angles Gallery, any one who says painting is dead should take a good look at Tom LaDuke's abstract large scale work. He's managed to make abstraction fresh juxtaposing surface concepts (smoothness, glossiness, and haze) with evidence of the brushstroke. It sounds simple but the results are delicious and unique. Another thing I notice about a gallery is what amount of reverence the staff has for the artist, indicated by intangibles such as tone of voice and how they address a guest in their space. Too often there is an element of commoditization that can come off as crass, or worse yet, disrespectful. At Angles, the staff very politely requested another patron, engaged in a loud conversation, who had inadvertently blocked my view, step aside. "She's trying to look at some art," he whispered. There was silence. It struck me as a sincere and, don't think I'm hokey for saying, noble attitude.

Which isn't to say I can't appreciate a good sales pitch. The staff at New Zealand's Starkwhite gallery really seemed to enjoy talking about John Reynold's mirthful "One Hand Read," an installation of small canvas cube shaped paintings, hung grid-style, with not quite candied background colors I imagine on a cover of a 1970's edition of the DSM. Each cube had a phrase such as "abject crime," "artificial lust," or "ego-centrism," taken from a liturgy of euphemisms, all of which equate to a pun on the role of the artist.

In addition to commercial galleries, there were nonprofit organizations such as LAND (Los Angeles Nomadic Division) both of which focus on serving and nurturing artists who might otherwise fly under the radar. To any young L.A. artists trying to establish themselves, I would recommend familiarizing yourself with these groups and what they have to offer.

At Kate Werble Gallery, the entire booth had been turned into a sort of factory, where under artist Christopher Chiappa's vision, cartoonish replicas of kitchen knives were being produced en masse. They were in stacks, on tables, in varying permutations of scale. The overall effect was memorable and surreal.

This was the inaugural year for the exhibition, and we arrived during the last few hours, as some galleries were already starting to de-install the work. Unfortunately, I therefor missed some of the names of some of the artists, including a really unique sound installation. Hair dryers, pooled on the floor in an angular corner space, looked like sculpture. As the viewer walked by, the motion triggered eerie, overlapping songs coming out of the individual hair dryers, as if from some ethereal creature at the bottom of an enchanted well.

Overall, the show was delightful and well done, a must see for contemporary art in LA.

© 2010, Moira Cue for The Hollywood Sentinel, All rights reserved.