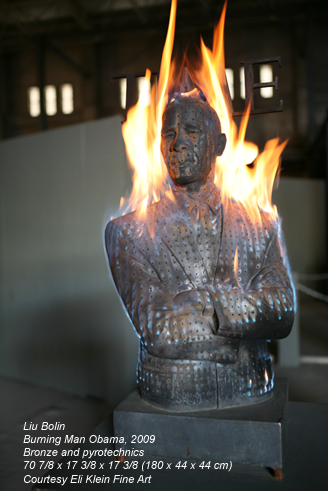 The Fine Art Dealers Association's 15th Annual Los Angeles Art Show may be nearly two decades old, but still has an edge. "We weren't allowed to set it on fire," Kim de Los Angeles, Assistant Director at Eli Klein Fine Art, told me in reference to one of the show's more inflammatory pieces, Burning Man Obama, by Chinese artist Liu Bolin, the number 1 searched artist on artnet.com. The piece was recently featured on an ABC news segment. The artist intends the bronze, which emits non-destructive flames, more as a playful nod to how "hot" or popular, the U.S. President is, especially abroad.

The L.A. Art Machine (an online arts publication and organization) produced "Vox Humana," a live action art performance in which street influenced large-scale painters, drawing from both the history of the mural and the graffiti movement, covered several specially built walls inside the convention center during the course of the exhibition. Another of the curated project spaces exhibited a show within a show, "Signs: Contemporary Middle Eastern Art," which included pieces such as Ali Hassan's "Noon 4" which emphasized the formal beauty of Islamic font.

The global feel of the show was enhanced by the first time participation of a gallery from India, Arushi Arts, a welcome addition to the geographic panoply of exhibitors which spans from Africa to Europe to Latin and North America, with a high concentration of New York and LA galleries, as well as a strong presence of South Koreans.

The London-based Rebecca Hossack Gallery had a good week; As I walked by I overheard a patron ask the gallerist, "Sell anything?" to which she cheerfully retorted, "Yes! Tons!" -And it did seem as if the pictures were flying off the walls. Greenwich, Connecticut-based Abby Taylor represented another success, expanding from the previous year, where she had one showroom, to include a second showroom of sculpture, set apart by her unique decision to install lush, lily white wall-to-wall carpet underfoot. During a brief conversation with Ms. Taylor, she expressed a conviction that last year's move from the Barker Hangar in Santa Monica to the larger downtown Los Angeles space was "the right thing to do." In fact, with unusual heavy rains during exhibition week, the show would have been difficult to pull off in the previous location.

At Chinasquare New York, artist Alex Guofeng Cao combined iconic images of art and antiquity (such as the Mona Lisa) with contemporary pop culture icons (think Marilyn Monroe) using a complex system of grayscaling miniature photos, like individual pixels, to create archival prints where the individual images of the former combine to form a composite figure of the latter, leading the viewer to meditate on the evolution of how images are disseminated, high versus low art, and the watering down of meaning in a visually oversaturated world.

However, if you aren't overstimulated yet, there's always the 2011 show, so mark your calendars for January 19, 2011. The 2011 show promises to be another exciting event, well worth the price of admission.

© 2010, Moira Cue for The Hollywood Sentinel, All rights reserved.