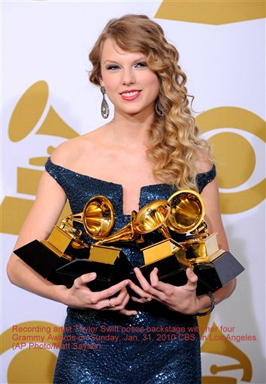 Music’s biggest night, the Grammy Awards were held Sunday, January 31st, 2010, at the Staples Center. Many awards were handed out, and while artists like Pet Shop Boys, U2, Yeah Yeah Yeah’s, Seal, Metallica, Bob Dylan, and Ministry were wisely nominated, at least some selections of winners were right on. Taylor Swift is one such winner. Young at 20 years old, beautiful, classy and mature -remember when someone inappropriately stole her mic and dissed her last year, and how sweet and dignified she was afterwards?- she is also incredibly talented. Taylor Swift scooped up not just one, but 4 Grammy Awards this year, including the coveted Album of the Year. Ms. Swift's album, Fearless, won both Album of the Year and Best Country Album. She won the Best Female Country Vocal Performance for the song, "White Horse," which is also the song that won Best Country Song." "White Horse" is from the Fearless album.

In accepting her award for Album of the Year, the final award given in the televised presentation, Ms. Swift commented that years from now when she is a grandmother telling her grandchildren the same story over and over again, it will be the story of her winning Album of the Year at the 2010 Grammy Awards.

Unlike some of her peers, Taylor Swift is sexy, without being trashy, and has been a good role model throughout her young career. She tells us, “ I wish all teenagers can filter through songs instead of turning to drugs and alcohol.” And she says, “What I`ve learned is not to change who you are, because eventually you`re going to run out of new things to become.” And while most are afraid of challenges, Taylor tackles them with bravado and declares, “I’m intimidated by the fear of being average,” and reminds us, “You only get so many firsts, (and) every one is a blessing.” How true.

Fearless is only Swift's second album, after her self-titled CD. She has also released a holiday CD.

Lady Ga Ga further deserves kudos, proving to many that did not know until this night, that she really is a top notch singer. Got that monsters?!

Established in 1957, The Recording Academy is an organization of musicians, producers, engineers and recording professionals that is dedicated to improving the cultural condition and quality of life for music and its makers. Internationally known for the GRAMMY Awards, the preeminent peer-recognized award for musical excellence and the most credible brand in music, The Recording Academy is responsible for groundbreaking professional development, cultural enrichment, advocacy, education and human services programs.

The Recording Academy continues to focus on its mission of recognizing musical excellence, advocating for the well-being of music makers and ensuring music remains an indelible part of our culture. The following is a partial list of some of the winners for music’s biggest night of the year. Due to the long length of The Grammy Awards, the complete list of winners can be seen at the official Grammy website at: