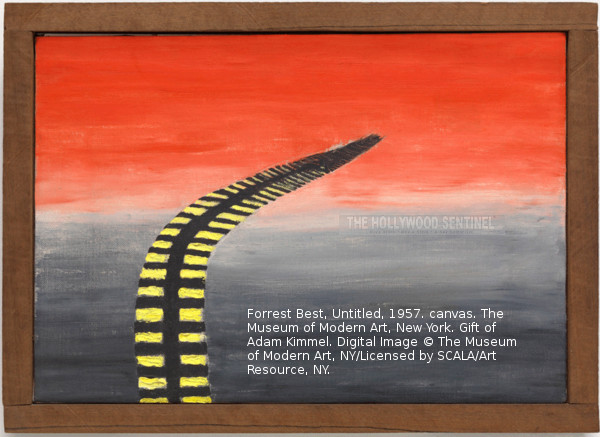 Forrest Bess was an American eccentric who spent most of his life in Texas outside of the limelight, yet managed to have his work championed by the powerful New York art dealer, Dorothy Parsons, who represented him until his death in 1977 and whose eponymous gallery continues to represent the estate. His visionary small scale paintings are receiving another look at the Hammer Museum in a rare solo retrospective now through January 5, 2014.

Bess was born in 1911 in Bay City, Texas, and spent most of his life there on a narrow strip of land accessible only by boat. He was a visionary painter, and his ideas on gender theory and performance (ideas which culminated in surgical self-mutilation) were ahead of his time, symptomatic of mental illness, or both, depending on your view.

If you are a fan of van Gogh and/or Basquiat, and any one or more of the following: Milton Avery, Mr. Imagination, Joseph Elmer Yoakum, Debuffet, Howard Finster, and Henry Darger; then odds are good you will be delighted by Forrest Bess. Religious yearning, expressed through a symbolic language for one and soft brightly colored geometric abstract forms fill tiny canvases alongside a glass case of letters to Parsons in this well-curated major exhibition. Viewing these unusual works is like peering through a keyhole into the unique world of Forrest Bess, and it's well worth a trip. 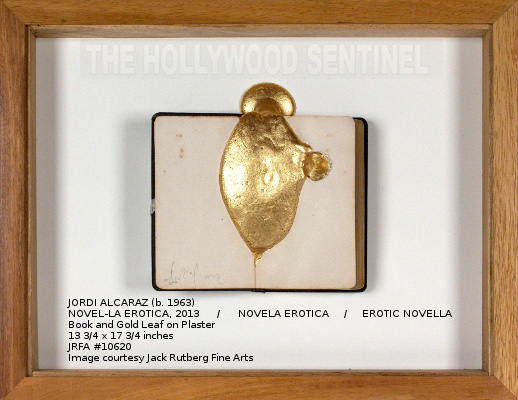 Now through December 21, 2013 at Jack Rutberg Fine Arts, thirty-three new works in “Altered States” bend or fracture barriers between genres of sculpture, relief sculpture, installation, painting, drawing and perhaps performance (one surface seem to have been stomped on, others shot, or poured over with tar; acts that suggest mutilation, aggression, and theatricality). Each work, or cluster of inter-related works, can be compared to a hybridized fruit spawned from the coupled influences of Surrealism and minimalism.

The ethos could be described, placing Alcaraz among his American antecedents, as quasi-Surrealist Joseph Cornell meets uber minimalist John Cage. The inherent tension in this coupling is lurid; between the examination and analysis of the psyche, layer-by-layer, and the depersonalization of the individual, there really is no compromise. Charles Simic said, “... Marcel Duchamp and John Cage use chance operation to get rid of the subjectivity of the artist. For Cornell it's the opposite. To submit to chance is to reveal the self and its obsessions.”

In this collection, blurring of subjectivity and objectivity is further subordinate to the repetition of blurred polarities: Self-referential loops of obsession-with-obsession, “seeing of” ways-of-seeing that eclipse rationalism. With Jordi Alcaraz, one senses the ubiquitous lament of fragmentation is merely jet lag and sensory overload. In “Altered States,” what could be an almost draconian homage to process itself is softened by an aura of clinical detachment and luxurious though restrained attention to surface, which produces the soothing narcotic feeling that it's going to be okay, because it always has been. There is violence, but poetry and purpose.

Jordi Alcaraz, a Spaniard, is compatriot of and has been repeatedly compared to Antoni Tàpies (1923-2012). When placed among fellow Catalonians Miro and Dali, Alcaraz's broken frames, burned books, and lines erased could be interpreted as landscapes, still life, and portrait (portraits of the artist, in particular). “History,” one of the largest scaled works in the selection, referencing Tàpies' 1950-1951 “Natural History” series, juxtaposes antique wooden balls against an eerily marred, metallic reflection that is an object d' art in itself.

Tàpies' proto Arte Povera matter paintings of the 1950's, incorporating ground sand into pigment, may have influenced Cage. Best known for his avant-garde conceptual compositions, Cage also produced, amongst more a series of works on paper in the 80's and 90's, using fire and smoke in lieu of paint and brushes. These works resonate with Alcaraz's coolness so much that contemplating “Altered States” made me want to take another look at Cage on paper.

Wall pieces, with titles such as “Between Two Painting Ideas,” and “Thieves of Drawings” resemble the view from a battleground, post-devastation. Only the war was fought between abstractions such as language, form, line, history and perspective, and common materials such as plaster, plexiglass, metal, wood, ink, pencil, and raw cotton fiber. Does the book as symbol repeated as a visual motif, suggest perhaps that ideas are the source of conflict?

The works are present in a unified and understated palette; the tawny colors of smooth walnut and whiskey, an assortment of whites and off-whites, steels and grays; and recurring shadowy, pear shaped figures sketched with fervor in black charcoal, bringing to mind the style of Kathe Kollwitz. 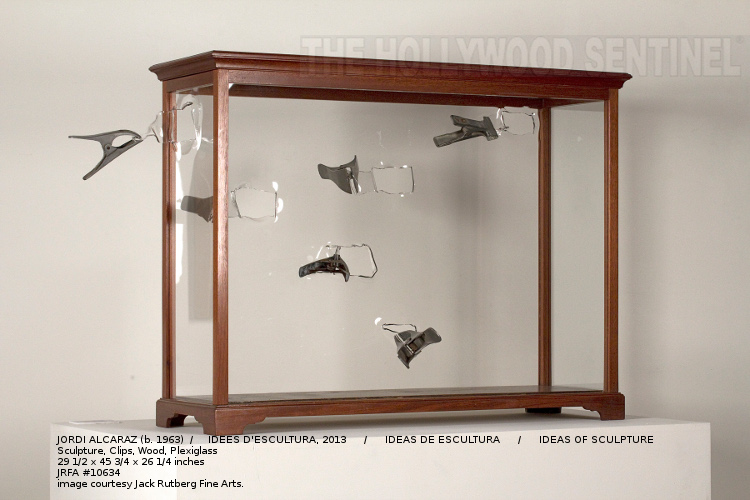 One of my favorite pieces, “Ideas of Sculpture,” is shaped like a fish tank and trimmed like a cabinet. The sides of the “tank” are ripped open with clamps in multiple forged “tears” that must have been predicated with extreme heat. Is the sculpture an idea, or have the ideas flown out of the box?

Altered States is not just another gallery show. Like the Francisco Zuniga exhibition held immediately prior, this show is a museum-scale major exhibition. Highly recommended go-see.

My personality is more important than any of these little facets of my activities."
-Salvador Dali

Though the show was only on display in its entirety for one weekend at Gallery 319, selected works from the daughter of the publisher's personal collection of Salvador Dali lithographs are still present and others are still available through the gallery.

Lithographs published by Pierre Argillet, Madame Christine Argillet's father, are the highest quality Dali prints available in the world. Their authenticity is pedigreed; the traditional copper plate process used, in accordance with Argillet's high standards, guarantees this exclusively. Pierre Argillet preferred to cut professional ties with Dali after twenty years, on good terms, rather than risk losing control of the print process through cheaper, faster methods such as Giclee, which Dali turned to in his later years, inadvertently leaving a window of opportunity for fakes and frauds being sold for more than they were worth.

Today Christine follows in her father's footsteps, taking a protective role toward the Modern Master, who is no longer around, of course, to defend his own reputation. From the age of 7 to 17, Christine enjoyed Dali's regular visits to her home, where Dali and her father worked together on his prints. When I spoke with Christine about Dali, I not only learned more about his work, and especially his work on paper, but also about Dali, the man, as known by his intimates. 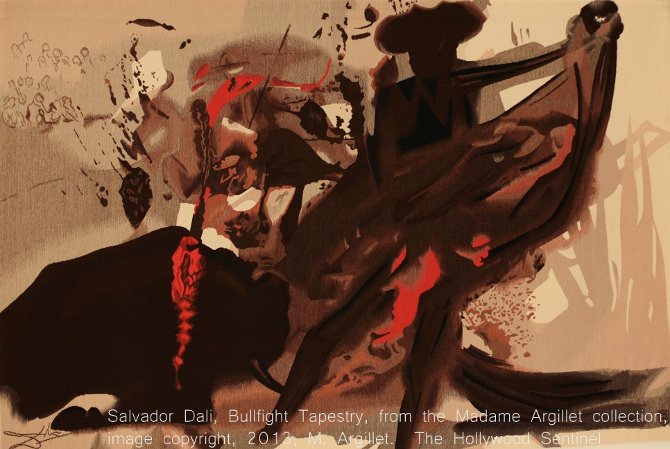 I'll be frank: there are many stories about Dali that focus on his shocking behavior. Dali is the man the public most closely associates with Surrealism, even if it was Andre Breton who was most devoted to the cause. Dali's iconic painting, “The Persistence of Memory,” is as recognizable as Rembrandt's “The Mona Lisa,” van Gogh's “Starry Night,” and Gustav Klimt's “The Kiss,” has been reduced in our popular imagination to a caricature; one that can be summed up as “the guy with the crazy mustache.”

The Salvador Dali I was introduced to through Madame Argillet is not the celebrity artist who deliberately played the part of mad genius, for his own entertainment. The Dali I met in 2013 is the one who still makes the eyes of a grown woman twinkle when she recalls his kindness to her when she was but a child.

Childhood for Salvador Dali was marred by a singular major traumatic event: His older brother, while still a toddler, had died just as his mother became pregnant with Salvador, and his parents re-used the name "Salvador Dali" a second time. Thus, when Salvador was very young, and saw his older brother's tombstone, he was understandably confused to see his name there. He couldn't understand why he was both living and dead.

Important symbols in Dali's work include the universal symbol of the rose or cabbage, referring to all that it has classically referred to, disembodied long eyelashes as a symbol of his self, and symbols representing a panoply of literary allusions to Venus in Furs, Dante's Inferno, and The Songs of Maldoror. Despite his artistic and intellectual sophistication, Christine explained, Dali was not a political person. He could be naive, and also child-like. In his lithographic work, he could experiment more with line, texture, and process than in his exquisitely rendered lush paintings. For example, in "Medusa," seen to the right on this page, he placed a dead octopus he had found on the beach in ink on the paper, and then used contour lines to create the form of the mythical seductress.

This is a Dali who, unlike Picasso, found bullfights brutal and barbaric; a man who married and remained faithful to one woman throughout his life; a man who drew upon a deep knowledge of art history, literature and mythology, not merely fetishism. I would sincerely like to encourage the artists, art historians, and public who are reading this now to open their eyes, and hearts, again, to Dali.