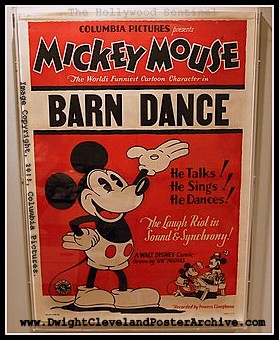 For thirty six years, Dwight Cleveland has searched the world for rare movie posters. What began as a love for the movies and an eye for the unique art of the film industry, became the largest, most complete movie poster archive in the world. The archive includes every Best Picture winner at the Academy Awards, and the Top 100 films of all time as rated by The American Film Institute and The Internet Movie Database.

It's classic Hollywood to modern, and it's the only movie poster collection of its kind. This vast archive from every movie genre includes over 12,000 movie posters from over 55 countries. It is the most comprehensive representation of the film industry that exists. Every great movie you've ever heard of is a part of this collection. And, many movies are represented in multiple languages-not just one American movie poster, but several from different countries. The archive is housed in a secure, temperature controlled environment and is organized by film genre. The archive has been professionally valued at over three and a half million dollars. Some individual posters are worth over $20,000.

This rare and unique collection is now available for purchase for select buyers who want to expand their legacy in the world of entertainment which will stand the test of time. Interested parties, and fans alike are encourage to take some time and view some of the great posters in the collection at the official website below. And you can read more press coverage or discover more about Dwight Cleveland.

The exciting Dwight Cleveland Poster Archive incredibly includes posters from every Academy Award Winning Motion Picture ever made, as follows:


This story is ©2013, The Hollywood Sentinel, all world rights reserved.