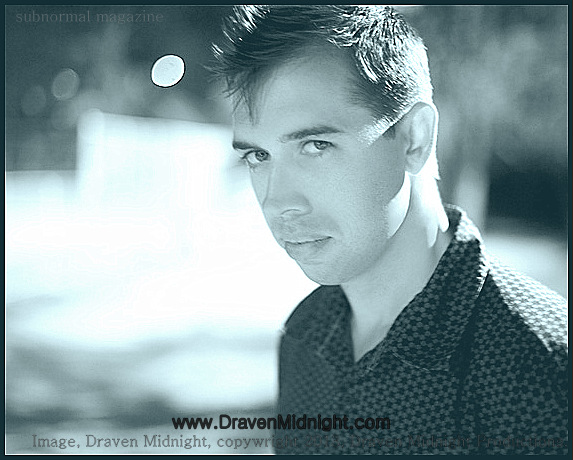 A computer and internet technology expert who works as the head of I.T. for one of the world's leading entertainment magazines, Draven Midnight is even more widely known for his unique and ground-breaking music as a solo artist. We had the pleasure to sit down with the artist under the billowing palm trees of a cool Los Angeles autumn night amidst a full moon, and asked the singer, guitarist, programmer and recording engineer some questions for the record, to share here with the world.

The Hollywood Sentinel: Who are you, for those who don't know?

Draven: I am a musician and technologist based in Los Angeles.

The Hollywood Sentinel: A technologist, cool word! What do you do for a living with that exactly, and exactly what creatively?

Draven: For a living I write software and coincidentally it also covers the cost of my hopeless addiction to recording music.

The Hollywood Sentinel: How did you start doing this?

Draven: I started by picking up as many trade magazines as I could find and began to really analyse how things were done in the industry in those days. And as if almost by accident, I then set up a roadmap over a lengthy course of time to hit certain milestones in my music career. 'Moments' or 'monuments' I could call achievements or a 'level up' if you will, in how things operate out in the wild.

The Hollywood Sentinel: When did you realize you wanted to make music?

Draven: I've always wanted to make music. I'm told I was practically born singing. One of my earliest memories is waking up and hopping out of bed humming Superman II theme music.

Hollywood Sentinel: (laughs) Where do you get your inspiration to write and create?

Draven: Inspiration comes and goes in the moment. I know when it hits that I have to act on it in order to capture it for a future reference to be rehearsed or recorded. If I don't then it's gone forever. And that (is unfortunate), so I try to keep those to a minimum.

The Hollywood Sentinel: Why do you think some artists often have it so tough?

Draven: Artists are a passionate bunch and sometimes the same passion that fuels them is also what trips them up. I learned for my own well-being to let things be as they are and to only get attached if I've spent a considerable amount of energy into something. Otherwise, if it's out of my control then don't fret on it.

The Hollywood Sentinel: What is your world view?

Draven: Be kind to others.

The Hollywood Sentinel: What is your motto you live by?

Draven: (Again), be kind to others. Tell it like it is. Walk tall, keep your head on straight and march on forward.

The Hollywood Sentinel: How do you want to be remembered?

Draven: As a worthy contribution to the history of recording arts. Someone who had something to say in his own way that tends to shed a little light or a little shade on things every now and again.

This story is ©2013, The Hollywood Sentinel, all world rights reserved.