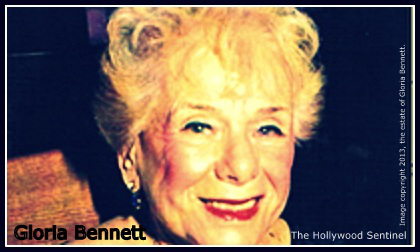 According to the Los Angeles Times, "Gloria Bennett, 92, ... was a noted opera singer, voice teacher and author in Hollywood for over forty years. Her students included such notable artists as Exene Cervenka, Susan Rhee, Keb' Mo', Dexter Holland from The Offspring, Anthony Kiedes from the Red Hot Chili Peppers, Axl Rose from Guns N' Roses, Vince Neil from Motley Crew and many, many others."

Producer and talent manager Bruce Edwin of The Hollywood Sentinel states, "I spent hours one day going through directories and interviewing nearly 50 vocal coaches to find the best one for my client. Gloria Bennett was the most straightforward, honest, professional, credentialed, experienced, and talented. She was a no nonsense, sweet, cool lady who I admired. She was the best, and I miss her greatly."

Gloria was petite, less than five feet. Gloria came from a musical family. Her mother was a piano teacher and her father sang in the chorus for The Metropolitan Opera Company. Formal training for Gloria as an opera singer began at the age of thirteen in New York. Some of Gloria’s highlights included performing with the Amato Opera Company, hosting her own radio program devoted to classical music, and helping form the Sacramento Opera Company. A coloratura soprano, Ms. Bennett studied with such greats as Queena Mario, Galena Prengel, Gunda Morden, Rosalie Miller, Felix Popper and Maestro Nicolai Palumbo, among others. Her father's daily routine consisted of daily salt water gargles in the nose, mouth, and throat to protect the delicate membranes from airborne irritants. She passed on his advice to her students, as well as teaching pressure points for massaging the vocal chords, remedies for stage fright ("Rescue Remedy" to be precise), warm-ups and proper technique.

I can still hear her voice, (literally, on tapes of our sessions together) saying "This is your instrument," and recall her gesturing elegantly from the nasal passages, all the way down to the diaphragm. Once she had me place my hands on her back as she demonstrated proper breathing technique, so I could feel how the air filled her, front and back, top to bottom. She taught me which muscles to clench and how to stop tensing up my shoulders. She actually had me hang my head upside down and sing, which produced a very different, unself-conscious sound (though it would look silly onstage).

As time went by, it became clear she was having difficulty with some aspects of getting older on her own. She talked about her children more and more and wanting to be near them. It was sad but not altogether shocking when her son helped her move to a nursing home in San Diego, which effectively ended her teaching career. She was by that time pushing ninety and had been teaching part time. I went to visit her in her home for a final lesson about two years before she passed, in 2010 or 2011. Though medication had changed her, she was still funny, and spirited, and kind, and, of course, right on key.

"The only thing I care about, the thing for me, the one thing, it has always been the voice," she told me once. She loved to teach. She knew everything you could know about singing. When we did talk about her famous clients, she was classy. Her son, Martin, said, "My mom loved what she did. She was never rich monetarily, but was rich in how she lived her life and gave to others." Thankfully, she left her knowledge behind in a book, so you at home anywhere over the country or world can get the same information that Gloria gave her students. The book is called Breaking Through, From Rock to Opera, the Basic Technique of Voice and is available online in paperback through Amazon dot com here. If you are serious about being the next Adam Lambert or you just want to make it through your part in the local Christmas Choir without any dirty looks from the choirmaster, this is a book you can learn from.


This story is ©2013, Moira Cue / The Hollywood Sentinel, all world rights reserved.