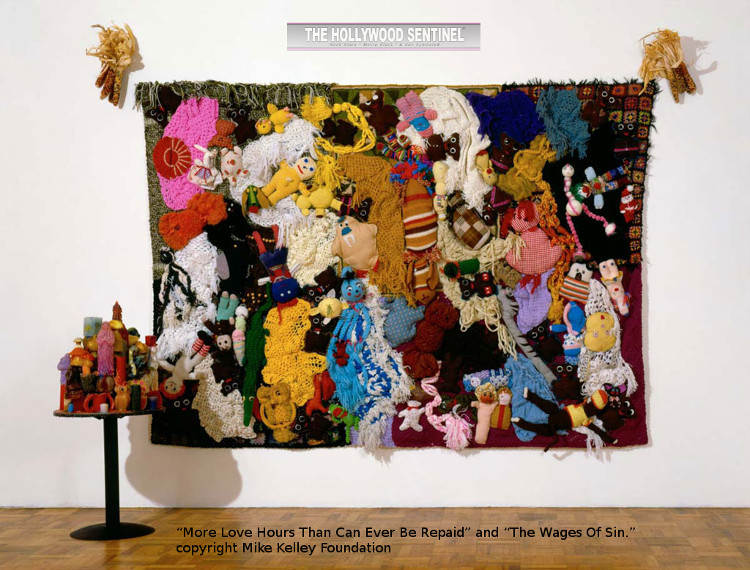 LOS ANGELES - If you are able to get to the Museum of Contemporary Art at the Geffen Contemporary before July28, the Mike Kelley retrospective is a must-see. With more than 250 works in a broad variety of media, this is the largest solo show o ever be held for this historic artist, who, distraught over a break-up, committed suicide in 2012 at the age of fifty-seven.

It would be impossible to describe every work in the show, so we'll focus on a few of my favorites. The first piece I'll describe is probably Mike Kelley's best known. It's actually two pieces, which the artist insisted always be exhibited together, called “More Love Hours Than Can Ever Be Repaid” and “The Wages Of Sin.” “More Love Hours” is an afghan / canvas hung on the wall with assembled, stitched together used stuffed animals that the artist purchased from second hand stores (and a little dried corn, just in case you didn't get this is supposed to be kitschy). The idea of love hours is usually interpreted as a debt that the children owe the presumably female presence who has lovingly sewn or knit toys and blankets hour after hour. But the toys themselves are falling apart because of the infinite love hours of children carrying them everywhere and soiling them in the process. The “Wages of Sin” a small end table covered with melted wax candles. With the MoCA exhibit of these two pieces, there was also a stereo on the ground playing a sound track of a disturbed monologue wherein the artist discusses suicide obliquely, as an act wherein assistance of a young woman is requested and the ultimate vengeance toward the artist's mother is enacted at his own expense. The tone of the monologue is bitter and needy, passive-aggressive, and highly neurotic. And it's some of the less troubling material in the exhibit. Across the hall from “More Love Hours” was a room filled with video whose subject matter included a motley crew of carnival-esque deviants assembled to watch the ring leader shackle a bride figure and spank her until her buttocks bleed, and another video wherein a well-off middle aged woman seduces a barely teen aged boy. Themes of pedophilia, crude sexuality, repressed memory, and brutality run as leitmotifs throughout the exhibit. In “Pay for Your Pleasure” more than forty portraits of prominent thinkers (all male) are combined with quotations about creativity and violence. For example, Andre Breton: “The simplest Surrealist act consists of dashing down into the street, pistol in hand, and firing blindly into the crowd.” These paintings are always exhibited along with a single painting of a local serial killer, and a donation box to support victim's rights. Here below the new MoCA director, Philippe Vergne, formally of the Dia Art Foundation in New York, discusses the current retrospective.

WASHINGTON, D.C. - Swiss artist Meret Oppenheim, whose iconic fur-lined saucer and tea cup (inspired by a friendly breakfast in Paris with Pablo Picasso) was the first sculpture purchased by New York’s Museum of Modern Art, exhibits collaborative work and work inspired by the theme of friendship at the National Museum of Women in the Arts’ new show, “Meret Oppenheim: Tender Friendships” through September 14, 2014.

NEW YORK - The Museum of Modern Art’s major retrospective devoted to the art of Lygia Clark (Brazilian, 1920 –1988) is the first comprehensive exhibition in North America of her work. On view through August 24, 2014, "Lygia Clark: The Abandonment of Art, 1948 – 1988" comprises nearly 300 works, ranging from the late 1940s to the early 1980s, including drawings, paintings, sculptures, and participatory works. Drawn from public and private collections, including MoMA’s own, this survey is organized around three key themes: abstraction, Neo-Concretism, and the "abandonment" of art. Each of these axes anchors a significant concept or a constellation of works that mark a definitive step in Clark’s career. While Clark’s legacy in Brazil is profound, this exhibition draws international attention to her work. (Source: MoMA.org)

This content is copyright, 2014, Moira Cue, The Hollywood Sentinel, all rights reserved.