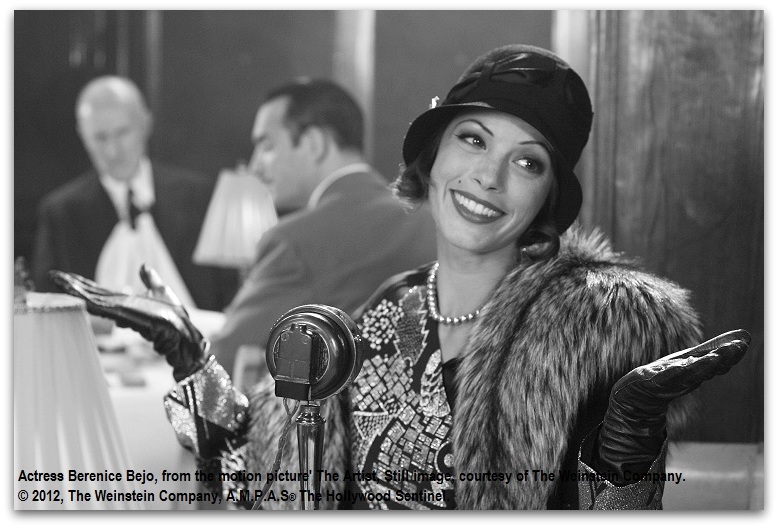 Born in Argentina, Bérénice Bejo arrived in France when she was three years old. She made her feature film debut in the 1996 film festival favorite LES SOEURS HAMELT (THE HAMLET SISTERS). Following a breakout role in Gérard Jugnot’s hit 2000 comedy MOST PROMISING YOUNG ACTRESS (MEILLEUR ESPOIR FEMININE), Bejo made her American feature film debut in Brian Helgeland’s A KNIGHT’S TALE, starring Heath Ledger. She subsequently starred in Laurent Bouhnik’s 24 HOURS IN THE LIFE OF A WOMAN (24 HEURES DE LA VIE D’UNE FEMME), adapted from the famed novella Letter from an Unknown Woman. She has starred in two films with director Seve Suissa, THE GREAT ROLE (LE GRAND ROLE) and CAVALCADE in 2005.

Jean Dujardin starring as George Valantin in The Artist

One of France’s biggest stars, actor/writer/director Jean Dujardin began his performing career in Paris comedy clubs. In the late 1990s, he co-founded the popular sketch comedy troupe Nous C Nous, which broke through to the French public through multiple wins on television talent competition series “Graines des stars” and went on to appear on France’s most successful talk shows. Mr. Dujardin’s solo career began to take off when he became the star of the hit sitcom “Un gars une fille,” which aired from 1999 to 2003; he also wrote several episodes of the series. After acting in the short ensemble comedy A L’ABRI DES REGARDS INDISCRETS 2002, Mr. Dujardin made his feature debut in the 2002 comedy IF I WERE A RICH MAN. Increasingly prominent film roles in films such as MARIAGES (2003) followed and in 2004, Dujardin starred in and wrote the hit comedy BRICE DE NICE, (2004), which was based on his original sketch.

In 2004, Jean Dujardin acted in his first screen drama, Nicolas Boukhrief’s LE CONVOYEUR by Nicolas Boukhrief. He began his successful collaboration with writer/director Michel Hazanavicius with his star turn as secret agent OSS 117 in the filmmaker’s hit spy pastiche OSS 117 - CAIRO, NEST OF SPIES. Mr. Dujardin’s performance as the suave spy garnered him a César Award nomination for Best Actor. He and Mr. Hazanavicius reteamed for the sequel, the equally beloved OSS 117 – LOST IN RIO, released in 2009.

Jean Dujardin's other credits include Jan Kounen’s comedy 99 FRANCS, Franck Mancuso’s crime drama COUNTER-INVESTIGATION; Francis Huster’s A MAN AND HIS DOG with Jean Paul Belmondo; James Huth’s comic western LUCKY LUKE, for which he co-wrote the screenplay; Bertrand Blier’s THE CLINK OF ICE; Guillaume Canet’s LITTLE WHITE LIES with Marion Cotillard; and Nicole Garcia’s A VIEW OF LOVE. Jean Dujardin's performance in the outstanding motion picture THE ARTIST has expanded his international attention, and revealed the brilliant talent of this charming star to the world.

Michael Hazavanicius; Writer, Director, and Editor of The Artist

Michael Hazanavicius made his feature directorial debut in 1999 with MES AMIES (MY FRIENDS), which he also wrote. He began his career as a director in television. He co-wrote and co-directed the cult television movie LA CLASSE AMÉRICAINE, which dubbed an absurdist mystery narrative over clips from American movies. Mr. Hazanavicius made the movie into feature films in 1994, when he made his acting debut in FEAR CITY: A FAMILY-STYLE COMEDY (LA CITÉ DE LA PEUR). Two years later, he transitioned into feature writing as well, with credits including the comedies DELPHINE 1, YVAN 0; THE CLONE (LE CLONE) and LUCKY LUKE AND THE DALTONS. With the motion picture THE ARTIST, Michael Hazanavicius has given the world a brilliant work of cinematic art that will be loved for generations to come. He has humbly proven himself worthy of recognition as one of the great new filmmakers of our time.