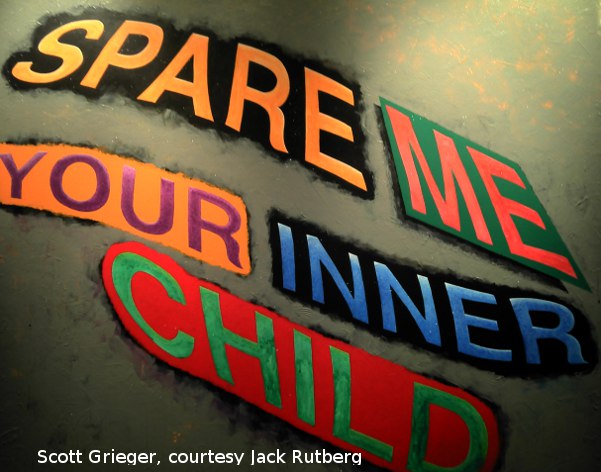 The LA Art Show is a great place to spend money. It's not simply the fact that in unstable markets art is a safe place for holdings, it's the truth about painting and other fine art that makes it a valuable investment.

Some people get rich playing "follow the leader." That's a safe bet. A higher level of entrepreneur, the kind that make the history books, is a leader; he who sees the value in what everyone else sees as worthless and is not afraid to be the first to try something new. When it comes to art, only the most intelligent and wise collectors and dealers have the ability and know how to appraise the work of a living artist. Consequently many of our most brilliant artists—Carravaggio, van Gogh, Camille Claudel and many whose works have been destroyed and names erased from the history books—were undervalued during their lives and in some cases indefinitely. 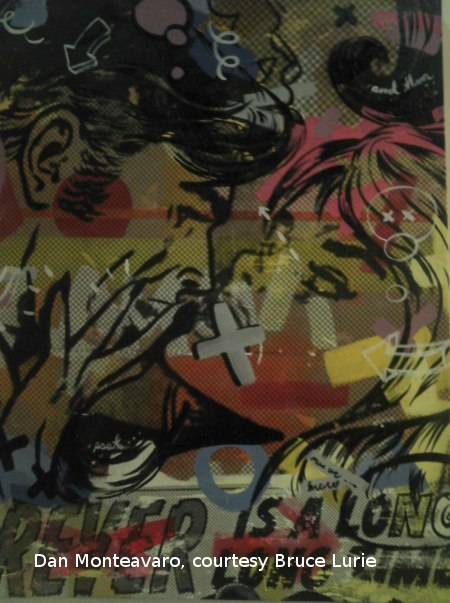 How could any one brilliant enough to create a master work of art fail to solve any problem, including poverty and invisibility? Perhaps they cared more for their art than for themselves, knowing that art is a great gift to society. Or maybe they ingested too many toxins in the process of making art and lost their minds. (You've heard the phrase "mad as a hatter," coined because in 18th and 19th century England mercury was used in the production of felt, which was used in the manufacturing of hats common of the time. Hence many hatters built up enough mercury in their systems to develop madness via mercury poisoning. Many of the cadmiums and both oil and acrylic mediums are highly toxic, and it is more common than not for even contemporary artists to work in studios without adequate ventilation.)

The grand purpose of art, perhaps, is to transcend the boundaries of culture and language, yet many otherwise intelligent people claim to be "uneducated" about art. All you need to know is that every painting is an oracle, and the act of seeing is another form of conversation; between you and the divine. You must, as Einstein would say, "see with your own eyes and hear with your own ears." If you hate something, don't be afraid to say so. It's just as valid as loving it and there is no right or wrong way to look at art.

My experience at the LA art show this year provided me with so many wonderful conversations. The first person I was pleased to meet was consummate professional Bruce Lurie, of the eponymous Brue Lurie Gallery. I listened to a mural panel. I questioned the dealer of a work by a well-known mid-century female artist why it was necessary to qualify the value of her work in relation to her sex life. I learned that Claudette Colbert, far from being destroyed by the House of Un-American Activities Committee (HUAC), had so wisely invested in young and up and coming (like that Pablo guy) that she lived her exile in the Bahamas, in the lap of luxury, surrounded by a stable of handsome young men.

I saw a lot of things I've seen before, so I'll stick with talking about things that felt like new discoveries. After all, sometimes less is more. Sergy Fedotov's thick, from the tube oil paitings were more than a little troubling, in a good way, merging the influence of van Gogh, Anselm Kiefer, and Lucien Freud.

The China: FUSION exhibit press pack is the first of its kind I have ever received: Inside the bag, there was a box which contained a lovely golden dragon made of crystal. I appreciate such a lovely gift, and I keep the souvenir close to my nightstand, where she guards my dreams. The China: FUSION exhibit within an exhibit was organized by China's National Base for International Culture Trade, under the commission and guidance of the China Ministry of Culture and Shanghai Municipal Culture Radio and Television Bureau. The selected artists, from Mainland China, each take an unique approach toward the fusion of Eastern and Western culture through content and form.

Kang Shixin's "Act Rashly and Alert the Enemy" is one of those pieces that is almost more fun to read about than look at. The title refers to an old Chinese saying, "stirring the grass may alert the snake," which means that one should check out and clarify every doubt, and then move on; by remembering to do this, one can cast a light on the hidden truth. 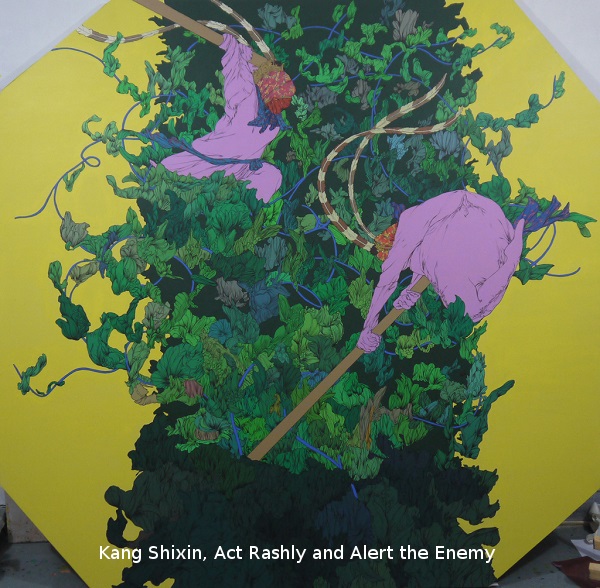 Because of its many layers, Fang Xueyl's work brings the viewer back over and over again, each time finding something different. She draws inspiration from traditional Chinese calligraphy, Western classical music, and the modern Abstract Expressionist movement. Pan Xinyl's voluptuous balloon-like nudes remind me of genetically engineered Boteros, with bright red skin and a dramatic growth rate (her work offers a critique of Chinese addiction to economic expansion and the environmental price of unregulated, unlimited growth). The implication, once again, is a clarion bell calling for national self-reflection (something we could use a little more of in the West, too).

Occasionally I'm baffled and repelled by a work, and that is interesting to me also since it happens less frequently. At ADC&Buiding Bridges, the Argentinian artist Andrea Juan presented a video installation called SERIES NEW SPECIES which I either misinterpreted, or it seemed to make light of global warming by suggesting that any mutations that occur would be colorful, cute new creatures made of synthetic yarn. I'm not sure where the scientific data backs that one up. The theme of new forms continued with the Brett Wesley gallery based in Las Vegas. I had no idea there was a contemporary art scene of note in Las Vegas, but Chris Bauder's unique technique of pouring latex paint into ceramic lids, creating a form, and arranging it on a canvas in his "Study of Navels," convinced me that something good is going down in Sin City. Mark Rowland, who runs Allure Fine Art Gallery on Freemont Street, is a good place to start if you're looking for more detail for art lovers on the various sections of the city.
Meanwhile in Nevada City in Northern California, sculptor husband-wife duo of Slaughter/Gudmann at TEN472 Contemporary Art, create joint projects which differ from either artist's individual projects. 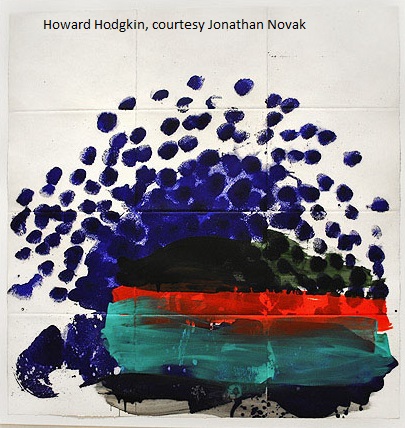 Jonathan Novak Contemporary Art deals only the work of internationally recognized artists, two of whom, Howard Hodgkin and Wayne Thiebaud, I have special affinity for. Howard's work in 2012 is amongst his best to date, and I suspect he knows it, with titles such as "When Only the Best Will Do." Tongue-in-cheek attitudes about art and consumer culture abound, but perhaps no one hits the nail on the head as dead-on as the artist who calls himself, "Desire, Obtain, Cherish," whose giant sculptures of multi-colored, melting blow pops were one of the big crowd-pleasers of the event.

"Letters from Los Angeles," a series of text-based visual curated by Jack Rutberg, gave me the a chuckle when I stumbled upon a painting by Scott Grieger with the message, "Spare me your inner child." This all-star show within a show contained work by too many art stars to list, but what was most notable to me is that the curatorial concept and execution was at least as good as the work. It's rare to see a show that, as a whole, is greater than the sum of its parts. Kudos to Jack and company!

If you're looking for an art dealer who leads the pack in independent evaluation, free from the constraints of being in a particular place at a particular time which limits so much of the contemporary market, look no further than Beverly Hills, where Stuart and Beverly Dennenberg show, by appointment, work that stands on its own merit, including artists who would rather make art than put on a dog and pony show. If the work can pass muster with the Dennenbergs, it's a good value. Abby Taylor, in Connecticut, is another dealer who doesn't sell just anything; she understands the difference between today's flash in the pan and a wise investment, and only represents the best work an artist has to offer, thus providing maximum value to collectors. While some dealers make a killing, controlling the market and artificially inflating the work of a select few, others make a living offering collectors genuine long-term investment opportunities.

Every one in a while I see something in a show catalog months after the fact that charms my socks off, despite having missed the actual work in person. The Surovek Gallery represents American artist Jamie Wyeth. I didn't notice this canvas titled "My Seal" before, but there's just something a little delightfully off about the scene of an aquatic creature on what looks like a farming landscape with a row of pines and what I guess is a monumentally oversized rusting fan.

I love new discoveries that remind me of old things I don't see enough of. I have long been a fan of Paula Modersohn-Becker, and I see something of her spirit and intimate understanding of the oft unheralded power of motherhood in the Chinese artist Hao Li, whose collectors include the former Governor of Utah, Jon Huntsman, and his wife.

I also love going back to see Veronica at Egenolf Gallery every year. She specializes in Japanese prints, knows her material inside and out, and is a pleasure to listen to. This year she generously gave me an in-depth analysis of a charming print by Hokkkei (1780-1850) of a demon preparing to confess his sins on a writing tablet. Perhaps an indicator of my dark sense of humor, the demon's facial expression intrigues and delights me.

Last but not least, a few more notable mentions: "Monkey Pioneers From Outer Space," and by Chris Roberts-Antieau at Red Truck Gallery for outsider art fans, a gorgeous Debuffet offered by Rosenbaum Contemporary, out of Boca Raton, and Francisco Toledo's "Fish with Swimmer" at Latin American Masters all delighted me. Toledo is the last survivor of his generation and school of artists, who embues his work with a magical realism that ignites the imagination of the viewer.


I'm glad the show organizers extended viewing another half hour on the closing day, or I might have missed Blue Rain Gallery, specializing in contemporary and traditional Native American art, tucked in the far back corner of the exhibition hall. I had the opportunity to witness a very happy couple purchase a piece called “Ancestral Man” by Preston Singletary. This extraordinary work is made of blown and sand-carved glass with abalone shell and hair, and seemed to emanate a palpable aura of its own, if that's possible. I have no doubt that these lucky buyers will get more than their money's worth. 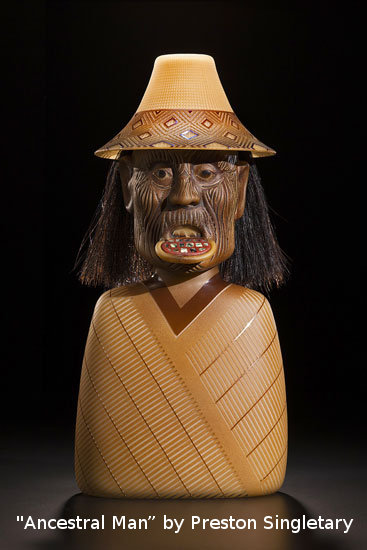 While value is undoubtedly a virtue we hold dear at The Hollywood Sentinel, it's most fitting to our purpose to end this recap with a touch of glamour, a Morgan Ervin multimedia image of Hollywood icon Judy Garland. Part of a larger collection of famously imploded stars including Marylin Monroe, Elvis, and Curt Cobain, "Judy #1," like the others in this series, overlays color and photography with a quote that sums up the artist's life in a nutshell, in Judy's case, "If I am a legend, why am I so lonely?" Judy, Judy baby .... didn't anybody tell you? It's always lonely at the top. 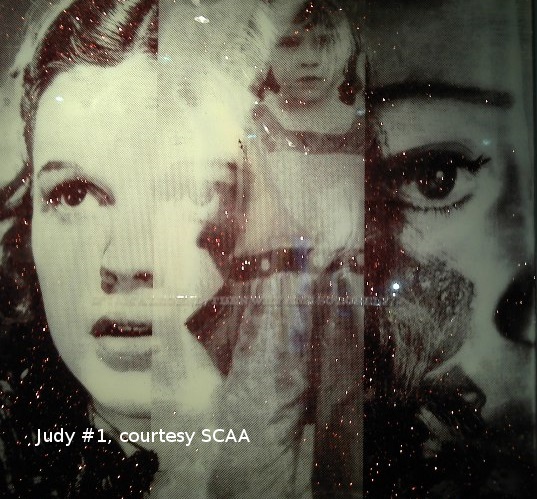