The Great Gatsby
The Magic Castle
Greystone Mansion
Art of the Movie Poster - Dwight Cleveland
The Rich Life of James Goldstein
L.A. Art Show
Guadulesa
Art at MOCA
How to Succeed in Hollywood
How to Succeed in Everything
Top 10 Hottest Actresses
Archives
home 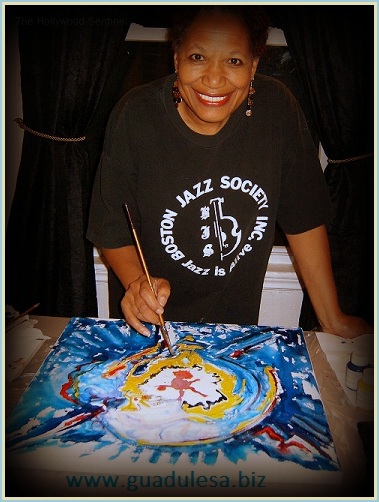 The visual artist is a Boston native and former resident of the Piano Factory. After studying, she began her art career in Los Angeles, California, where she began to exhibit her work and painted sets for the theatre, television and the film industry. Exhibitions at Ligoa Duncan Gallery in New York City led to her work being sent to Paris in 1981, where she won Le Prix de Peinture du Centenaire de Raymond Duncan at L'Academie des Duncan.

The academy was established by the husband of the artist, Raymond, and his sister, the famous dancer; Isadora Duncan. Proving she wins without nepotism, Guadulesa's work is also included in the Massachusetts collections of the Black Indian Inn, the Harriet Tubman Gallery, and The Cambridge Lawyers Guild. Further of her works are also be found in private collections throughout the United States, including Puerto Rico and St. Croix, as well as Israel and Spain.

From 1986 through 2003, Guadulesa was an active member of the arts community in Boston, where she headed arts programming at United South End Settlements. In 1991, she received a Drylongso Award from Community Change, Inc., and in 1992, Guadulesa was the recipient of an Individual Project Grant by the Massachusetts Cultural Council, a state agency funded by the National Endowment for the Arts. She was appointed to the Boston Cultural Council by Mayor Thomas M. Menino and served in that capacity for six years.

Guadulesa participated in interdisciplinary events with musicians, dancers and poets at numerous venues; including Mobius, the Gallery at the Piano Factory, Harriet Tubman Gallery and the Knitting Factory in NYC. In 2002, with a group of local artists, Guadulesa founded the Boston Metropolitan Arts Guild and opened Gallery G. After leading a bi-coastal life for four years, she returned to Los Angeles as a resident in 2003, and Gallery G was incorporated into the Black Indian Inn in Dorchester.

An Exclusive Interview With Guadulesa by The Hollywood Sentinel

The Hollywood Sentinel: For our readers who are not familiar with you, please tell us about you and what you do?

Guadulesa: I am a visual artist. I have become known for abstract or loosely figurative works of art, which reflect spontaneity, strong rhythm, texture and color blends. I enjoy working with music, particularly jazz. I sometimes paint in live performance with jazz musicians at galleries, clubs and other venues.

Hollywood Sentinel: When did you start doing this, and what training did you have?

Guadulesa: I began my studies in Boston, where I grew up. When I came to Los Angeles in the '70's, I continued my studies at Pasadena City College, from which I obtained an Associate of Arts Degree in Studio Arts. In 1979, Josine Ianco-Starrels, who was the Director of the Municipal Arts Gallery at Barnsdall Park, became interested in my work and arranged an introduction to Kanemitsu, a professor at Otis Art Institute. I had already seen his work, which I admired greatly, so I leaped at the chance. Kanemitsu became one of my important mentors. In the '90's I sought to work collaboratively and create with others as musicians do. I had returned to the East Coast and found a few musicians who had similar interests. Together we developed an interdisciplinary approach and performed live, utilizing music as a foundation and catalyst for visual art, dance and poetry. We performed at several venues in the Boston area and New York City.

Hollywood Sentinel: How did you know you wanted to be an artist and why?

Guadulesa: Art had been one of my favorite childhood pastimes, but academic studies took over, as I grew older. I pushed art into the background for about ten years. When I began to take art classes at PCC, I received such favorable feedback, I decided to take my talents seriously. I have not looked back. Visual art is my calling. 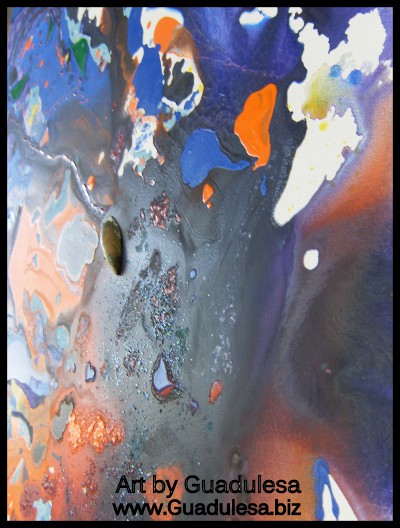 Hollywood Sentinel: What is your advice to aspiring artists?

Guadulesa: I would advise them to see as much work as they can - visit galleries and museums, look at art magazines, talk to artists. Try different styles. The advantage of formal study is that you are introduced to different techniques, and you have the opportunity to find out what feels right for you.

Hollywood Sentinel: Many kids get told that doing art is a nice hobby, but not a realistic career. What would you say to them when they get told this?

Guadulesa: I have to admit that finding a career in the arts can be very challenging. One has to be prepared to take the long road. Success rarely happens overnight, because there are so many variables. Even if it does seem to strike overnight, it does not always last. Success does not entirely depend on talent, but tenacity, dedication, single-mindedness. There are always people or circumstances that can deter you, but if you are truly inspired as an artist, nothing else quite satisfies. Having a sense of art as a business means that you have to follow sound business practices.

Hollywood Sentinel: Were you supported to pursue art as a child and young adult and if so how or how not?

Guadulesa: My talent was appreciated and supported. However, it did not even occur to me that I could support myself as an artist. When I renewed my interest in art, I began to understand marketing and promotion - and dedication - from my musician friends. I applied those principles to my art life.

Hollywood Sentinel: What is your goal as an artist?

Guadulesa: As I grow older, it has become more important that I support myself with my artwork. I have worked as an arts administrator and teacher. Now I want to expend my energy creating art. I just don't have as much time to spread around.

Hollywood Sentinel: Who are some of your influences and why?

Guadulesa: I have a love for color blends and subtlety. Mystery and nuance. Some of my early influences were Kanemitsu and Paul Jenkins, who had a similar approach to paint. I was also influenced by assemblage artist Betye Saar, who projected a sense of art as ritual. She became one of my true mentors.

Hollywood Sentinel: What motivates you as an artist? 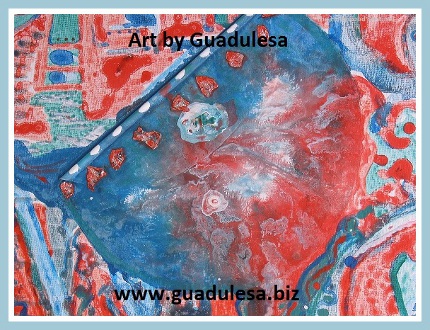 Guadulesa: I am drawn to the colors and patterns in Nature. I may hear a piece of music and feel inspired to create. I am self-motivated. If I do not create for a while, I begin to feel that my life is not complete. As with many artists, I need to allow that great energy to manifest. Otherwise it presses on me and pushes me, until I settle down to work.

Hollywood Sentinel: What are you working on now that readers should know about?

Guadulesa: I just returned from Boston, where I unveiled a new painting, in honor of a dear artist friend who passed away 4 1/2 years ago. I received rave reviews by art critics, collectors and artists alike. We were installed at the gallery for two days, where I painted live with musician friends - two of whom I painted with regularly when I lived there. We opened each evening to the public. Two rooms were filled with my works of art. I received two requests for interviews, which I will follow through on right away. 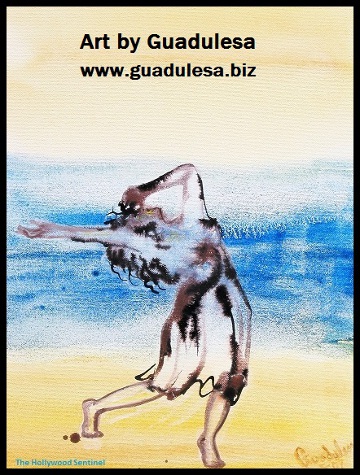 Hollywood Sentinel: How do you want to be remembered?

Guadulesa: I want to be remembered as a kind person, first of all. One who loves life and appreciates all the various elements that come together to shape my life. My art is the supreme testament to the creative forces and life-giving energy that we can all tap.

Hollywood Sentinel: It was nice talking with you Guadulesa, thank you.

For commission works or purchases of existing inventory, contact the studio of the artist at the above website, or e-mail: guadulesa222@yahoo.com