The Liberation of Susan Justice 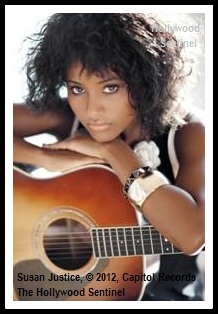 
Formerly known as Susan Cagle, Susan Justice is a beautiful young woman who grew up fast, plays guitar, and writes soulful songs she sings with a lovely voice. After busking (singing for cash on the streets and subways) across the country (which is how Jewel—who Susan reminds me of—started out during her earlier days), she later got picked up by Columbia Records who recognized her great talent. Since then, Susan has healed from abuse as a child, changed her last name to 'Justice,' which reflects her spirit and her fight, and signed with world renown Capitol Records.

Susan Justice co-wrote every song on her new record 'Eat Dirt' (Capitol Records / Kite Records) with songwriter and producer Toby Gad, who also produced the album. Toby Gad is renown for his work with Beyoncé, Kelly Clarkson, Fergie, and Alicia Keys, among many other music superstars. "Susan is a real artist who can do it all," Toby states. "She can simply pick up a guitar and command your attention. She moves you to tears of joy and somehow makes you want to stand up and cheer. I love her honesty, vulnerability, and inner beauty." And so do we.

This captivating, sweet, intelligent person is a powerful young artist who has deeply touched the heart and spirit of the growing number of fans fortunate enough to hear her work. After reading many of the comments about some of her videos, we discovered how many stated how the world should hear her work and how they thought she deserved greater exposure. We agree, and so with that, we bring you a rare, talented singer and songwriter that has a lot to say and a powerful way to say it. Meet Susan Justice.

An exclusive interview with Susan Justice by Bruce Edwin

Hollywood Sentinel- Bruce Edwin: You started at a young age. You started playing guitar at what age, seven? Is that right?

Susan Justice: Mmm-hmm, Yeah, at six or seven my Mom taught me how to play my first chords, and I kind of took it from there.

Susan Justice: I have to say the first verse was not a specific incident, but the entire song was basically biographical, so it's pretty true. And it's odd because someone said like, oh, this is a very interesting concept, but little do they know is—it's about my life you know, and growing up, my family was like part of an environment where we weren't really free to do whatever we wanted to do. We lived in Western society, but meanwhile there were some points where it was like you're living in some communist country. A restrictive environment, you know what I mean? And as a kid, I would sneak and read books, and sneak and listen to music...so that's what that song is pretty much about. And you know I'm not trying to tell kids to disobey their parents or run away or anything like that...

Susan Justice: While being sort of autobiographical about my life, it's also a metaphor for freedom, and pushing the envelope, and pushing your boundaries around you, and testing yourself against the world—testing your mettle against the world, and like you know, landing face first in the dirt—in the proverbial dirt—you know what I mean—and getting back up again. Because sometimes we just get tired, because it seems like the same things are happening over and over again, but people just also need to learn that that can make us stronger.

Hollywood Sentinel: I totally agree. I read that one of your mentors or persons you have looked up to—Oprah Winfrey—came out and admitted she was abused, and another songwriter I love has done the same thing—Sarah McLachlan, and many others—Tori Amos (...), Was that your scenario can you say then (of abuse), or was it more just an oppressive environment?

Susan Justice: No there was abuse there, I can't lie about it, but I think that—someone I really look up to was just saying the other day, said, most of the people that really made an impression or did anything in the world- that changed the world came from just crazy backgrounds, like you were saying—Oprah, you know what I mean, and like if you really read her story and her past and where she came from, you realize that it was horrible—her past, but you know I think that (...) in my case, a lot of the stuff that was done was religiously sanctioned which makes it so much more annoying—but however, in spite of all that, I really think that you know—included with all the traveling that I did as a kid, it sort of made me able to sympathize with other people who went through maybe similar situations, not necessarily the same environment, but similar situations in their life, and it made me sympathetic to that, and understanding of other people who went through those things, and gave me a broader view of the world.

Hollywood Sentinel: That's great, and I think that's a such a beautiful thing about your work and other artists that tap in to more personal things so you can help heal and help others heal through your work as an artist—that's great. Now, not to dwell on the lyrics of 'Eat Dirt,' but one other question about that—one line that intrigued me was your line about reading mystical texts or something of that sort. Was there a specific book you were reading when you wrote that or were thinking about that you can tell us about?

Susan Justice: Yeah, (...) it was so strict that any sort of mythology was—it was Christian based—so we were only allowed to read things that were the bible or teachings from the group that we were in. But what I was fascinated with was Greek mythology, and all of the different societies of their mystical teachings of Gnosticism (*1) or you know, Sufi teaching (*2). (...) Reading those things, I realized that all of these religions are pretty much the same. They are talking about the same thing which—once you realize that, it's hard to kind of go back to being an extremist in any one religion, you know? So I was either reading some South American authors like (...), Blavatsky (*3) , a lot of Russian mystics...

Susan Justice: but that didn't come till later, the stuff that I was singing about is the Greek mythology which is like as innocent as you can get.

Hollywood Sentinel: Right, that's really cool. (...) Would you consider the group you grew up in a cult? (The group referred to was formerly called Children of God, aka The Family, now called The Family International or TFI)

To be continued in the next issue.

(*1) Gnosticism: a term loosely defining a large number of sects before and after the rise of Christianity that believed that God and the world are one, and that to know the spirit and God, one has to transcend matter and be at one with spirit.

(*2) Sufism: Some mainstream scholars of Islam define Sufism as simply the name for the inner or esoteric dimension of Islam, while some other scholars claim that Sufism came before Islam.

(*3) Helena Petrovna Blavatsky co-founded, along with Colonel H. S. Olcott, The Theosophical Society in 1875, based on their writings, which entails believe in reincarnation, angelic guides, and a race of so-called super men of which Hitler used in his attempt to justify his nazi ideology and effort to try take over the world.