The Cult of Katniss

Katniss Eberdeen, the main character in the the world famous hit film The Hunger Games, is, like the rest of the film, cult-like in stature. A cult entails an undying devotion to a cause, to a person, or an ideal. It has a leader, and it is filled with members who get a sense of fulfillment by being a member. Observing fans of The Hunger Games, they have stated of the film, 'it has everything for everybody; danger, romance, it has it all' many have said. Others state, 'It is without a doubt the best movie of the year, and one of the best movies ever. It appeals to everyone; to all ages, to all races, to all genders.' And indeed it does. Political pundits on both sides of the fence—Democrat, Republican, and other groups—have used the film to reference their agenda. School teachers and professors have used the film as analogous to their political or social theories. Adults and children have traveled from around the country and even world to see the film premiere in America and beyond, with a marketing strategy by the studio for the film nothing short of genius.

If there was ever a film that tapped in to the psyche of not only young America—but to be sure—young adults and children the world over—it is The Hunger Games. Perhaps no film of our time since Avatar, Matrix, and Star Wars has had created around it such a frenzy of fandom of all ages, and such a power of philosophical debate that springs from—yet goes beyond the film itself. Sure there has been Twilight and Harry Potter, but The Hunger Games has reached further—into wider adult audiences and a political landscape of debate. It has of today's date made well over half a billion dollars world wide, and costing reportedly under eighty million to make. And yet why?

While an excellent film on many accounts, The Hunger Games is not—despite it's marketing or it's market—for young children...or at least it shouldn't be. Some social critics argue that cinema, art, and mass pop culture is merely a reflection of what is going on in society. Others argue that film and pop culture comes first, and shapes, creates, and influences society. In reality, it is actually both. Society influences the artist- to a greater or smaller degree, depending on how in touch that artist is with society, and the artist—if successful, influences society—for better or for worse to a greater or lesser degree.

To blame society alone on the violence of The Hunger Games and it's attraction by children is not correct. Studios and filmmakers alone are ultimately responsible for what they release and market to children; whether it be motion picture, T.V., video games, books or beyond. So, ultimately, it is the artist that has a responsibility to society. Some artists' aim is to shock, attack, or degrade culture, while others aim to inspire it and lift it up. The Hunger Games walks the fine line between shock and awe, and finding the light at the end of a very long, dark, and dangerous tunnel—yet the light is there—after a lot of murders.

Some critics have claimed that a book (of which its English translation is called 'Battle Royale,'a Japanese novel written by Koushun Takami, that was completed in 1996 and published in 1999) was the real inspiration for the author of The Hunger Games. Yet the author claims to have never heard of the book until after she wrote hers. As ideas seem to float throughout the universe until artists or others catch them and make them material form, this is probably true. The Japanese story tells of school children who are forced to fight each other to the death. The author of The Hunger Games states that the book was inspired by channel surfing one night, and seeing reality T.V. on the screen, as well as the nonsense of war in Iraq which partly inspired the story.

Leaving the film The Hunger Games after its first viewing is somewhat akin to having just gotten off of a roller coaster or leaving a horror film. Why did we do it? It's crazy, dangerous, shakes us up, may even make us feel sick for a minute or more—but it's exhilarating. After a little bit of wobbliness, it may make us feel even more alive—it's the thrill and the rush of it all. Such is The Hunger Games, and despite its ultra-violent society—it just may give us a worthwhile debate far more important than all its brilliant hype. 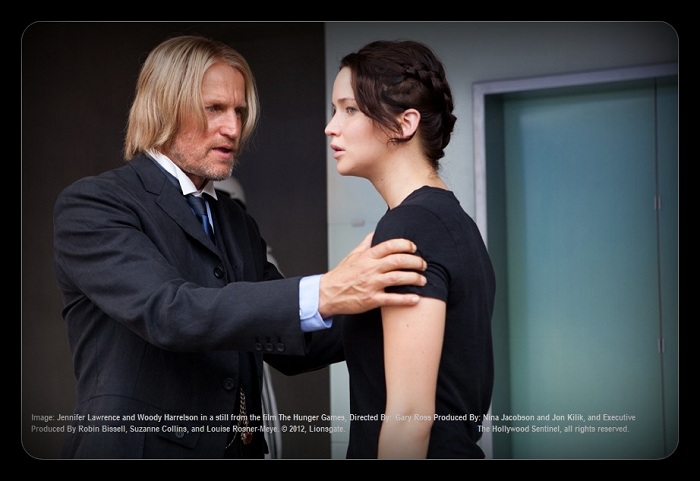