A Fine Frenzy's Alison Sudol - Inspired by the Spirit 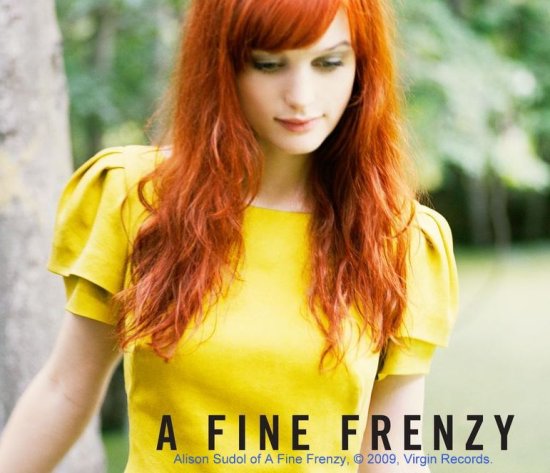 An Exclusive Interview by Bruce Edwin

Alison Sudol's music debut , 'One Cell In the Sea,' reached number one on the charts, putting her on the map around the world thanks to her sultry, romantic ballad 'Almost Lover.' After 'One Cell in the Sea,' Alison Sudol followed with the album 'Bomb in a Birdcage,' which hit Number One Top Pop Album, and hit the top of the digital charts. Wasting no time following up their acclaimed second album, A Fine Frenzy released a six-song EP 'Oh Blue Christmas' which like the bands other work, is a must for any music collection.

Bruce Edwin: Do you believe in any so called spiritual inspiration, or element beyond the physical realm that inspires you?

Alison Sudol: Yeah, I'm just a girl, you know, I'm a girl that's totally flawed and trying to figure things out, but every now and then I'm able to just open up the door to somewhere else that I can just pull things out of, and I don't know where it comes from, I don't know when it's going to come, I don't know when it's going to go away, but it always comes at some point, it's just, I couldn't take credit for it, I don't feel like its mine. I just feel like an interpreter or something, it’s my job to figure out how to put all of that in to words.

Bruce Edwin: Wow, yeah, that's amazing, that's really cool, is there a process you typically go through to get your self in that mind-set of receptivity? Or you do kind of just wait for it to happen?

Alison Sudol: Well, I think I know when I'm not on the right track, because I can't write, because I can't find what I need to write about, its very difficult to find the words, and so I just try to pay attention and guide my life in a way to where I’m making decisions that are not inhibiting that extra channel from being accessed, and then I just do it, you know, its about sitting at the piano, sitting at the guitar, for hours, trying to find it. And some times it just doesn't come, and other times I'll write like three, at least the beginning of like three or four songs in a night, and it’s like woah! woah! Alright! It's just like a jamboree, its so exciting when that happens...

Bruce Edwin: Yeah... I read you are working on a children’s story, is that accurate?

Bruce Edwin: Is that going to be a screenplay or a novel?

Bruce Edwin: That's great, I loved that book too when I was a child.

Bruce Edwin: Pardon me, you've what?

Bruce Edwin: A smidge! Ha, that's great, O.K., Is that something you'd like to do more of, to work more in film aside from what you just mentioned?

Alison Sudol: Well I would but I don't think about it too much, I just like being in the creative environment, and there are movies I’ve seen, where I’m like, Oh! I want to be in that, so if there were something that came up that was like really interesting and beautiful and quirky and probably funny, you know, like a 'Garden State', or 'You and Me and Everyone We Know,' or like 'Life Aquatic,' that I could actually add to, and not mess it up by being an actor, then I would love to.

She couldn't mess it up. She's too real.

The Hollywood Sentinel / Bruce Edwin, ©2009, All rights reserved. No part of this interview may be reproduced in whole or in part without written permission from the publisher.