News from the Academy

The Academy of Motion Arts and Sciences, which is creator of the biggest and most prestigious awards show in the world; The Academy Awards, has been more busy than usual lately, announcing the new creation of the exciting, upcoming Academy Museum of Motion Pictures (pictured here). They have also recently announced their new logo (also pictured here), which replaces the earlier logo of the image of Oscar with the spotlight from behind him, to now having the spotlight shine from the top, in the shape of an "A," in order to place equal emphasis on the Academy, as well as on The Oscars.

Christina Kounelias, Chief Marketing Officer of The Academy states, "Two years ago we began a thoughtful internal dialogue regarding the visual identity of the Academy, and found a need for a new design system that reflects the creativity of our organization. We set out to build something that accurately reflects our community of artists, their diverse talents, and the creative process they employ to bring disparate ideas together into a single vision. "Ms. Kounelias continues, "The new logo spotlights the Oscar from above – creating a triangular shape and uniting the "A" of the Academy with our iconic statuette. This design gives the Academy a presence in its own logo for the first time and underscores our efforts to support creative arts and sciences year-round." 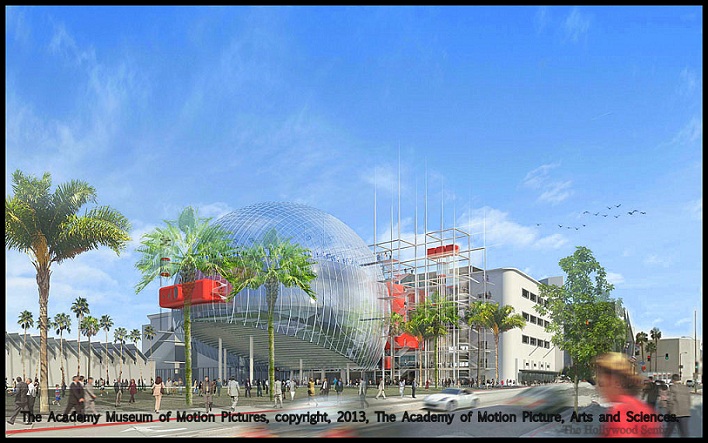 The video above details some exciting details of the upcoming new Academy Museum of Motion Pictures, which is scheduled to open in 2017. The cool looking building will connect to the old May Department store which will be turned into this grand museum, that will sit next to one of our other favorites, LACMA (The Los Angeles County Museum of Art). The great image of the talented, beautiful, and forever famous icon Marilyn Monroe on the front page of this issue of The Hollywood Sentinel is from The Academy of Motion Picture Arts and Sciences. This will be one of the many great images available for the public to see on view in their original version, large, up close, and personal at the upcoming Academy Museum of Motion Pictures.


Letters to the Editor

I am a big fan of your work. My name is Christopher Tyler Knipp. I am __ yrs old. I live in a very rural small town in Grayson, KY. I have always dreamed of being famous and working in Hollywood. I have had a lot of obstacles I am overcoming. For example I had acne from an early age which destroyed not only my complexion but my self worth, my weight I currently weigh in at __ lbs and the biggest of all is at age 20 I was disowned from my family for being gay and coming out. With no support system no confidence and no real direction I feel like I have really missed my opportunity to live out my dreams. My friends are very supportive and I know that I could easily become the next hilarious film star. If it was not for my dreams of Hollywood I probably would not even be here today and I am beyond ready to make a change remove myself from the negativity and prejudice around me and to just feel like I can start living again. I am trying to save up as much as I can to make the move to LA. I just wanted to know if you had any pointers for me once and if I ever make it there.

Thank you for your time,

Hi Christopher, first of all, well done on surviving the invalidation and suppression you have endured. You now know that you are a survivor, which is one of the key qualities to success in any field, including Hollywood. Congratulations also on finding a good group of friends to help give you the emotional support you need. Your families hatred against one being gay is a learned behavior. The nature of a human being is love, and hate is indoctrinated, so the hatred your family feels is something they were wrongly taught. Hate is also often based on fear, misunderstanding, and ignorance. Keep sending your haters, including your family, love, and know and remember that they are merely victims of their own minds and the wrong, hateful thinking they were fed. Hopefully one day they will wake up to reality that they have a son who they should have a relationship with no matter what your orientation.

You asked for pointers 'if' you ever make it here to Hollywood. First of all;

1, You have to get the word 'if' out of your vocabulary. If you want it enough, just resolve that you will be here in Hollywood, commit to it, and let nothing stand in your way, no matter what. There is no point moving here to Hollywood until you feel and know you belong here, and until you believe that you deserve to follow your dreams- which you do deserve. Get and maintain a positive mental attitude, which is the key to all success. Read the biographies of stars you admire to see how they succeeded. Read self help books and listen to self help programs including self help videos online- daily.

2, Have as much money saved up before you move here, so you don't struggle. Resolve to never beg or borrow, and don't ever go in to debt for your dream. Plan wisely. Follow the wise financial plan of A, pay yourself first by saving at least 10 percent of everything you make that you never touch, and invest it wisely, B, pay all bills on time, and do not live above your means. As a general rule, avoid credit or anything with future committment. Have six months of living expenses saved for financial emergency.

3, Make a friend online that you can room-mate with, or who will show you around, or both when you get out here. Be sure to know them well before you live with them. The better friends you can make here before you move here, the wiser, to have a support team. Joining a group before you move here that you can have as a support base would be a good idea too. Some examples are an activist group, a church, spiritual, or community betterment group, or similar. You can also do some volunteer work, both to help others and to meet good people.

4, Avoid drugs and avoid any one who does them. Also stay away from criminals and pornographers. This may seem obvious, but I have seen and dropped many who have gone down these dead end, and often deadly paths. Never compromise your values and integrity for any amount of money or fame in the world. Money and fame comes and goes. Your integrity and values, which effect your soul, are eternal.

5, Apartment finders has the monopoly on rental services. You can use them, or try Craig's List. Or, you can simply walk around when you get here and write down numbers of signs from locations you like.

6, Learn the bad areas of the city and avoid them. Take a self defense class, so you can take defend yourself in case of an emergency.

7, Get a good map such as a Thomas Guide and start studying it and memorizing some of the streets and freeways before you get out here.

8, Sign up for Central Casting, and do some background work, and work on getting all of your three SAG vouchers. Sign up for a legit calling service, to help you get booked. Do some audience work, which pays around minimum wage, but will also get you on set. Pick up Back Stage West and do some indie projects there to build your resume, and do some plays for the experience. Read the trades.

9, You mentioned you want to do comedy, so you should definitely hang out at the comedy clubs, and also go check out The Groundlings and Second City. Go check out The Acting Center to see my client Jim Meskimen and his wife, who are both hugely talented and funny, and may give you some free advice if you ask them nicely. Make some comedy sketch videos and upload them on You Tube and then promote them.

10, Get and have a good, safe, reliable car. You will be glad you did. Always carry your working smart phone on you, charged. Don't give the bird to someone here if they cut you off. In case you have not heard, some people in L.A. 'are' crazy.

11, Consider a waitstaff job at an upscale restaurant where stars and star producer and directors go. This will get you in touch with the Hollywood crowd, get you paid, and usually allow you some flexibility that you need as an actor. Catering companies can also serve this function, working as a caterer for various temp jobs at the big country clubs and private, VIP clubs.

12, There is tons more I could share with you Christopher, but this is some of the main things for you here now. Be sure to read 'all' of the back issues of my article How to Succeed In Hollywood in the Archives sections of The Hollywood Sentinel here at the left of this page at the Table of Contents. I hope this has helped you. If you have any more specific questions, or if any of our other readers have any questions here, you are all invited to contact me on the front page of The Hollywood Sentinel. Lastly Christopher, when I read your stated problems of your acne and weight, I pictured a guy who would not look very attractive for Hollywood. However, the photo of yourself you sent here shows that you have a very nice look! Keep your hope alive, you can do whatever it is you set your mind to do! I wish you the very best.

(Disclaimer: The office of Bruce Edwin, Starpower Management, The Hollywood Sentinel and affiliates assume no liability, make no claim, warranty, endorsement, or guarantees, and do not infer any offer of any job, casting, employment or similar with the advice herein).


This content is ©2013, Bruce Edwin, The Hollywood Sentinel, all rights reserved.