By The Hollywood Sentinel

Singer and songwriter Moira Cue has released here her brand new music video for her haunting new single, "Make you Happy," produced by Ralph Rieckermann, formerly of The Scorpions, and directed by Billy Boatman, photographer and videographer for Mariah Carey. The video may be seen in its entirety, here above.

A child prodigy, who had created hundreds of masterful, large scale paintings by the time she was a mere 17 years of age, Moira Cue is a multi-media artist whose boundless creativity and talent the word "genius" aptly applies to. A former graduate student of The School of the Art Institute of Chicago, the award winning artist has work in the collections of buyers and dealers around the world. Through her management firm Starpower Management, who represents master works of fine art, one of Moira's painting's is also in the collection of pop superstar Madonna. When she is not running or training for marathons, singing at church, or feeding the homeless, the influential, avant-garde artist spends her professional time acting, singing, songwriting, and writing novels.

A gifted songwriter, America's Got Talent called her song "California" an "infectious hit that they played all day, and couldn't get out of their heads." The office of Clive Davis (J Records, Arista Records, who managed Whitney Houston and Janis Joplin) called Moira "very talented" and stated the song was "very catchy." 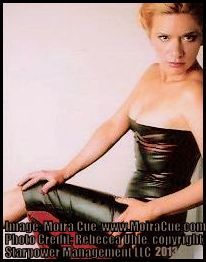 Michael Jackson's guitarist on hits "Billie Jean," "Thriller," and "Beat It;" David Williams, called Moira Cue's voice "sexy and unique," stating "he hasn't heard anything else like it," and that "he had played with the biggest stars in the world, and Moira has what it takes just like the rest of them." Former Michael Jackson publicist, who also has provided council for three U.S. Presidents, and New York Times best selling author; Michael Levine, saw Moira perform the song "Make You Happy" live at one of Starpower Management's VIP Halloween parties. Of the singer, and the performance of this song, Michael Levine stated, "...It brought tears to my eyes."

Starpower Management CEO Bruce Edwin, who has been a working professional in the music industry for over two decades states, "Moira Cue is one of the greatest songwriters I have ever met. She is an extraordinary and brilliant songwriter, with a lovely voice. She is also one of the most entertaining performers. She bears her soul on stage."

"Make You Happy" was written by Moira Cue regarding a former loved one, who committed suicide after a long battle with alcoholism and depression. The tragic, haunting, and beautiful song is a tribute to the spirit of the departed, and also serves as a method of healing. (Creating) the video provided a final sense of closure for the artist regarding her loss. Subnormal Magazine has likened the song to the style of Morrissey, with tragic words, yet melodies of hope. The publication names the single as "one of the saddest songs in the world."

Written and performed by Moira Cue, the song "Make You Happy" includes guitar played by Mark Woolley, and subdued bass by former Scorpions bassist Ralph Rieckermann. The song was produced by the bassist at Rieckermann Studios in Hollywood, California. The video was shot by cinematographer and director Billy Boatman, who is personal photographer and videographer to Mariah Carey, and was also partly shot and directed by Bruce Edwin, who produced the video. Editing was done by Moira Cue Multimedia with assistance from Corryn Cue.

Moira Cue is currently working on the new tracks for her next album. The next video to her single "California" will be released later in 2014.


This story is ©2013, The Hollywood Sentinel, Starpower Management, all world rights reserved.