TV's Laugh In, (1977) Happy Days, (1978) Mork and Mindy, (for five years starting in 1978) The Crazy Ones, (2014), motion pictures Good Will Hunting, Mrs. Doubtfire, The World According to Garp, Popeye, Cadillac Man, The Fisher King, Birdcage, voice over work for films including Hook and Aladdin, and further starring in other legendary films as our favorites; Dead Poets Society, and the hilarious and legendary Good Morning Vietnam, and so many more...These are just a few of the great titles that come to mind when reflecting on the work of the modern legend Robin Williams. Brilliant, hilarious, genuine, talented beyond compare, and a delight to watch whether in an interview on a talk show, doing stand up, on T.V., or on the big screen, Robin Williams helped raise generations of T.V. watchers and film goers. No one on the planet did not like Robin Williams, he was loved by all generations, all races, both sexes, and all types around the planet. When one thought of the name Robin Williams, one would think funny, and would usually get a warm smile on their face. He brought happiness, warmth, laughter, and delight to millions for decades, and was regarded justifiably as one the modern greats of Hollywood.

Robin Williams was the pinnacle by which other comedians were measured. And, to all those who personally knew him, they all repeated the same sentiments, of how he was kind, thoughtful, caring, polite, generous, helpful, compassionate, and loving to all he encountered, which is exactly what we would expect from the way he made us— the audience—feel. It is with these words that we feel sadness over Robin Williams untimely departure. We wish his family and loved ones the greatest of compassion, and we must all work to find a solution to help those that felt like he did, so that that hopefully they can find a way to break through from their feelings of despair, no matter what their physical or mental troubles. Robin Williams was one of the greatest and most talented stars of our time, and the funniest. He will forever be remembered and honored. 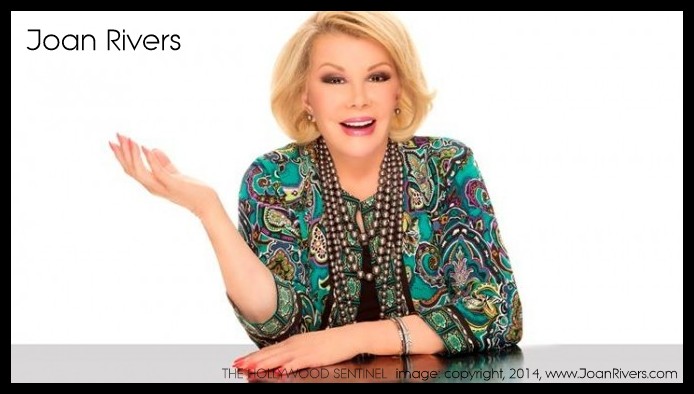 Joan Rivers was an amazing woman and a great friend. Her energy and talent were boundless. She will be greatly missed. - Donald Trump

​Joan Rivers was, aside from her great wit and humor, a brave, fearless woman who had major guts and integrity. Screen and stage actor, producer, entrepreneur, author, comic, designer, spokesperson, talk show host, ground breaker, and much more, Joan Rivers was an icon that will be forever remembered. - The Hollywood Sentinel


Named by The Hollywood Sentinel as "One of the most stunningly beautiful and talented stars of all time," the iconic Lauren Bacall was a legend. From her early work in lauded films including Key Largo, The Big Sleep, How to Mary A Millionaire, and To Have and Have Not, among more, during the 1940's and 50's, Lauren Bacall went on to star in Sex and the Single Girl (1964), Murder on the Orient Express (1974) and a great deal of work in television including The Rockford Files (1979), Chicago Hope (1998), the feature based on Steven Kings novel, Misery (1990), Dogville (2003), and voice work on the hit show Family Guy (2014) among more.


Standing at five feet eight and half inches tall, Lauren Bacall's sultry voice, look, and mastery of her craft, and famous roles and lines will forever make her remembered and praised as one of Hollywood's greatest leading ladies. She not long ago stated that she had been lucky, stating, "I had one great marriage, I have three great children and four grandchildren. I am still alive. I still can function. I still can work.” And according to The New York Times, she stated in 1996, “You just learn to cope with whatever you have to cope with. I spent my childhood in New York, riding on subways and buses. And you know what you learn if you’re a New Yorker? The world doesn’t owe you a damn thing." And while that is true, the world did pay handsomely to Lauren Bacall. Actress, former studio founder, and icon, she will forever be cherished for the great woman that she was—one of Hollywood's greatest, and known as such not only in Hollywood—the opinion leader of the world, but throughout the world at large. Lauren Bacall cast her own shadow, and she was legendary.

Spring has brought major changes for us here at The Hollywood Sentinel, and we have grown more than ever. Here are a few reminders that were were forced to remember along the way this year, that we want to share with you;

1, Just because someone is a part of a group that you trust, or connected to someone you trust, does not make them trustworthy or a good person. Be a good judge of character, and base your goals on long term decisions for the greater good, not merely short term gain.

2, If you see warning signs, don't write off not dealing with a person as as 'the benefit of the doubt' and still deal with them, rather, heed the warning signs, and operate on your instinct. The human mind logically and naturally, usually makes the right conclusion about things. When you wrongly get conditioned into violating your instincts, that is when mistakes happen.

3, After God (if you believe), and you yourself, your friends and family are the most valuable and precious form of existence—at least they should be. Treat them like gold, and show thanks, honor, and appreciation for them.

4, As the book says, "Don't sweat the small stuff, and it's all small stuff!" When something goes wrong in your life, anything that does not go your way, is it really worth getting mad about? Most doctors and scientists now confirm that anger is a leading cause of many health problems. Is letting another person or situation not going how you want really worth risk to your life and peace? The answer is no, of course it is not. Whatever your job or position in life, controlling your self, your mind, your temper, and your state of being is the number one first goal you should strive to achieve and master. The days of the hot-headed actor, casting director, director, producer or agent who screams and throws phones or fits are over—at least they should be. We live in a new age where we 'know better.' Treat people how you yourself want to be treated, master your emotions, and then, you will master your life and the outcome you want to create.

5, Be quick to apologize and slow to anger. This is a tough one. In a town like Hollywood, filled with ego galore, it is usually the other way around. Many are quick to anger and slow to apologize—if ever. I admit, I used to be one of them. However, I assure you from experience that it feels much better to forgive or at least 'let it go' and move on, than to argue or hold on to bad energy. Typing or saying two little words, "I'm sorry," will not kill you, and instead, will bring you and the other person some relief. And you will find, it just might even salvage a business deal after you move beyond ego and into an agreement that proves more valuable than anything you could have imagined. Try it, it won't make you weak, on the contrary, it takes a person of strength to move beyond ego. A child can whine and cry or pout or call names. I am not invalidating children, but my point is, many adults do this and never grow up from this immaturity. It takes a mature adult, an evolved human being to stay cool, relax, and when needed, say the magic words that can re-build broken bridges. "I'm sorry."

In that spirit, I am truly sorry to any model, actor, and yes—even those flaky bands (lol) that I upset or hurt the feelings of with rejection, a big ego, or negative attitude back. Maybe that doesn't mean anything to some of you that dealt with me, but if it does, then these sincere words served their purpose. I even invite you to call me for any free advice you may want—for what that's worth (And yes, its worth a lot.. Laughs).

I hope some or all of this advice has been helpful to you reading this. The wisest and most successful people in life learn and grow every day. And as we often find; anyone can be our teacher if we learn a valuable lesson.

I want to now here give sincere thanks to some people who have helped build us up, while some others tried to drag us down—but did not succeed. I am thankful to the spiritual power and creator of this and all universes, also for my family, for Moira, for Carl, for Lake Avenue Church for being a true, living example of what the spiritual teacher Jesus Christ taught (to care for others and help others), thanks for my clients, for our new client Dr. David Bernhard and Pro Boxing, for Sherri Murphy, and for anyone else who has trust and faith in us, and for all who operate with honesty and integrity. Thank you. Summer is now past, and we are hopefully a season wiser. The Hollywood Sentinel will be gradually changing in many great new ways throughout the remainder of this year. As always, we encourage you to contact us on this page with any comments or suggestions. Thank you for reading, and may your summer and the rest of your year be filled with happiness and success in every good way you desire.