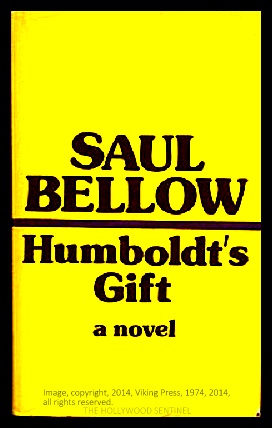 Art and literature editor of The Hollywood Sentinel, Moira Cue is reviewing; in no particular order, every Pulitzers Prize Winning Novel ever written. An award winning artist, Moira was an undergraduate and graduate student at The School of the Art Institute of Chicago.

Saul Bellow's Huboldt's Gift was published in 1975 and won the Pulitzer Prize for fiction in 1976. The narrator of the story, Charlie Citrine, is modeled, like many of Bellow's protagonists, on his own character. Autobiographical similarities include a mother who died when he was young, a childhood illness, success in the high brow literary world, graduate study at the University of Wisconsin, Madison, and difficulties with women (Saul Bellow was married five times, and reportedly a vocal opponent of feminism.)

Charlie Citrine is a Chicago resident in his mid-fifties, who epitomizes the term “over-thinking.” Even when faced with the probability of immediate arrest and detention over a case of mistaken identity, Citrine is too busy pontificating on sociological generalizations (“Misanthropes often practice psychiatry. The shy become performers. Natural thieves look for positions of trust.” ) and mentally defending his newest obsession, Anthroposophy (an occult philosophy based on the teachings of Rudolph Steiner, who also started the biodynamic farming) from Kafka, to react in real time to an immediate threat.

But Anthroposophy is a minor obsession. Citrine's two major obsessions are a curvaceous, decades-younger mistress named Renata, who is bleeding him dry financially, and, secondly, and more importantly, the ghost of his former mentor. Charlie Citrine was once the protégé of Von Humbolt Fleisher, who died broke and alone after his manic-depression, paranoia, alcohol and pharmaceutical drug abuse, along with evaporated funding for an endowed chair at Princeton, pushed him over the edge, resulting in forced hospitalization and electroshock at the notorious Bellevue psychiatric ward in New York City.

Aside from mental logorrhea, Charlie's other obvious flaws include narcissism, a sex-love addiction, and cowardice. All of these flaws are reinforced by his social stature. His reputation as a 'great man' precedes him, and gives him a Teflon-like protection from the consequences of his indulgences and cruelty. In his early days, when he is an unknown, he willingly plays second-fiddle to Humbolt, turning a blind eye to Humbolt's abuse of Kathleen, his wife. (“She had to ask permission to go to the bathroom,” Citrine observes, neutrally, weeks after Humbolt has physically assaulted Kathleen at a party, while under the delusion that during a time when she had disappeared, she was held captive as a sex slave by the Rockefeller clan.) After Kathleen's escape, Humbolt goes mad, and squanders his Guggenheim money on a private eye who nourishes Humbolt's delusions with squalid tales of sexually promiscuous liaisons between Kathleen and multiple others. This time period coincides with the Broadway production of one of Charlie's plays. Citrine drops Humbolt, who attacks him venomously at every opportunity.

But the retelling of Humbolt's fall and Charlie's ascension doesn't happen in real time. It is nothing but a memory, the most painful of which is the last time Charlie saw Humbolt, and was so uncomfortable with the once-great poet's physical and financial deterioration that he not only fled the immediate vicinity, but truncated his trip to New York and retreated back to Chicago.

In real-time, Charlie is adrift. Content to rest on his laurels, he hasn't written anything in ages. He is so detached from reality that every attempt to connect with humanity leads to some sort of exploitation, which instead of alarming him to his own defense, amuses him. His ex-wife, Denise, is taking every penny he hasn't spent on Renata. Every time he acquiesces to her financial demands, she asks for more money. A card game with “regular people” meant to bring him closer to his own humanity, instead leaves him target of a lowlife criminal, Ronald Cantabile, who begins a cycle of psychological threats and physical stalking. Against the backdrop of recollections of Humbolt and observations of his own downward spiral, the narrator explores some important themes in American society. These thematic explorations on the role of the artist, success and money are what I value most in this novel. Finally, Citrine's comments on love teach us as much about what love is, as what love isn't.

Because these observations are made in a direct, conversational style, the best make great quotations. I've selected a few of my favorite here below.

On Being an American:

“Thaxter was a real American in that, like Walt Whitman, he offered himself as an archetype—“What I assume you will assume.”

“People in transition often develop an interest in the movies. Either that or they begin to talk about going back to school for a degree. There must be twenty million Americans who dream of returning to college.”

“There's almost nothing personal in success. Success is always money's own success.”

On the Role of the Artist:

“People rich in abilities, in sexual feeling, rich in mind and in invention—all the highly gifted see themselves shunted for decades onto dull sidings, banished exiled nailed up in chicken coops.”

“The country is proud of its dead poets. It takes terrific satisfaction in the poets' testimony that the USA is too tough, too big, too rugged, that American reality is overpowering. … So poets are loved, but loved because they just can't make it here. They exist to light up the enormity of the awful tangle and justify the cynicism of those who say, If I were not such a corrupt, unfeeling bastard, creep, thief, and vulture, I couldn't get through this either. Look at these good and tender and soft men, the best of us. They succumbed, poor loonies.”

As for the lawyers and the shrinkers, they were delighted with him not because he represented the real world, but because he was a poet. He didn't pay—he threw the bills out. But these people, curious about genius … were hungry for culture. They listened with joy as he told his tale of unhappiness and persecution.

“I was still at the primer level in my understanding of money. I didn't know that there were many people, persistent ingenious passionate people, to whom it was perfectly obvious that they should have all your money.”

“Walpole said it was natural for free men to think about money. Why? Because money is freedom, that's why.” (-Huboldt)

“When you get money you go through a metamorphosis. And you have to contend with terrific powers inside and out.”

On Sex and Love:

During the course of the novel, the words “I love you,” are spoken repeatedly to Citrine not by female lovers, but long-term platonic male friendships, who he spoke well of. Regarding female infatuations, addictive love, Citrine says,

“No doubt she was a dangerous person but I would never be greatly interested in any woman incapable of harm, in any woman who didn't threaten me with a loss.”

Because Denise and Renata are caricatured as intellectually inferior, and emotionally less than noble, the reader winds up, a bit reluctantly perhaps, rooting for Charlie Citrine. I don't want to spoil the ending, so I'll only say that unexpectedly, from beyond the grave, Humbolt's gift to Charlie Citrine has the power to redeem them both.

This story is © 2014, The Hollywood Sentinel and Moira Cue, all rights reserved.