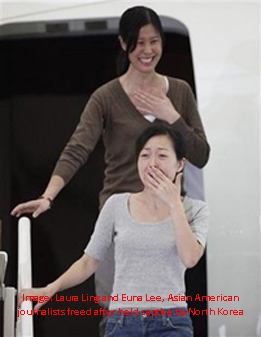 North Korea’s communist dictator Kim Jong il has been in the world news a lot this year, for test firing nuclear warhead missiles against the requests of much of the world, for threatening to bomb South Korea and the United States, and, recently, when it was discovered that the security invasion that hacked in to the FBI’s computer system was most likely done by, you guessed it, North Korea. But as even all of these insanities didn’t seem enough to wake up much of the world, it took the kidnapping of two young American journalists by North Korea several months ago to jolt many in to the realization that North Korea’s government needs dealt with.

it is estimated that nearly 200,000 or more political prisoners may be held in North Korea’s six labor camps. That means, thousands upon thousands of people are being enslaved for merely speaking out against the tyrannical system they are forced to live under. Hundreds of thousands of other slave laborers are thought to have perished inside the mountain camps of North Korea.

David Hawk, senior adviser for the U.S. Committee for Human Rights in North Korea, said prisoners in the country's forced-labor camps work up to 15 hours a day and up to 29 days a month. They subsist primarily on corn and salt and are under constant threat of being executed. Thanks to the actions of former President Bill Clinton, Al Gore, and others through political pressure in The United States, these two brave young journalists, Laura and Euna were freed last month, after over 100 days of confinement. We share with you here an abridged letter Laura wrote to world after their release:

While in detention in North Korea, isolated and scared, one of the things that gave me strength and sustained my faith was hearing about the groundswell of support for Euna and me. You were a part of this incredible movement and for that I will be forever thankful. In times of extreme darkness and depression, I thought of all of the people, united together, sending us messages of love and hope. I envisioned the light of the candles at the vigils and it brightened my soul.

I would not be here today, home and free, re-united with my family (my sister is actually asleep on the couch right by my side), if not for the support from so many extraordinary people. Thank you all from the bottom of my heart. Words cannot adequately express my profound gratitude.

I’d like to share with you an entry from my journal that I kept during my time in captivity:

“I’ve been so overwhelmed and touched by the outpouring of support from so many people. Loved ones, friends, people I haven’t been in contact with in ages, and even total strangers. It makes you have faith in humanity. I hope that I would be as good of a friend or human to someone else in a similar situation.”

Euna and I are two of the lucky ones whose story of captivity resulted in a happy ending. But there are so many journalists imprisoned around the world whose fate is still undecided. It is my sincere hope that the energy ignited around bringing us home will be harnessed into raising awareness around these fellow journalists and their struggle for freedom.

With all my love and gratitude,