Treasures of the Maya Spirit

The Los Angeles Jewelry & Antique Show will present a rare opportunity to view a selection of exceptional artworks slated for the future Museo Maya de America in Guatemala City. Treasures of the Maya Spirit will feature more than 200 extraordinary examples of Mayan art from the Pre-Classic period of Maya civilization (250 BC - 900 AD) through early part of twentieth-century and several contemporary prize-winning works of art from the Guatemalan Biennale at the Los Angeles Convention Center from January 15-19, 2014. Treasures of the Maya Spirit focuses on the art and civilization of the Maya people.

Initially established during the Pre-Classic period (c. 2000 BC to AD 250), the Maya nation reached its pinnacle during the Late Classic period (c. 600 AD to 900 AD), and continued through the Post-Classic period (900-1500AD) up until the arrival of the Spaniards. Spanning a geographic range including northern Mexico, Guatemala, Belize as well as parts of Honduras and El Salvador, the Maya civilization were known for advanced concepts of written language, the arts, mathematics and architecture as well as its calendar and astronomical systems.

The treasures on display will include a nine-foot long stucco sculpture depicting a Crouching Masked Jaguar Dancer from Guatemala’s early classic period (ca. 300 AD-600AD). On view publicly for the first time ever, this figure has been touted as one of the most important Mayan archaeological finds in recent decades. An entirely unique example of craftsmanship and artistry, the Jaguar figure is believed to include references to Mayan cosmology. The sculpture has been likened in importance to Mayan scholarship as equivalent to the importance of King Tut’s Golden Mask to Egyptology. The Crouching Masked Jaguar Dancer is the subject of intense academic research, some of the results of which might be included in the exhibition.

Among the Pre-Columbian artifacts on display will be a remarkable limestone panel. Originally, part of a wall, the inscription recounts a dynastic tale spanning from the year 652 AD to 799 AD, when the panel was commissioned by the ruler Tajchanahk, the “Torch-Sky-Turtle." The text describes his ascension to the throne and his pilgrimage to the sea, among other rituals. Much like the Egyptian hieroglyphs that noted the travels of Queen Hatshepsut to the Land to Punt, the Cancuen Panel details the accession to the throne of a Mayan ruler from Cancuen under the auspices of Yuknoom Ch’en of Calakmul, and his following pilgrimage to the sea. Scholars believe that the path noted in the panel may refer to one of two modern routes. While the locations written in the panels have long been lost, the piece is one of the prime examples of the Mayan language. It also illustrates ancient trade routes and describes a mythological and cosmological journey of the King.

The Maya had a profound understanding of their world. Rich in natural resources, they used what was available from their immediate surroundings and traded extensively with other groups benefiting from a wide diversity of materials. Among the available materials used, jade, which was highly prized for its hardness and beauty, was traded and used to make symbolic objects, decorative adornments, and tools. Stucco was frequently used in sculptures and buildings to soften edges, decorate, and add color. Monuments were honed from basalt and limestone. Alabaster, praised for its translucent properties, was used by the Maya to carve delicate bowls and funerary pieces.

A fine selection of Pre-Columbian Ceramics will also be on view. Produced using the traditional coil method favored by the Maya, the pieces feature richly painted scenes depicting ritual and spiritual life. One ceramic highlight, Chocolate Drinking Vessel, with the Hero Twins, features two characters identified as Hero Twins holding ritual paraphernalia. One of the twins, Hun Ahaw, is distinguished by the spot marks on his shoulders and is holding objects in an offering position. The other character, which could be Yaxbahlam, is holding what could be a water lily. The writing on the vessel indicate that it is a drinking vase for cocoa. The vessel is dedicated to the last ruler of Dos Pilas, Sina’n - Ti ‘K’awill.

The Sihyaj Chan K'awiil Vase will be on display. Dated to the Late Classic Period (600-900 AD), the vase depicts obese ruler, with an elaborate feather headdress and a mask of a huge toad, with its own headband of the "Jester God". Behind him, we see a bench and an obsidian mirror where he sees himself. The associated hieroglyphic text identifies him as a ruler of the Motul de San José polity: 'Ub'aah joyal Sihyaj Chan K'awiil k'uhul "Ik" ajaw "the image (of the) inauguration (in the power of) Sihyaj K'awiil Chan, divine lord (of the Polity) "Ik". Due to the scarcity of carved stone monuments, the historical reconstruction of the royal dynasty at the "Ik" polity (Motul de San José, Petén), has depended on the courtly scenes captured in the polychrome vessels of the region. A characteristic feature of the vessels made in the region of Motul de San José, is the type of masks used by the characters. 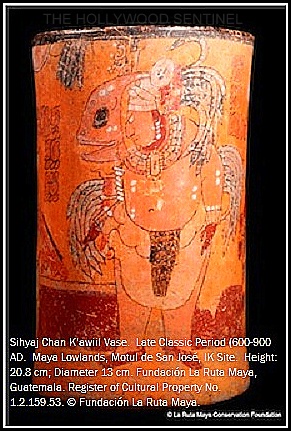 Several outstanding examples of dance masks and folk saints drawn from the collection of Xipe Projects will be on view. These masks represent the continuation and transformation of ritual mask use among the post-conquest Maya of the nineteenth and twentieth centuries and, as are many others pieces featured in the exhibit, among the finest examples in existence. For the Maya, the mask signified the point at which the world of the spirit could enter the material world. Their ritual spaces; temples and pyramids, were profusely adorned with masks of the gods, and the rituals enacted in those spaces were performed by masked dancers whose elaborate masks and costumes enabled them to “become” the animal spirit personage or god for the ritual. One such performer is depicted in the Crouching Masked Jaguar figure.

The image of the mask can also be found on Maya religious sculpture such as the numerous incensarios featured in this exhibit. The incensario literally turns matter -copal resin- into spirit, as the smoke that rises to the heavens. Like the mask, the incensario can be understood as a religious interface, the point where matter turns into spirit.

The Spanish conquistadores and the missionary priests who violently attempted to extend the European conquest into the souls of the Maya, found numerous, nefarious ways to link pre-Columbian Maya religion to European Christianity as a way to both covertly and overtly try convert the indigenous people. For example, they used Spanish folk dances, notably those recounting the expulsion of the Moors from Spain, to “replace” the ritual masked dance of the Maya.

Made from natural fibers and dyes, Mayan textiles illustrate trade routes, and the economic flow of goods and products. The textile trade in many ways fueled the economy of Guatemala during the Colonial Period. The Mayans in this area produced Cochineal, a red dye made from a native insect, which was an important export product during this period. Another dye, Murex, a purple dye produced from a shellfish was used primarily among royalty. But it was indigo that was used prominently among the Maya. This dye, when mixed with a particular clay produced the iconic Mayan Blue color seen prominently on ceramics and monuments. Treasures of the Maya Spirit will feature thirty 19th and 20th century examples of ceremonial garments.

Textiles in Maya society were a significant form identification. Weaving techniques and motifs indicated where a person was from and their place in society. In Post-Columbian times, these garments (produced from the 22 different lingual regions in the Mayan Nation) helped the Spanish designate where people were from, and thus helped to enforce control over the people’s movement.

Traditionally used by farmers, for hunting small game while protecting their fields, and young boys for sport, the slingshot illustrates the craftsmanship and artistry ascribed to simple objects in Guatemala. Traditionally carved by men, slingshots provide snapshots of an evolving culture, graphically illustrating a convergence of exterior and interior influences. Slingshot motifs in modern art include depictions of animals, mythological beings, religious figures, animated characters, and comic book superheroes. It is this thematic subject matter that has turned Guatemalan slingshots- like their African counterparts, into collector items. Their styles can vary greatly, and many pieces are reminiscent of the work of the modernists including Picasso and Brancusi, where we can see the effects of primitive art.

Artworks featured in Treasures of the Maya Spirit, will be on view at the upcoming new museum; The Museo Maya de América, which will be located in Guatemala City. The museum, slated to break ground in 2016 is expected to become the leading venue for the public to view objects, artifacts, artworks, textiles, and information on the history and culture of the Mayan civilization. The institution is intended to be the largest museum of its kind, with approximately 60,000 square meters of build-out (more than 600,000 square feet), a construction budget of $60 million (USD), and designed by Harry Gugger Studios of Basel and Over, Under of Boston with Seis Arquitectos of Guatemala City as the architect of record. A scale model of the museum will be on view in Treasures of the Maya Spirit. Designed as contemporary expression of Mayan architectural elements, the Museo Maya de America features a central court reminiscent of a cenote, a type of natural sinkhole common in the Yucatan, and held sacred by the Maya.