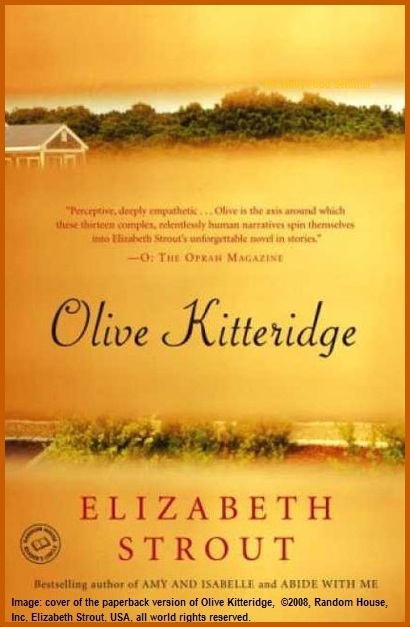 Olive Kitteridge, the 2009 Pulitzer Prize winner for a work of fiction, could be called a hybrid. It doesn’t have the grand narrative arc which defines a novel, but each short story/chapter is more connected than a traditional collection of short stories, which are generally linked through repeating themes rather than a singular character. Following author Elizabeth Strout’s multi-layered, multi-angled depiction of the titular character through thirteen individual, chronologically ordered stories, Olive is introduced as Henry’s ill-tempered wife, a peripheral character in the pharmacist’s uneasy attraction to a young employee, Denise, whose husband was killed by his best friend in a hunting accident in their small town of Crosby, Maine. Olive’s domineering qualities are used to a positive result when she inserts herself into the private turmoil of a former student of hers, whose mother had committed suicide, as he sat in his car near the edge of the ocean, and contemplated following her path. Mrs. Kitteredge invited herself in to Kevin’s car, serendipitously started up a conversation about suicide, revealing that her father, too had committed suicide. When she finally leaves Kevin, another distraught individual, a young woman who had gone to school with Kevin, takes the same course of action and Olive screams for Kevin to come to her rescue, which he does by sliding down the rock pile and jumping in the icy water to save Patty while Olive calls for medical assistance.

The third story of thirteen, The Piano Player, is a character sketch of the sad, alcohol-soaked life of small town performer Angela O’ Meara, who is always the mistress and never a wife. The only appearance that Olive and Henry make is walking through the restaurant Angela performs in. In Crosby, everyone knows everyone and all their dirty little secrets. Or, most their secrets. Olive’s nasty, irrational side is directed toward her son Christopher’s first wife Suzanne. No one would have suspected the matron of stealing and throwing away Suzanne’s bra and one shoe, in addition to ruining an expensive sweater with magic markers. She justifies her hostility with the rationale that “no one should think they know everything.”

In the remaining stories, Olive is shown as matronly as she tries to save an anorectic teen from starvation, a victim as she and Henry are taken hostage by thugs in an act of random violence at a local hospital where she has been admitted for food poisoning, patient as she deals with her husband’s decline and dementia, and finally, reborn as she finds love anew with a man she never thought she’d give the time of day to: a Republican. The idea that each of us play many roles in life which complement and contradict each other is nothing new; what is innovative in Strout’s work is the formal means by which she shows us Olive’s complexity. Easy to read and always engaging, Olive Kitteridge is a highly recommended read.

© 2013, The Hollywood Sentinel and Moira Cue