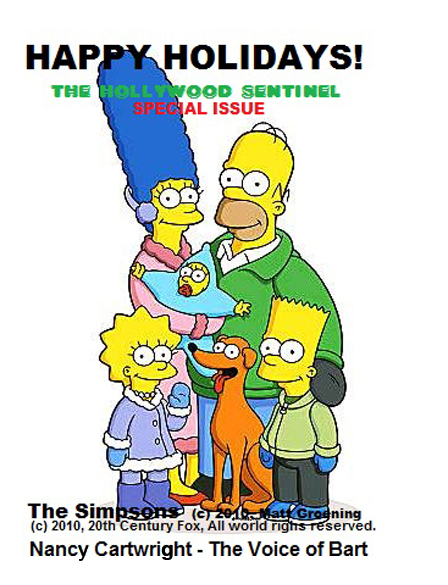 It seems like 2010 went by so quickly. What an amazing year this was! I want to thank all of our great clients, and all our new business and producing partners. Your trust, friendship, and professionalism are greatly valued. It’s an incredible time to be alive on this planet, thanks to the incredible people we know, including you here, our readers. We at the Hollywood Sentinel intend to make 2011 our best year ever. We don’t consider this just a website--it’s a communication of thoughts, feelings, and art. It’s a part of our life to yours and we thank you for being here with us for another great year. As always, you can e-mail us in the box at the bottom of this page for any thoughts or suggestions.

“The person who acquires the ability to take full possession of his own mind may take possession of anything else to which they are justly entitled.” Those words were wisely spoken by Andrew Carnegie, one of the richest men that ever lived, over a hundred years ago. If that is true, then why do so many people believe in luck, and throw their chances of success up to the wind?

Have you ever had someone tell you “good luck,” when you know your success has nothing do with luck? Especially in the entertainment industry, we hear those words way too often. The fact is, the most successful in Hollywood, even the ones who claim they were just lucky, were not lucky; they were calculated, even if they did not give conscious attention to being calculated. If they did succeed but do not know how they did it, then they did the right things despite themselves. But these same people might not be able to repeat their success, not because they are unlucky, but because they are ignorant of how they calculated their own right actions.

The words ‘good luck’ should be erased from your vocabulary, because luck is defined as ‘unpredictable forces which work for or against someone.’ Luck refers to chance. Even those top professional gamblers, who supposedly have ‘luck’ with a good outcome, are not lucky. Most of the pros have studied math, statistics, or at least thousands of possible scenarios of probabilities based on calculated evaluation. They also study human behavior, facial gestures, mannerisms, and eye, hand and body movement to read if someone is bluffing or not. And the non-pros who don’t win, are not unlucky, they are ignorant of odds set up against them so the house will usually win, which they should—after all, they are a business, and business are in business to make money at a profit, not a loss. So don’t adhere to mere luck. The more you believe in luck, the more power you give to forces outside your control.

Does luck, that is, chance, which is to say, an unknowable outcome, even exist? To be sure, one cannot know every particle of every universe, and so, chance by this observation may be said to exist. But is good or bad luck the chaos of chance, or merely lack of knowledge, omniscience, or skill? It is true at least that luck does not exist to the extent that many people consider it so, and does not exist to the degree that many people wish it upon others. Luck is over estimated, because there are far fewer instances of forces that occur to create a good or bad outcome that is out of one's control than many people realize. We are generally in control to the degree that we consider we are. And we are usually lucky or unlucky, to the degree that we consider luck to even exist and to the degree that we predict one outcome of good luck or bad luck more than the other.

Even death, if you consider that a bad outcome, is often in your control to avoid. We have all already avoided death millions of times. Just by being careful in our car, or crossing the street, we are taking control over a bad outcome. There are educated and uneducated moves, and there are no moves. To move without knowledge of one's environment is usually not chance, it is merely lack of knowledge. To not move at all is to die. Educated moves are in your control, which destroy the existence of luck--a luck which results in an unknowable outcome. Educated moves help destroy the chance of failure. And one of your goals should be to eliminate failure.

Determine what you want to achieve. Cut out any actions that do not lead to your intended outcome. Determine that you can and will have what you intend. Get educated about success. Make a plan and stick to it, breaking down the plan in to clearly defined, manageable steps that you take actions on every day and hour. Get an accountability partner to make sure you follow through. Take action. Do not stop until you achieve what you want.

Andrew Carnegie also stated that, “The average person puts only 25% of his energy and ability into his work. The world takes off its hat to those who put in more than 50% of their capacity, and stands on its head for those few and far between souls who devote 100%.” Do you want to be average? Or do you want to be the exceptional few and far between? I think if you are reading this, then we are alike, in that we want to be exceptional and extraordinary. We are on this planet now, and so we owe it to ourselves to make the most out of every second and live up to our greatest potential.

Here are steps to motivate you to get thinking more about your goals: to make them, organize them, and act on them. Now, you may have read some of these similar things before, but if you are like me, then you can’t get enough of self-improvement and success training, and will appreciate another perspective and approach at it. One cannot improve one's self too much! One cannot be too successful!

1. Image one single greatest thing you can think of that you want to accomplish in your life, one major mark you want to leave on this planet, and imagine that you will not fail in doing it. What is it?

2. Imagine that you somehow obtain one hundred billion dollars. Money is no longer an obstacle for you. What are your top 10 things you will do?

Now, look at these things from all the lists. Your goals need to be in alignment. If they are not, then you need to re-evaluate your goals and consider changing them, to the things which are most important to you.

5. What one story do you want to tell the world? This answer should be incorporated in to your work and further list above.

6. Eliminate the words ‘luck’ and ‘good luck’ from your vocabulary, and refuse to let the notion of unknowable lack of control be a part of your existence. Take responsibility for your life and successes, don't leave them to chance. Focus on knowledge, learning outcomes, and mastering the results of your intentions.

7. Determine what you want, plan for it, do it, and get it. Do not give credence to any action, idea, person, or object that gets in your way of fulfilling your goal. Predict and manifest your highest ideal for the greatest cause, without harming others.

8. Become one of the small percentage of people on this planet who devote 100 percent effort to your work and purpose. No one will leave your mark for you as good as you can.

9. After you make it big, give back to a worthy cause, and also teach success to others.

10. Write us and let us know how you are doing.

“A sunny disposition is worth more than fortune. People should know that it can be cultivated; that the mind, like the body, can be moved from the shade into sunshine.” -Andrew Carnegie