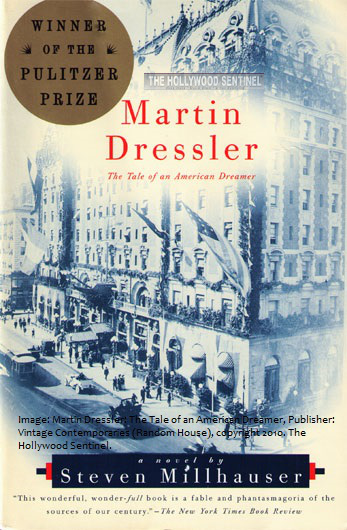 “There once lived a man named Martin Dressler, a shopkeeper's son, who rose from modest beginnings to a height of dreamlike good fortune...he was lucky enough to do what few people even dare to imagine: He satisfied his heart's desire. But this is a perilous privilege, which the gods watch jealously, waiting for the flaw, the little flaw, that brings everything to ruin, in the end.”

Martin Dressler: The Tale of an American Dreamer was published In 1996 and won the Pulitzer Prize for fiction in 1997. If ever there was an antithesis to the work of Ayn Rand, this is it. Author Steven Millhauser provides an unnerving critique of American exceptionalism through the title character's life and perspective.

Set in late nineteenth century New York City, a young boy (Martin) starts his career in business by working for his father in a cigar shop. But this is no ordinary boy. This boy personifies the entrepreneurial spirit of the time, a time of expansion and optimism, when the skyline was changing faster than fashion's hemlines.

His social and economic ascent begins while he is assisting his father, coming up with new ways to market cigars. He quickly moves up to being a bellboy in a good hotel, to eventually owning and building his own hotels. The problem is Martin gets everything he wants so quickly that he wants more, and in wanting more, and more, and more, and getting it—whether his object of desire is his eventual wife, Caroline Vernon, a tryst with a low class chambermaid, or the best table at a prestigious restaurant—he essentially goes mad. When he builds his first hotel it is a tremendous success. But he must always outdo and reinvent himself, and when he attempts to create a mammoth hotel named the Cosmo, an artificial environment replete with deserts, exotic animals, and a shopping mall, he replaces, instead of augments, reality. And (spoiler alert!) the whole of his creation crashes down before him.

What makes the story worth reading is the identification readers feel while rooting for Martin. Everyone can sympathize with wanting to grow beyond one's station in life, at least secretly, if not overtly. Martin's successes “feel” justified by his (our) rage against poverty and meritocracy, so that by about two-thirds into the novel, one wishes nothing but the best for Dressler. One feels less ambiguous because Martin is a complex and contradictory person; in other words, real. His fears are always under the surface. He struggles with cognitive dissonance between the family he was born into, versus the high society he works to join. His anxiety becomes our anxiety. The reader places his bets on Dressler despite having been warned in the very beginning.

By the time you begin to doubt your faith in Dressler, it is already too late. A river of magical realism begins as a trickling, subterranean vein. Outwardly appearing as the embodiment of the American dream, everything Martin touches winds up covered in pixie dust. The shift from reality to fantasy is gradual until Dressler's marital woes explode in a violent narrative cataclysm. Then one realizes that one's hero is proverbially “lost at sea.” Unfortunately, readers can do nothing to rescue the hero, or, if you prefer, anti-hero.

There is no redemption and no way out. Genius is condemned. The silver lining? This book teaches an important lesson about temperance and acceptance, as well as reminding us that those we envy may not, in actuality, be worth it. And if a few mites of pixie dust remain undetected on your shirt sleeves, so much the better. A little magic goes a long way.


This content is © 2014, The Hollywood Sentinel / Moira Cue, all rights reserved.