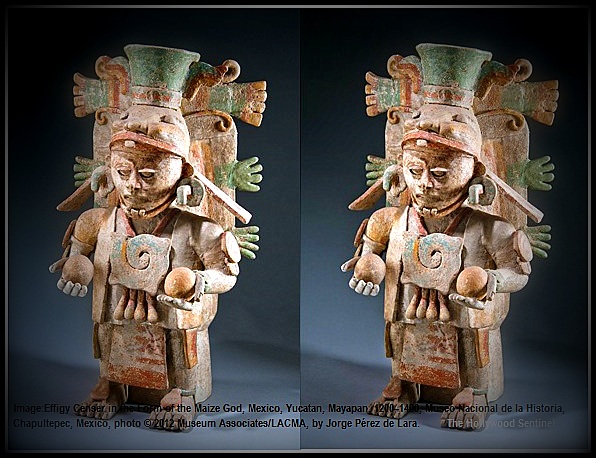 LACMA: If you have not been to LACMA (Los Angeles County Museum of Art), you owe it to yourself to go. Take an entire day, bring a picnic lunch, and get ready for a great day of art and culture.

Children of the Plumed Serpent: The Legacy of Quetzalcoatl ran from April 1st to July 1st this year at LACMA. The Feathered Serpent, a multi-faceted deity believed to first be worshiped in what is referred to as the Olmec civilization of ancient Mexico, as early as 900BC, was represented in many magnificent works of art and statue. The plumed one was deified for many years, up through the North of modern day Mexico City in the year 1BC and AAD, spreading throughout Meso-America, and called by some Quetzalcoatl. The Feathered Serpent represented art, life, the wind, knowledge, the dawn, and the planet Venus among more for the Aztecs.

This show displayed some uncovered, and others—mostly glass encased ancient works of art—depicting Quetzalcoatl and The Feathered Serpent throughout ancient history, with stunning, beautiful works of stone sculpture, pottery, masks, jewelry, paintings, and more. An excellent show revealing the amazing art, culture, history, and spiritual beliefs of the Aztecs and beyond, this was well worth seeing, and if you can ever get the chance to see it anywhere—go. If you missed the show, you can at least study about the subject in the history and art books, and do be sure to visit MOCA for other incredible events.

MOCA Grand Avenue is another great place to visit in L.A., and while much smaller than LACMA, is another one of my favorite places to go in Los Angeles, where amazing art abounds.

The Painting Factory: Abstraction after Warhol, April 29–August 20, 2012 at MOCA Grand Avenue, Los Angeles, California. This was an exciting exhibition that I spent a lot of time viewing, which explored, according to MOCA, "The recent transformation of abstract painting into one of the most dynamic platforms in contemporary art, featuring works by Tauba Auerbach, Mark Bradford, DAS INSTITUT (Kerstin Brätsch and Adele Röder), Urs Fischer, Wade Guyton, Glenn Ligon, Julie Mehretu, Seth Price, Sterling Ruby, Josh Smith, Rudolf Stingel, Kelley Walker, Christopher Wool, and Andy Warhol. Most of the works here showed influence by Warhol, and many of the works stood on their own as masterful pieces by outstanding artists. The works by Warhol were brilliant, and—contrary to some—inspired and well worth seeing, as was this great show itself.

Cleopatra The Exhibition, at California Science Center, LA, CA. May 23 - December 31, 2012. We began this show with seeing 'Mysteries of Egypt,' an IMAX shot film by National Geographic that was actually made in 1998, and re-packaged with a new cover box and alternate advertising. Due to the fact that The Hollywood Sentinel does not give negative reviews, and due to the fact that this film blatantly stated that Egyptians' did not believe in curses—which is incorrect, this film is not being reviewed.

The exhibit itself, produced by the same producers of the Tutankhamen exhibit, is stunning, and a must see. Jam packed with attendees nearly elbow to elbow, in a dark exhibition room with beautiful blue lighting illumination, one can actually smell and feel some of the very essence of this amazing time in history in ancient Egypt— the most fascinating of all lands as it exudes forth its energy from a number of the uncovered stone sculptures. With most statues, jewelry, and artifacts here in glass cases, others stood free, with two statuary pillars towering tall in their majestic power over the gazing crowd at the pharaohs feet. For any fan of art, this show is stunning. For any fan of history, the show is essential, and for any true fan of ancient Egypt, it is a legendary must see event that is worth seeing again and again, and you have until the end of the year to do just that.

The Hollywood Sentinel, ©2012, all rights reserved.